“Why do we laugh at men in dresses?” This was one of the questions that Ann-Christine Ruuth asked the audience at a packed lecture that was part of Linköping’s Rainbow Week. 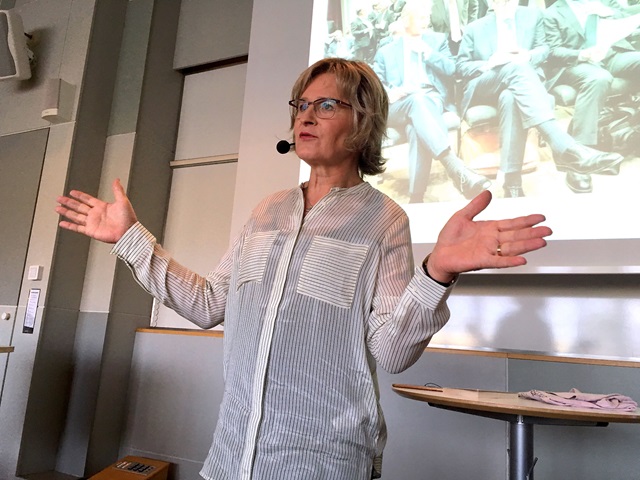 At the Valla Library’s exhibition on LiU’s efforts to advance gender equality, there is a poster presenting a lecture by Ann-Christine Ruuth. Until she was in her sixties, she was known as Åke – a male pastor in Teleborg parish in the south-Swedish town of Växjö. Consequently she has considerable experience of how we think about identity. For instance: How do you actually know who you are? And is it better to be hated for the person you are, than to be loved for the person you’re not?

The reason we celebrate Pride 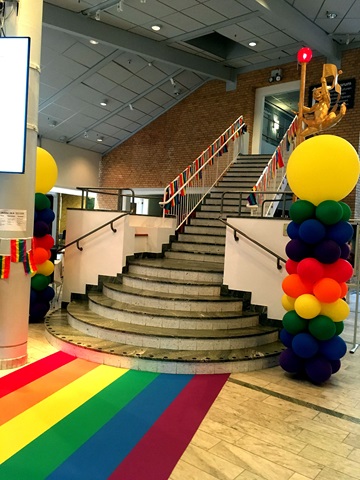 “Dear Grandmother Ester, now you’re surely turning in your grave!” exclaims Ann-Christine, continuing that nowadays we consider it normal to see women wearing trousers, but that in her grandmother’s day this was unthinkable. “It is every person’s deepest wish to be affirmed for what he or she is, and to be truly loved.” This is a quote that Ann-Christine believes in, from the munk and writer Wilfrid Stinissen.

The lecture shifts between existential questions, social norms and reviews of various concepts, including HBTQ. Ann-Christine says that it was transgender people who first resisted the police, who were harassing HBTQ people at the Stonewall Inn in New York in 1969. This is, she says, the reason we celebrate Pride today.

Ann-Christine sees the second of August 2010 as her coming out day. This was the first day she walked down a populated street wearing women’s clothes. She explains how that felt:

“It didn’t feel like anything at all. It was very ‘unstrange’, and no one looked at me.”

But the journey to becoming herself didn’t end there. Ann-Christine, who at that time was still known in her parish as Åke, had many more people to come out to.

“I had been very much afraid of myself, and now I had to face everyone else’s fears.”

Ann-Christine Ruuth stresses the importance of not misgendering. “He can go first, we’re not in such a hurry,” someone said in a shop, referring to her.

“If you’re uncertain of someone’s gender, just ask. But don’t ask about the person’s genitals, that’s private. A person’s gender identity is part of their own experience,” says Ann-Christine. She also recommends the documentary Vägen till Ann-Christine (The Road to Ann-Christine) on SVT Play (in Swedish). Her daughter, Ester Roxberg, has also written the book Min pappa Ann-Christine (My Father Ann-Christine), which was for sale at the lecture.

The sold-out lecture was organised by the Forum for Gender Studies and Equality, the Strategy Group for Equal Opportunity at Linköping University and the Church of Sweden, Diocese of Linköping.