Capturing photons on a plastic roll 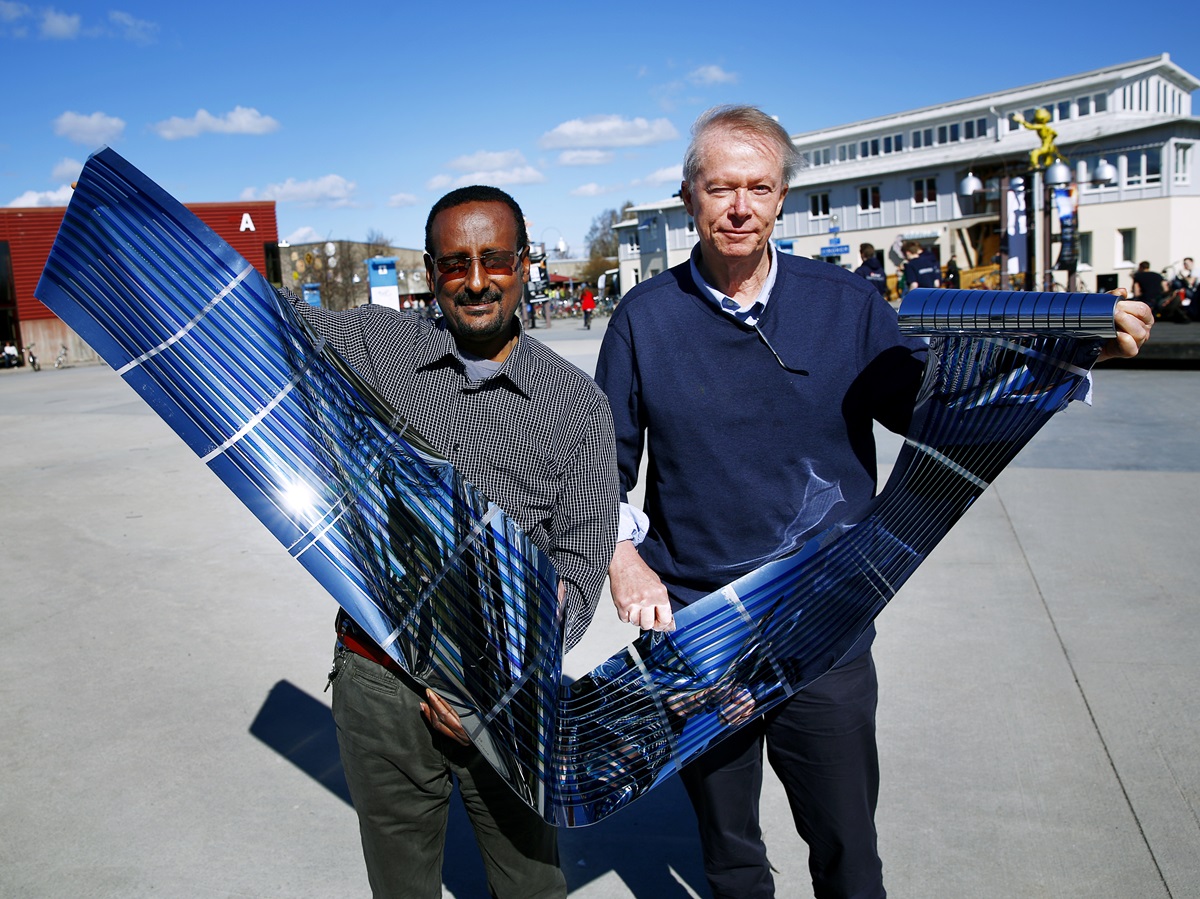 
And standing in the middle of a blustery open space at Campus Valla, different types of renewable energy are clearly evident. The wind tries to pull the long piece of plastic foil out of their hands, the foil casting dazzling reflections all around. This foil contains solar cells made of plastic, and is the first of the researchers’ two-part vision.

For Professor Inganäs, this story began when he was a doctoral student at Linköping University.

“I was focused on biophysics and I got to work with chlorophyll, which was well in line with my interests. I moved closer to the soft materials and their many mysteries. I filled entire columns with parsley and dandelions – which grew wild where the Physics Building now stands – and extracted chlorophyll a, which I placed in thin films.”

The aim was to get electricity from sunlight. But the results were modest. The efficiency was in the thousandths of a per cent.

Chlorophyll, a green pigment, is like solar cells for plants. It captures photons from sunlight and transports electrons to the final destination: sugar packed full with chemical energy. At that time, around 1980, this process was still not fully understood.

Nowadays it is, but copying photosynthesis is still a long way off. Instead different types of solar cells have become the most practicable way of tapping into the vast quantities of solar energy that wash down over the earth.

After 60 years of R&D, silicon-based solar cells cannot be developed much further. Subsidies have made them reasonably inexpensive and they have been put into use in large-scale facilities as well as on residential roofs – even in sun-deprived regions like Sweden.

Prof Inganäs is a successful player on another field: the organic solar cell, based on conductive plastic materials, so-called conjugated polymers. That this could exist was a revolutionary news 35 year ago, earning its discoverers a Nobel Prize. But no one could imagine that these materials could also be soluble. And solubility is what makes the concept competitive – the organic solar cells can be produced in a printing press on a flexible surface. It’s cheap, convenient and resource efficient. 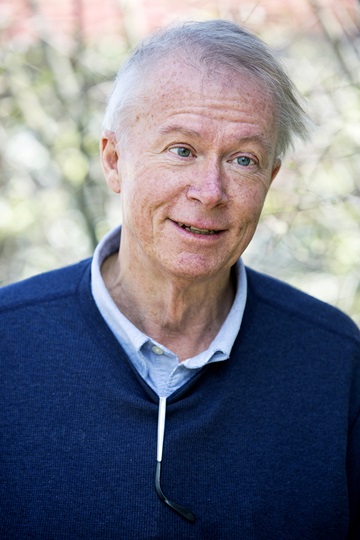 “I have always been interested in energy issues, in finding alternatives to large-scale energy production, and in energy systems that are sustainable in the long term. Because we have to think about future generations.”

ogether with doctoral students and young researchers from many countries, Prof Inganäs has gradually built a knowledge base, testing materials and prototypes. The publication list has grown long and sufficient amounts of research funding have flowed in.

Soon it will be time for full-scale testing. The solar cells are produced on a roll in a printing press. All ingredients are in liquid form and are printed on plastic foil. The finished product can be installed on roofs, windows and walls, or in special facilities on the ground, measured in square kilometres. Tekniska Verken, a Linköping energy company, has placed an initial order – for 500 square metres.

But it’s not up here in Scandinavia that Prof Inganäs sees a big potential. He just returned from China, which recently submitted a tender to build 26 nuclear power plants in South Africa - the only country in southern Africa with a well-developed electricity network. But most of Africa does not have such networks. The potential is that of creating a local energy supply, without large investments in infrastructure. Skipping one phase of development, as happened with telephony.

Prof Inganäs and his former postdoc Shimelis Admassie, now associate professor at Addis Ababa University, have published an article in Advanced Materials where they sketch out an electrical system that could supply power to 600 million Africans who currently have none at all. In addition to renewable energy sources such as solar cells and wind turbines, there is a need for a small-scale method that enables them to locally store the energy produced when the sun shines or the wind blows. Once again, Prof Inganäs has an ace up his sleeve.

The cheapest form of local energy storage is to pump water to an elevated pond during the day, then to let it pass down through a turbine at night. But around the Sahara Desert, water is in short supply. Instead the two researchers are launching a wooden battery, a supercapacitor, where lignin (found in wood) replaces the expensive metal oxides that hold the charge in conventional batteries.

Once again they found inspiration in photosynthesis, where electrons charged with solar energy are transported by electrochemically active molecules, quinones. Out of a mixture of these simple, inexpensive components Prof Inganäs and his Polish colleague Prof Grzegorz Milczarek created a thin film that functions as a cathode in the battery. This work was published in the top-ranked journal Science.

“Sun and wooden batteries are a sensible combination, and in settings like Ethiopia this technology becomes relevant. In countries like Sweden they can be combined with mature technologies, but here the ideological aspect comes into play: lots of people who dislike the large electricity suppliers are looking for alternative solutions,” explains Prof Inganäs.