“… the job market is booming here!”

Christos Kalaitzis, a 29-year old student from Greece is now in his second year of the Master Intelligent Transport Systems and Logistics, which is being taught in Norrköping. 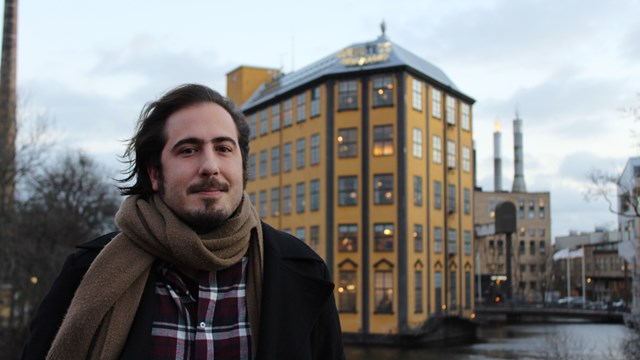 Christos explains that the programme is very interesting as it requires the students to strengthen many skills. Through both individual- and group work students learn to cooperate and make use of each other’s knowledge and abilities. Also there is a large range of different nationalities, this gives the program an extra dimension according to Christos.

“The future high-speed train that is going to run through Norrköping is one of the reasons why this is perhaps one of the best places to study traffic and logistics; the job market is booming here!”.

Moreover, real-life projects make the program rather engineering- than theory-based. Christos talks about a student project where they investigate the traffic flows in a major city and find methods to minimize traffic in the center and instead make people choose another route. The students are not only concerned with the most efficient ways of transport; topics like sustainability and safety are of great importance, too. With Sweden having the safest roads in the world, that specific area remains a challenge.

Christos doesn’t only find a challenge in the subject of his studies; the structure of the programme asks him to be independent and take initiatives himself. Often, the students get a problem and are asked to figure out what the best solution is by reading and applying the literature. For his Master Thesis, Christos would like to focus on public transport as he like to help out his fellow citizens.

“After my graduation I would like to work around Norrköping or somewhere else in Sweden. I like it here, people are friendly and the country offers me a lot of stability and safety and that’s exactly what I need right now. The program, on the other hand, accounts for much flexibility. Apart from that, I’m happy with my life here; I’ve got a lot of Swedish friends and Norrköping is a nice town, especially for someone interested in traffic engineering!”