Could the current epidemic of obesity be traced back to spraying DDT in the 1950s? Entirely possible, according to epigenetics – the new branch of research that  posits that acquired characteristics can be passed down from generation to generation. As a young researcher, Carlos Guerrero-Bosagna found himself sitting in a tight spot. 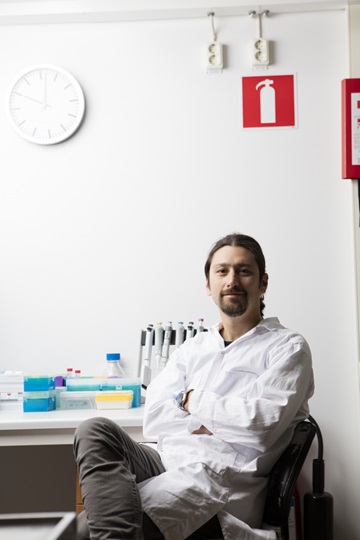 Carlos, now nearly 40 and a postdoc at Linköping University, began studying biology at a university in Chile. In his faculty, there was a professor with controversial ideas about evolution – at a time when the concept of the unchangeable genome was extremely strong. But it awakened an interest in Mr Guerrero-Bosagna in a phenomenon called epigenetics. Armed with a grant, he could make his way to Sydney to learn everything about DNA methylation – a chemical process that would prove to be a strong impetus in affecting gene expression. Experiments on mice showed that females who ate a feed with a high content of phytoestrogens, a plant compound similar to the female sex hormone, produced offspring with altered DNA methylation, early onset puberty and unclear differences between the genders.

“Gradually my passion took me to the United States.”

In 2005 an article was published in Science. It was the first to show how diseases caused by chemical pesticides could be passed on to the next generation.

Several years before Darwin, the Frenchman Jean-Baptiste Lamarck had formulated a theory of evolution. He believed that acquired characteristics could be inherited. But neither he nor Darwin knew anything about the mechanisms for inheritance. The concept of ‘genes’ was unknown to them both.

“It was a little way into the twentieth century that neo-Darwinism first posited that changes to the genome could only take place by chance via mutations,” Mr Guerrero-Bosagna says.

Mr Skinner’s article one hundred years later – “Epigenetic transgenerational actions of endocrine disruptors and male infertility” – shook the world of genetics to its foundations. Skinner reports on his experiments on pregnant female rats exposed to the pesticides vinclozolin and methoxychlor. This resulted in the males in the first generation suffering from reduced fertility with fewer, poorer sperm, a defect that was passed down to virtually all the males in the following generations.

Carlos saw immediately where he wanted to continue with epigenetics research. Skinner took him on as a postdoc at Washington State University in Pullman, and for five years they published a series of studies explaining how environmental factors affect genomes.

“DNA was previously something untouchable in the nucleus of the cell. For epigeneticists, DNA is involved in a continuous chemical process.”

There are processes that can control how the genes are expressed – that is, if they are ‘on’ or ‘off’, active or silent. One such process is DNA methylisation, in which methyl (CH3) groups bind with cytosines – the building blocks in DNA chains. This affects which proteins are built in the cells with consequences in the form of altered properties and appearance, and diseases. But the conditions necessary for them to be passed on from generation to generation is that they are present in the sex cells.

In the lab at Pullman, Guerrero-Bosagna and Skinner studied the effects of exposure to fungicides, other pesticides, dioxin and plastic. It became apparent that they caused unhealthy changes that were passed on to several generations, for example in reproductive disease and obesity.

“For four days at the onset of pregnancy, the sensitivity to environmental impact was the greatest.”

“The epidemic of obesity we are now seeing could be the result of the use of DDT in the 1950s and 60s. We can probably expect to see more unhealthy changes owing to environmental factors. Its actually quite terrifying,” Mr Guerrero-Bosagna says.

For the last year and a half, he has been a postdoc with professor Per Jensen at the biology department of Linköping University, specialising in how stressful environments can produce epigenetic effects in chickens. One very concrete application here is finding markers in the genome that can reveal if an animal has been mistreated. Looking to the long term, he wants to build his own research group and use the domestication of chickens as a model for the study of how epigenetic affects can influence evolution.

“DNA methylation is a strong force for mutations that can change the genome itself,” he says.