Cubic silicon carbide is an ideal material for the power electronics of, for example, the electric motors used in cars. Until now, however, it has not been possible to manufacture the required amounts of the material in sufficiently high quality at a reasonable price. The new Horizon 2020 project is to solve this. 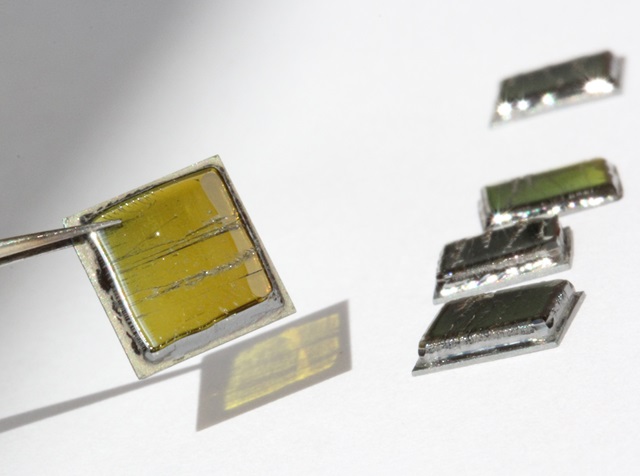 Kubisk kiselkarbid perfekt för kraftelektronikProfessor Rositsa Yakimova, Docent Mikael Syväjärvi and the research group at the Semiconductor Materials Division were among the first to manufacture wafers of high-quality cubic silicon carbide. Together with 13 partners from six European countries and Japan, they are now developing tools to make it possible to manufacture cubic silicon carbide on a substrate of silicon, without large numbers of crystal defects arising.

The Horizon 2020 programme Challenge brings together leading European researchers in silicon carbide and small and large companies. The four-year project is led by Francesco La Via, of the Italian Consiglio Nazionale delle Ricerche.

The aim of the project is to develop functional semiconductor materials for new power components that will make the motors used in electric cars more efficient, with lower heat loss. Other possible applications are air-conditioning systems and freezers.

“Many of us have worked in the field individually, but this is the first time we will be making a united effort,” says Rositsa Yakimova.

It is hoped that the project will result in a major stride forward that will affect the future market within power electronics. At voltages lower than 100 V, electronic components that use conventional silicon are most suitable, and this technology has been in use for more than 50 years. At voltages above 1,200 V, electronic components using hexagonal silicon carbide, 4H-SiC, are now commercially available. These components are faster, but more expensive. The consumer market is highly price-sensitive, and it is here that cubic silicon carbide, 3C-SiC, comes in.

It turns out that 3C-SiC is most efficient at voltages between 600 and 1 200 V: this is the range of voltage in which the charge carriers have the greatest speed. It is cost-effective to manufacture cubic silicon carbide, and it can be manufactured on large wafers with a low impact on the environment.

“After many years’ research, we have developed a method to produce cubic silicon carbide with few defects, and our material is to be used as reference. In the project centred on power electronics, the cubic silicon carbide must be grown on, for example, silicon, but we believe that developments will lead to other applications in which the quality of our material gives advantages,” says Mikael Syväjärvi.

Until now, defects in the interface between the cubic silicon carbide and the silicon substrate have been a problem. The research groups involved in the Challenge project now have four years and EUR 8 million to solve this problem.

Research into white LEDs made from silicon carbide is gaining fresh impetus. It was the Technical University of Denmark who acquired funding for the initiative that they are running in collaboration with LiU researcher Mikael Syväjärvi and others.

Large research groups are studying materials as silicon carbide, nitrides and graphene. One major area of study is how manufacturing technology influences the properties of various electrical, optical and magnetic semiconductors.

The researchers study the properties and structure of graphene and of other two-dimensional materials, such as MXene. LiU researchers have developed a unique method to manufacture graphene on silicon carbide.