This year’s Alumni of the Year at Linköping University are Suad Ali, expert on Sweden’s refugee quota, and Thomas Lunner, one of the researchers behind the world’s first digital hearing aid. They will receive their awards at a ceremony on 11 November at Campus Valla. 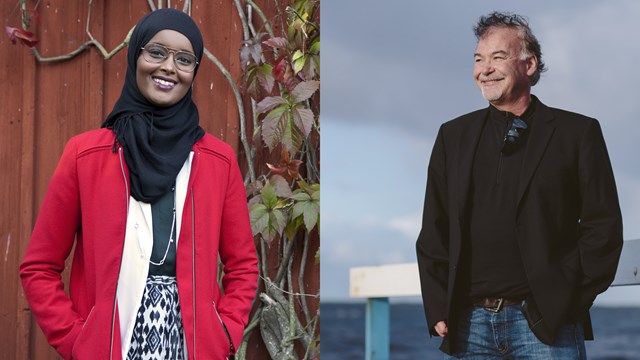 Suad Ali studied political science at LiU. After her studies she has advanced rapidly in her career, and is now expert on Sweden’s refugee quota at the Swedish Migration Agency.

As a child Suad Ali fled from Somalia to Sweden. At an early age she decided to become a leader, so she could influence world developments. This year she features on the Swedish business magazine Veckans Affärer’s list of young super-talents, and she is a columnist at the Swedish magazine for executives, Chef.

Thomas Lunner studied applied physics and electrical engineering, and after that he completed a doctorate in technical audiology. The technology he developed during his degree project enabled the Danish company Oticon to develop the world’s first digital hearing aid in 1995.

Today Thomas Lunner is senior researcher at Eriksholm – Oticon’s research centre – and adjunct professor of cognitive hearing science at LiU. In the past few years he has worked to integrate cognition with hearing aid production, which recently resulted in a new type of hearing aid that gives a more complete sound landscape.

On Friday 11 November, Suad Ali and Thomas Lunner will come to Campus Valla to receive their awards and give a short presentation to students, staff and alumni.