“We usually talk about ground-breaking research, but now we can
devote ourselves to neck-breaking research,” says Magnus Berggren, professor of organic electronics who was named as one of this year’s Wallenberg Scholars and thereby receives SEK 15 million (ca EURO 1.7 million) research funding to spend as he likes.
The intent of the Wallenberg Foundation with this programme is for some of the leading researchers in the country to spend five years working as they please on more adventurous, long-term projects. It’s a task Magnus Berggren is more than happy to take on.
“It’s an unbelievable luxury with this kind of money, where you are free to choose who you work with, and also to halt research quickly when it’s not working,” he says. 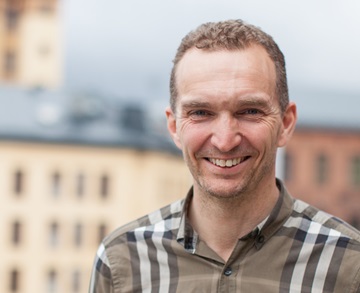 One breakthrough has followed another in Berggren’s research team. Over a year ago the team came up with the first ever printable low-voltage transistor, made of inexpensive plastic. In the spring they presented the first chemical chip, an innovation that has made waves across the world and which is now leading to a number of new collaborative research projects. Charge carriers in the chip consist of chemical substances with different functions, which means it has become possible to control and regulate the signal pathways of cells in the human body.

“Bioelectronics is one of the most exciting areas we have at present; we have a strong team but we want to make it even stronger.
The great challenge is to speed up the bioelectronic circuits. They need to get faster if they are to be of real use, in areas such as prostheses or to ward off an epileptic seizure."

“We are now producing different kinds of components and circuits that measure and control at the same time, and which mimic the body’s own signalling. At every synapse in the body a signal is delayed by about 1 ms. If you step on a nail it takes around ten milliseconds before you lift your foot and it is this speed we want to beat. Within a few years our chemical circuits will be more rapid than the nervous system,” he says.

The other area of speciality deals with significantly more fundamental research.

“We have been doing some work on the side of our other projects, the “Friday experiments”, where we have tried out some slightly crazy ideas and some of them have turned out quite well. We didn’t really understand what was happening but now things are coming to fruition. It has to do with a new form of controlling and regulating electrochemistry in conductive polymers and at the moment we are just trying to understand how it works. It is a project that is there for us to learn from,” he explains.

Berggren can now focus on what he calls neck-breaking research - ground-breaking sounds too frivolous.

“Only when you have this sort of money do you dare take the whole team with you and test something completely new.”

But then it should be permissible to fail, shouldn’t it?
“Yes, and there must be an understanding in the team that it is no one's fault if a project is closed down. Over the years you get better at killing off projects that aren’t working. If a graduate student has been working on a project for a couple of months it’s usually no problem,” he says.

Berggren’s own team currently comprises almost 30 researchers and graduate students; seven posts have been announced so the 30 mark will be passed next year. Acreo has forty or so people working on printed electronics and the plan is to pool resources.
Corridors and closed doors are clearly not for Magnus Berggren. It’s most fun in the lab. And so the organic electronics team and the people from Acreo will be moving in together this summer, into a large office landscape in Kåkenhus, which used to be the library and is now a student area.

“There will also be plenty of meeting rooms where 5-6 people can stand round a board, discuss a problem and kick around ideas without disturbing anyone. There is a lack of this sort of meeting space at the University.”

Since 2009 the Knut and Alice Wallenberg Foundation has selected ten scholars each year, but this year a total of sixteen researchers will be sharing a total of SEK 240 million (ca EURO 27 million). The universities nominate the researchers and a panel of scientists then reviews applications. The Wallenberg Foundation has so far distributed SEK 660 million (ca EURO 75 million), but they will now stop for a few years, according to information from the organisation.