Dogs are masters at communicating with humans. Faced with a
difficult problem, a dog will often seek help from its owner.
Researchers at Linköping University have shown that this behaviour is not learned but is partially congenital.

Over the 15,000 years since the ancient dog breeds were domesticated, they have developed a range of characteristics that today separate them from their ancestor, the wolf. For instance the wolf does not display social skills towards humans to the same extent.

To investigate whether this behaviour is due to growing up together with people or is congenital, researchers tested 500 closely related beagles, raised in the same kennel under the same conditions. 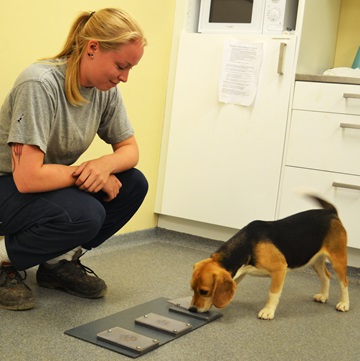 The results were recently published in Genes, Brain and Behavior.

Individually, the dogs were given a box to investigate, in which the researchers had hidden sweets underneath three lids. The dogs were tasked with pushing the cover to the side to get to the treat, which they all managed quickly. But the middle lid was screwed down, so the sweets were not accessible. The interesting thing now was to see how the dogs sought help from Mia, who was present in the room.

”There were big differences in how they reacted. Some dogs behaved like wolves, trying to work independently. Others were completely the opposite and came directly to me for help, although I was a complete stranger to them.” Between these extremes were the dogs that first tried for themselves, before turning to the researcher. Some sought eye contact first; others nudged with their nose to get help. Females and older dogs were more likely to seek help. Mia Persson then analysed the significance of the dogs’ mutual relationship, which can reveal the extent of the hereditary component.

”We found that there is a difference in the dogs. Some resemble wolves while others seek lots of help. Roughly a quarter of this variation is due to genetic differences. The results provide a solid foundation for the next step in the research, where we will determine which genes control these behaviours”, she says. The study is the first where it is essentially possible to exclude that the behavioural differences are due to different experiences of human contact within the dog's families, because all the beagles in the study grew up the same way. Seeking help from and cooperation with humans is a characteristic that is largely congenital, but also can be developed with experience and age.