Gut feeling the key to success

Trust your gut feeling. That was the advice from this year’s Alumni of the Year, Peter Agnefjäll, President and CEO of the IKEA Group, and Elnaz Baghlanian, editor and office coordinator at Swedish PEN. Both gave well-received speeches at the Alumni of the Year ceremony on 3 October. 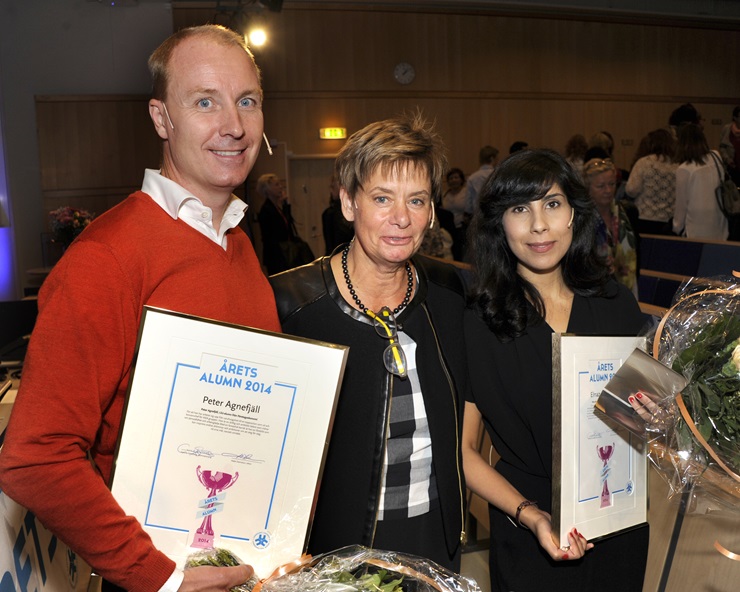 Foto: GÃ¶ran BillesonThe event took place in the C Building on Linköping University’s Campus Valla, where guests mingled, enjoying drinks and sandwiches. Students, employees and alumni then filled the C4 lecture theatre, keen to hear what the two award-winners had to say.

Alumni of the Year uncovering the plateAfter Linköpings Studentspex offered a musical tribute to both Elnaz and Peter, Vice-Chancellor Helen Dannetun emphasised the importance of alumni to the university:

”We put a lot of effort into quality. To attract students, our programmes must be top notch. Our alumni can provide feedback on their programme, but also inspire students.”

Earlier the same day, the Alumni of the Year had attended the unveiling of a plaque engraved with their names, on the alumni’s Walk of Fame outside the Origo Building. The audience in C4 watched a film of the event.


Fights for freedom of speech 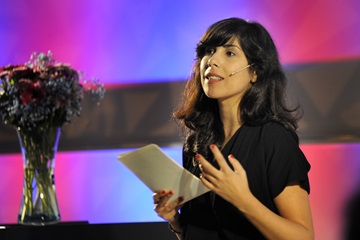 Foto: GÃ¶ran BillesonElnaz Baghlanian was the first of the alumni to speak. She has a degree in literature from Linköping University and is office coordinator at Swedish PEN, a non-profit organisation that fights for freedom of speech. She is also editor of their Dissident Blog, which publishes works by authors censured in their home countries.

Literature has always been important to her.

”When I was five my family left Iran and fled to Sweden. Amidst that chaos I found solace and peace in books.”

Alumni of the Year Elnaz Baghlanian speakingDespite her literary interests, she was uncertain about studying literature. She had a feeling that she should be something ”proper” – perhaps a lawyer, doctor or engineer. But in the end she followed her gut feeling, a choice she has not regretted. She spoke passionately of the significance of literature and the humanities for society. It is not a coincidence that the first people to be persecuted in oppressive regimes are the writers.

”Literature is serious business, a matter of life and death. I’m reminded of this every day in my work for Swedish PEN,” Ms Baghlanian said.

The road to Swedish PEN went via a traineeship at Bonniers – a major Swedish publisher – and various temporary jobs, also in publishing. When Ola Larsmo, chairperson of Swedish PEN, asked Ms Baghlanian if she wanted to be the organisation’s one and only employee, everything fell into place. She could combine her literary interests with her civic engagement.

She concluded by thanking Linköping University for the award, and for giving her the tools that enable her to carry out her work with persecuted writers. 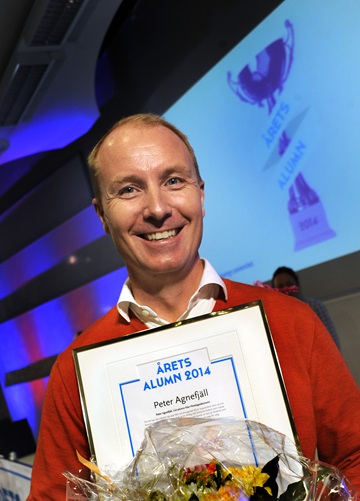 Foto: GÃ¶ran BillesonPeter Agnefjäll leads IKEA’s operations worldwide, as President and CEO of the IKEA Group. He has an MSc in business administration from Linköping University.

He began his speech by looking back at his time at LiU.

Alumni of the Year Peter Agnefjäll with diploma”My years at Linköping University were a fantastic time in my life. I chose this university because of its campus atmosphere, and now that I’m here again today, I see that this atmosphere has got even better.”

After completing his degree, he headed to Älmhult, home of IKEA, where he started IKEA’s trainee programme. He wanted to work in an international company, with products he could identify with. The trainee programme gave him insights into various areas of the operations, and he was keen to continue. He later became head of sales, head of marketing, and store manager in Italy – where he and his family planned to stay a while.

Then Ingvar Kamprad phoned, and their plans changed.

”Ingvar is extremely persuasive. When the phone call was over, I had promised to be his assistant, and move back to Sweden in three weeks,” said Mr Agnefjäll, adding that he has ”the world’s best family”, who have followed him in his travels.

After a few years as Mr Kamprad’s assistant, he was promoted to general manager for Sweden. Then he got another phone call, this time from the chairman of the board of IKEA, asking if he wanted to be in charge of the whole group of companies. He did, and in 2013 he assumed the role of president and CEO of the IKEA Group.

Mr Agnefjäll is sometimes asked if he has any advice to students. First of all, he said, you have to realise that everyone is a leader.

”Some people lead themselves, some lead others. Perhaps the biggest challenge is to lead yourself, while having an idea of where you’re going. If you do, chances are good that you’ll end up working with things you enjoy.”

And the second piece of advice? Here he agreed with Ms Baghlanian:

”Listen to your gut feeling and remember to have fun and enjoy yourself along the way.”

Mr Agnefjäll thanked the university and said he is a proud ambassador.

”When we are sent a CV that says Linköping University, I always look at it a bit longer.”