Oskar Henrikson is the psychologist who swam outdoors for an entire year – to see how long it took to establish a habit. In a society where poor mental health is increasing, he wants us to focus on what is healthy. He has been selected as one of Linköping University’s two Alumni of the Year. 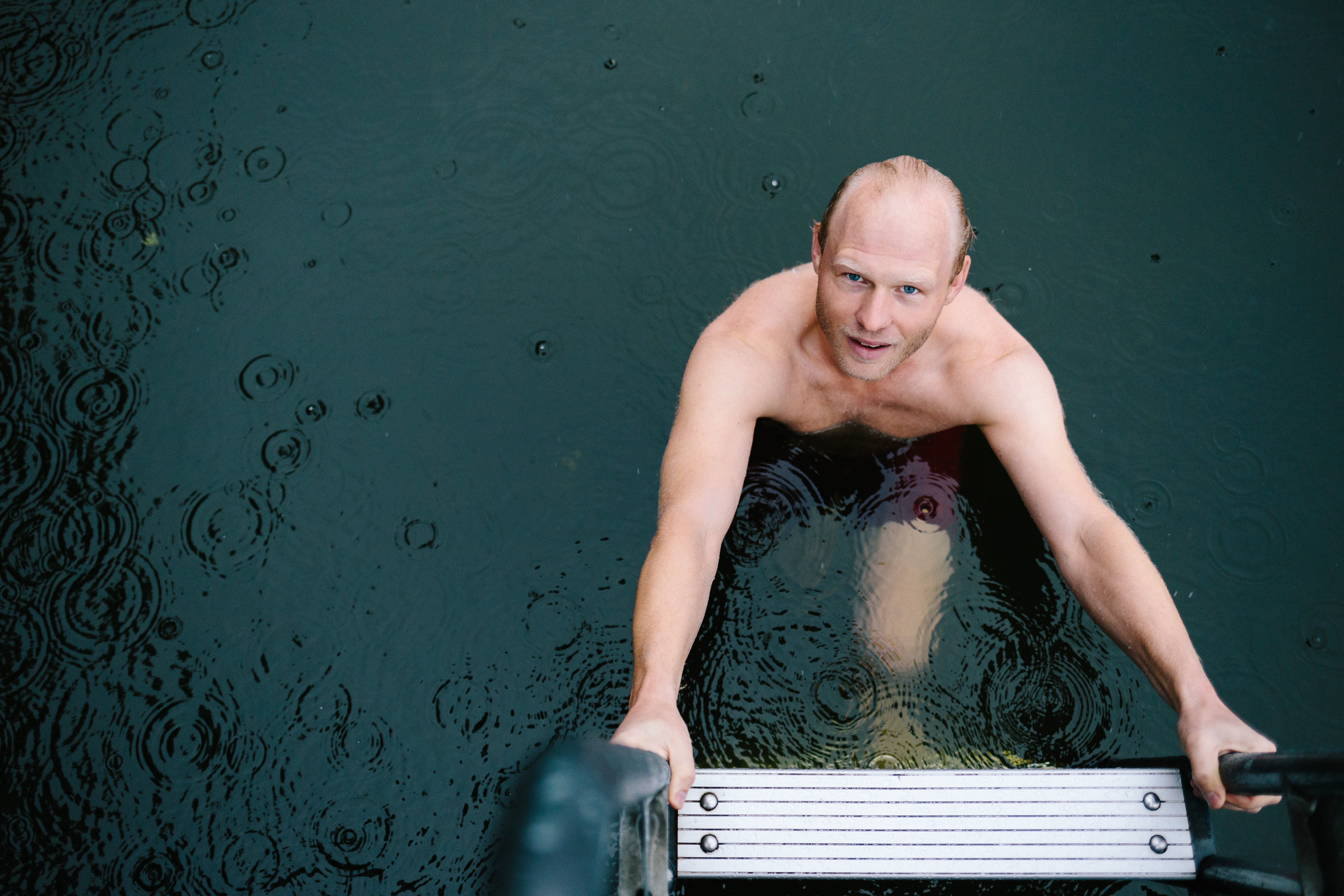 In a turn-of-the-century apartment with 3-metre ceilings in the Old Town of Stockholm, five psychologists are staring reverently at a brown package.
They work at Habitud, and their duties are nothing like those we normally associate with psychologists, i.e. meeting patients at a healthcare centre, corporate health service or hospital. Instead their workday consists of giving talks, blogging and marketing.

Flowing from the sound system is the music of Yann Tiersen – composer of the soundtrack to Amelie – and there is a touch of Montmartre in the room. Heavy ornate furniture, clever details, and that mysterious package.

“It’s like Christmas. Or my birthday – no, everyone’s at the same time!

The package arrived in the post just a few minutes earlier. It contains the brand-new book that the five psychologists have written together. Oskar Henrikson rips it open, takes out a few copies and hands them out.

“Wow! Laminated with gold! Did you know that, Oskar?”

“Silvia isn’t in the photo.” 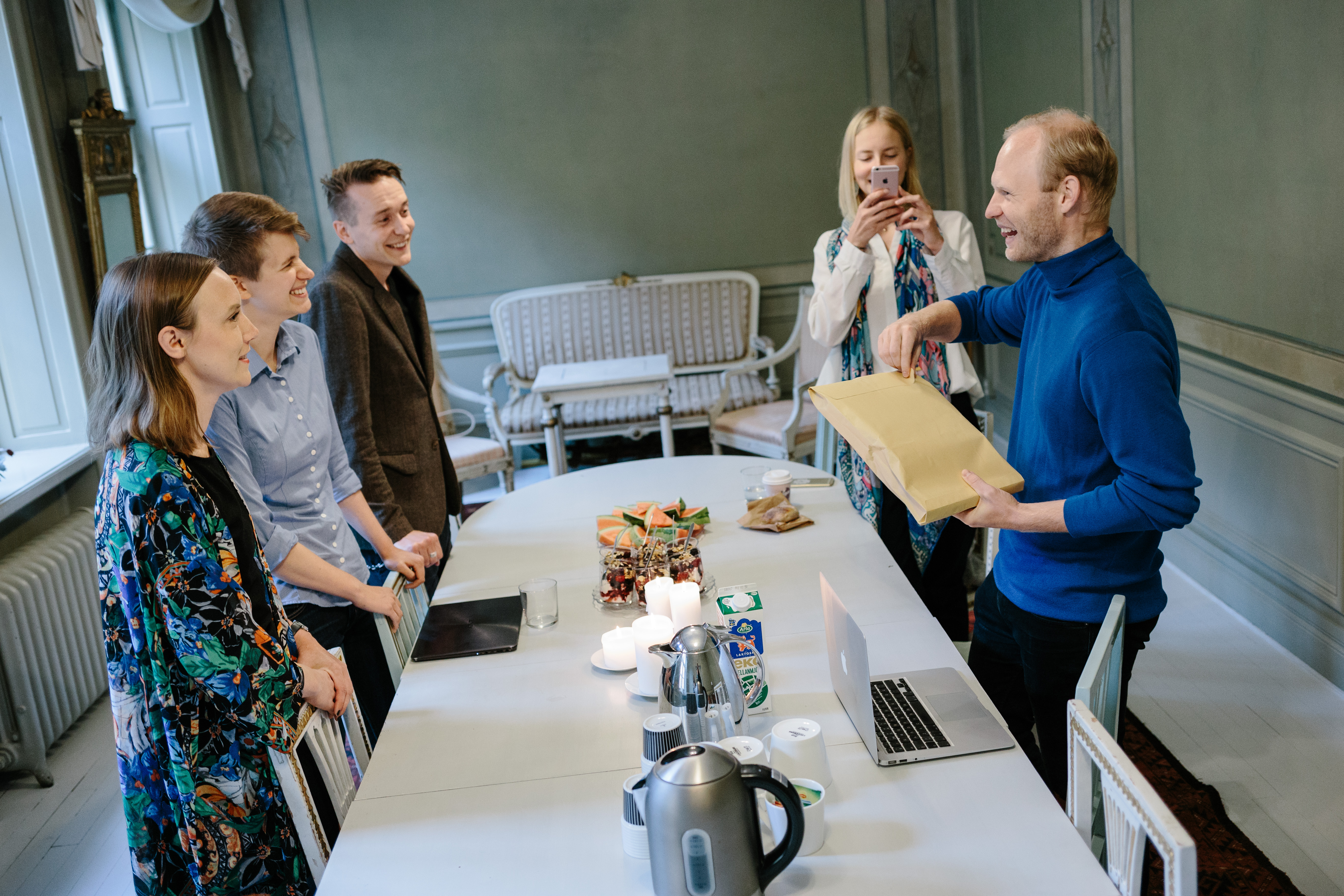 Oskar Henrikson is CEO and founder of Habitud. He started the company because he felt there was a lack of preventive measures for mental ill-health.
Most people contact a psychologist when they’ve already got a problem. For Oskar Henrikson it’s important to strengthen what is healthy, and push out the things that don’t work.

“As for exercise, most people have heard of the health benefits of walking 10,000 steps a day, standing up at your desk for part of the day, and staying active. These things can help prevent poor physical health. But exercising your brain, to avoid poor mental health – not many people know about that,” he says.

For his efforts to improve the health of our souls, and for advancing the psychiatric profession, Oskar Henrikson has been selected as one of Linköping University’s two Alumni of the Year.

Since he was a teenager, Oskar Henrikson has wanted to be a psychologist, and he describes himself as ‘crazily focussed’ in his desire to achieve that. He discovered psychology when his mother retrained as a secondary school teacher, and he got access to her course literature.

“For a lost teenager those books were a godsend, because they put words to my emotions, and explained things I’d experienced. Psychology enables you to understand yourself, others and the world.”

After studying all day, Oskar’s mother longed for company, so when 13-year-old Oskar got home in the afternoon she tested various things on him.

“I decided to become a psychologist, so I could help others to good mental health.”

To find the best psychology programme, Oskar put in a great deal of research. The programme at LiU uses problem-based learning, PBL, where teaching is done in true-to-life situations and the students themselves are primarily responsible for their knowledge acquisition. This convinced him to chose LiU.

To be accepted the requirements included one year’s work experience and an interview. Consequently, for a few years, everything he did was about gaining relevant qualifications. He led a group of young people as they prepared for their confirmation, he did military service and he worked as a teacher for one year.

“When I applied for the programme and they didn’t want to see my CV, I was shocked. Devastated. I had worked so hard for that.”

But he got in.

How to create a new habit

Oskar Henrikson isn’t a psychologist who sits in his chair, waiting for the patients to come to him. He does things his own way, and has always been clear about his goal. He wants to help people feel better mentally, and he wants this to happen before they start to feel really bad.

He believes that having had family members who have suffered from mental ill-health has affected his career choice. But apart from this, what motivates him is what he calls ‘a nerdish passion’ about psychology, habits and behavioural change.

But why the interest in habits?

“45 per cent of what we do is done by routine, so of course, habits are important. And if half of what we do is routine, it’s important that these things are good. I want to get people and organisations to break bad habits and to establish new, better ones.”

Ok, how does one get a good new habit?

“You have to start with a small step. If you want to run, do it once a week. Once it works out well, you can raise the bar.”

Oskar’s company Habitud is built up like a ‘psychological gym’. The website presents research that has been distilled into concrete tips that the visitor can do to exercise their brain, for instance breaking or building up a habit, or taking notice of the positive things around them.

Ice swimming – the toughest part of the day

If you’re trying to get other people to change their lives, shouldn’t you set a good example yourself? Oskar thinks so.

“If people with alcohol problems or eating disorders are able to establish new habits, surely I have to be able to do that as well.”

Checking his diary, he realised he had been swimming quite a bit recently. Could he turn that into a habit?

“It worked – I swam every day for one year. But if I had started in January I probably wouldn’t have managed it. The step would have been too big. But I started in summer, and when it got cold, the habit was already well enough established that I could handle the increase in difficulty.”

Research has shown that when you have built up a habit, your body emits a feel-good substance – even before you start the activity. Your body has learned that a reward is on the way, and you feel a longing. Whether it’s about chocolates, running or an ice-cold swim.

“Swimming is a way of experiencing nature; an exercise in being in the here and now. Lowering yourself into water that’s four degrees Celsius, you don’t think about anything else. Afterwards you get such a kick, and nothing that happens that day will be any tougher. It’s nice to know that.”

He no longer swims every day, but together with some of his co-workers he has started a swimming club. So as tourists and locals stroll through Stockholm’s scenic Old Town they just might catch a glimpse of Oskar and his swimming club, in white bathrobes and slippers, as they shuffle down to the quay.

Instead Oskar has a new challenge: he recently took over Psykologifabriken (the Psychology Factory), a company he founded back in 2009. His plan is to weave it together with Habitud.

Then there’s the gold-laminated book.

“I never actually expected to be an entrepreneur, and even less so an author. But now that I am, I find it really a lot of fun. I hope the people who read the book will feel inspired to change.”

Work: Psychologist with his own company. Public speaker, on topics such as leadership and organisational development.
Hobbies: “Acting – my other great passion. I often have use of my theatre skills when I speak to large groups.”
Happening now: New book, “Ensam eller stark: åtta principer för framgångsrika team”. As new CEO for Psykologifabriken, which he will weave together with Habitud.
Tips for brain gymnastics: “Give someone a compliment, hold a stranger’s hand or think of three things you’re grateful for.”

A day at the office with Oskar Henrikson