In a large number of identical experiments conducted at nine locations worldwide, the ability of people to act unpredictably will be used in an experiment in quantum physics. Linköping University is the Swedish node of the experiment, scheduled for 30 November 2016. 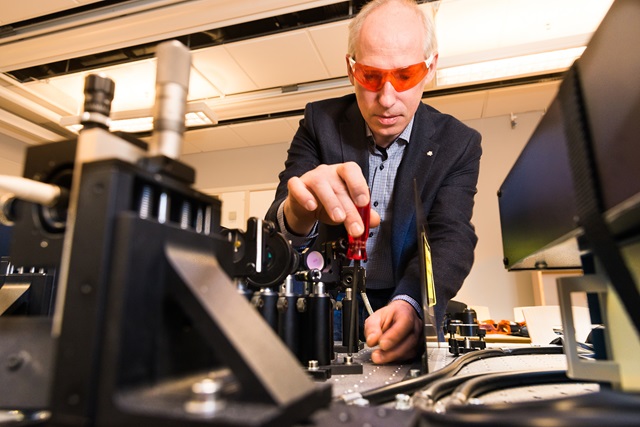 Photo credit: Thor BalkhedWe need everybody’s help. What is required is that you produce, with the aid of a specially designed game on your mobile device, series of ones and zeroes as unpredictably as possible, so that we can together play a trick on Nature.

“Everyone here has a chance to participate in a physics experiment that may answer one of the really big questions: how the microcosmos works,” says Jan Åke Larsson, professor at LiU and in charge of the Swedish node.


A degree of paranoia

The Institute of Photonic Sciences in Spain has taken the initiative to the experiment. Professor Morgan Mitchell of the institute explains why the experiment is so important:

“Some deep mysteries of physics can only be studied by asking unpredictable questions. To simplify slightly: if Nature knows what we are going to ask, it can fool us by giving a predetermined answer. Researchers are normally not paranoid in this way, but some of the predictions of quantum physics are so foreign to our way of thinking that a certain degree of paranoia may be justified. Examples are the idea that small particles can whisper to each other over huge distances, and the idea that objects behave differently when we’re not observing them. The ability of people to take independent decisions is of the greatest importance when we now want to pose unpredictable questions to Nature – no matter how deep the secrets it is trying to keep from us.”

The mobile game can be downloaded from www.thebigbelltest.org.

A short video about the test

The experiment of the century is to be repeated, but this time using people as random number generators and at the same time in many places around the world. It will now be decided once and for all whether Albert Einstein or Niels Bohr was right.