Back to LiU for wedding photos

It was in January 2014 that two students arrived in Linköping as exchange students from two different universities in Singapore. Now in the summer of 2017, they are back to take their ‘pre-wedding photographs’. “We have LiU to thank for bringing us together.” 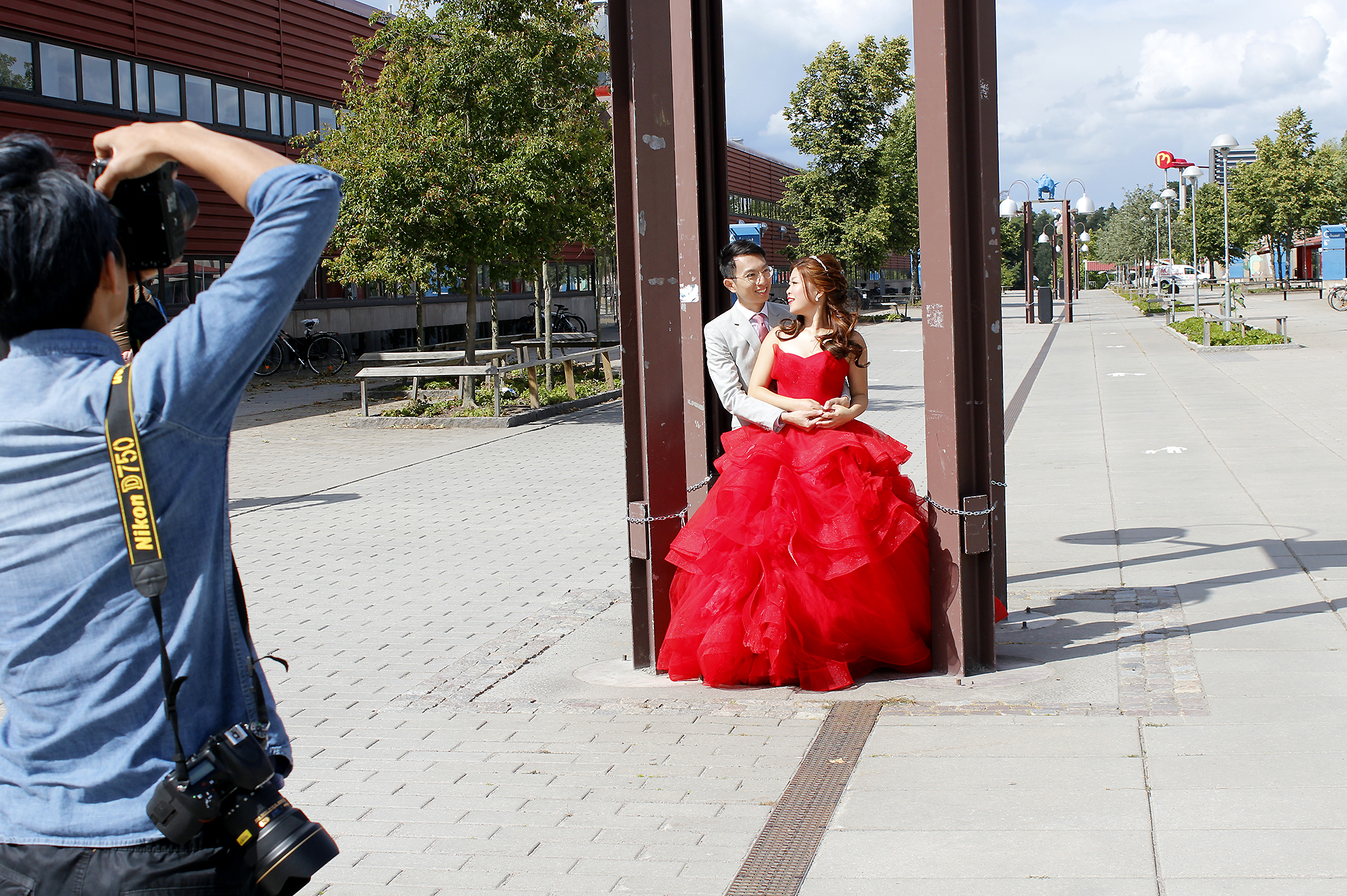 Photo credit: Elisabet WahrbyLui Cheuk Yiu (Charles) and Yong Shunzi (Vanessa) are back at the place where they first met, Linköping University. Together with a photographer and a makeup artist, they have travelled here from Singapore, solely to take their pre-wedding photographs. It’s rather quiet on Campus Valla in the summer, but Vanessa really brings a splash of life as she walks across the lawns in her red wedding dress.
“I think that pre-wedding photography is an Asian tradition,” says Charles, more discretely clad in his grey suit. “And we obviously wanted to take the photographs here, where we met.” 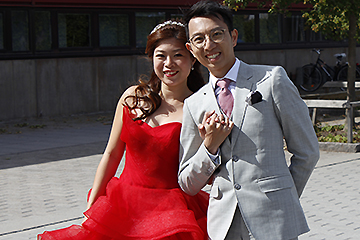 Photo credit: Elisabet WahrbyCharles and Vanessa, together with 30 other exchange students, arrived in Linköping in January 2014 to spend a term here. He was studying engineering, she sociology.
“On one of the first days, the complete group was gathered for an introduction to Linköping and a group photograph,” Charles remembers, but he didn’t pay any attention to Vanessa on that occasion. After this, the group members went their separate ways and spent time with the others on their course.

It wouldn’t be until April that they got to know each other better. They stood together in a queue for tickets for a student party for a whole night. This gave them a lot of time for talking, and it was then that they felt that they vibrated at the same frequency,” as Charles expresses it.
“Singapore is a city full of life, and there’s a lot there to distract you,” says Charles. “Linköping is calmer, more peaceful. You can spend time together here, talk and really get to know each other.”


The most Swedish we can imagine

They visited IKEA on their first date.
“Vanessa needed to buy a few things, so I suggested that we visit IKEA together and eat lunch,” says Charles.
“There was nothing at all special about it,” says Vanessa, “We just had Swedish meatballs. But we love Sweden, and IKEA is the most Swedish we can imagine.”

“But you ignored me for quite a long time, and hardly looked at me,” Vanessa recalls with a smile. “When I saw you I always thought: ‘There’s the guy who just ignores me.’”
“It was tactical,” answers Charles, with a cunning grin. “I wanted to get you interested in me.”

At the end of the term in June, Charles and Vanessa took separate journeys through Europe – he with his friends; she with hers. Charles was in Austria and knew that Vanessa was then in Venice. He made secret plans with her friends to travel to Venice to surprise her.
“It was then that I asked her officially if she would be my girlfriend,” says Charles.

One thing is perfectly obvious – Linköping University and Sweden have a special place in Charles’ and Vanessa’s hearts. They have thought about coming back to take master’s degrees here, but nothing has been decided. The wedding is, in contrast, firmly booked for September next year. It will be a church wedding in the morning with a banquet in the evening.
“That’s when you show the pre-wedding photographs to the wedding guests,” Charles and Vanessa explain.

The bride and groom are being photographed at Campus Valla