"... the distance between students and teachers is short, which is the one thing I like the most about LiU..."

Teachers in the Ecology and Environment department are running a lot of interesting long term projects. Students are very welcome to take part in these projects, either because they are just really interested in the topic, or they want to implement their master’s thesis through them. 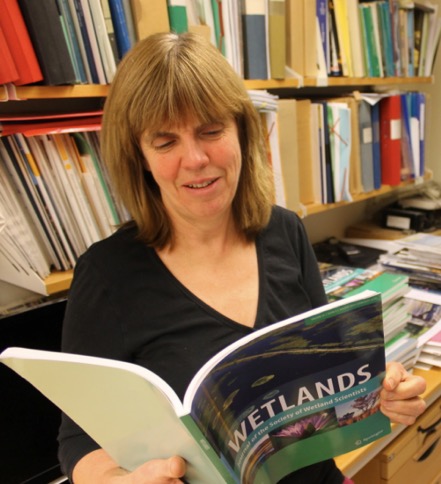 Karin is a wetland specialist who works a lot with partners from other universities. At LiU, Karin teaches in Methods in Ecology in the master’s program, and in some bachelor level courses such as Ecology, Environmental science, Environmental impact assessments and environmental protection.

Currently, she is running a major project called Bonus – Miracle, financed by the European Union and national funding institutes in countries around the Baltic Sea. Karin and her colleagues are trying to find innovative ways to reduce eutrophication while also reducing flood risks and getting other positive effects, such as enhanced biodiversity.

One starting point is the ecosystem services concept. Another project Karin is involved in is one within the Biogas Research Center. The aim is to analyze under which conditions it would be possible to use aquatic biomass from freshwater and marine ecosystems to produce biogas.

Now, since she spends a lot of time working on these projects, Karin misses work with students.

I enjoy having discussions with my students. I love when they question what I say, because through debates I can also learn a lot from them. I like to meet young people with new and fresh ideas.

Even though LiU’s master’s programs have a lot of individual work and projects, she thinks there could be even more of them.

“I like it when students have freedom and when they are encouraged to be creative in what they are doing.”

Karin believes LiU gives students the to think wider and to implement everything they come up with. She emphasizes that the LiU departments have good cooperation and that there is a lot of multidisciplinary work.

“Also, the distance between students and teachers is short, which is the one thing I like the most about LiU and Swedish universities in general. My advice to all students is to get as much from the teachers as possible while they are here."

MIRACLE is a BONUS project focusing on ecosystem services in the Baltic Sea Area, concerning issues like eutrophication, flooding and biodiversity. The project involves modelling, visualization and stakeholder dialogues.