His time at Linköping University opened up new and unexpected paths for Sandeep Jakkampudi. The electronics engineer became an entrepreneur and is today paving the way for Nordic wood products in India. 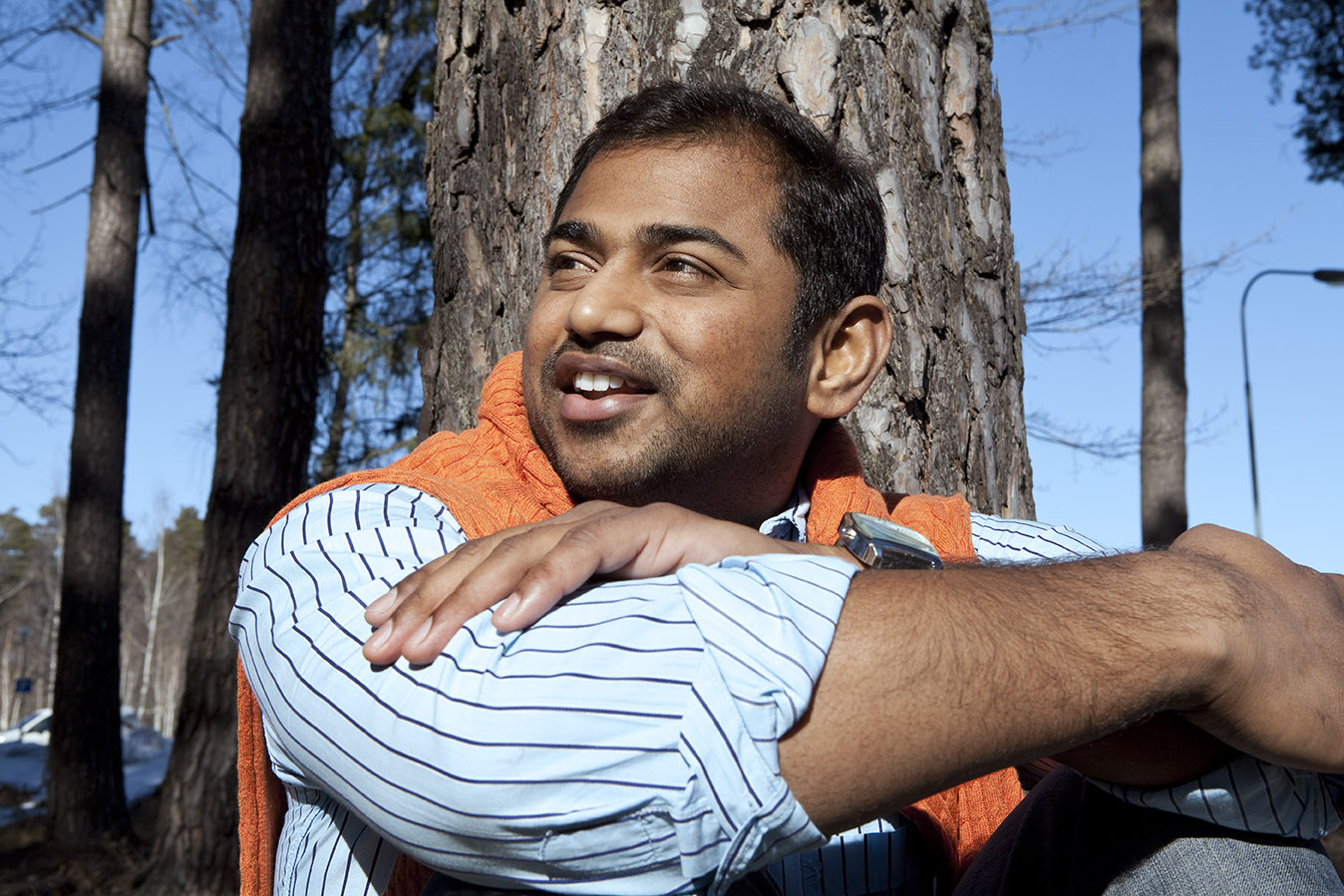 Foto: Vibeke MathiesenHis time at Linköping University opened up new and unexpected paths for Sandeep Jakkampudi. The electronics engineer became an entrepreneur and is today paving the way for Nordic wood products in India.

The Colloseum, one of the central meeting places at Linköping University, is full of life. Students pass by, talking and laughing, on the way to a lecture or perhaps just out into the sun. Some remain in the cafeteria for a moment’s chat over a Swedish fika.

Sandeep Jakkampudi smiles as he looks around. He is back at Linköping University for a short while. It was here he studied for his master’s, and it was here he was president of the international students’ organisation. And it was here his life changed.

Jakkampudi came to Linköping University in 2009. He was an electronics engineer from southwest India, and was going tobuild on that with study in the System on a Chip master’s programme. But his time in Linköping got him to rethink that plan.

“Linköping University gave me a chance to see what I really wanted to do and the freedom to empower my skills. Here I experienced the importance of innovation and entrepreneurship,” he says.

He switched to a master’s programme focusing on innovation and product development.

Alongside his studies, his year as president of the International Student Association (ISA) involved a great many useful lessons.

“It was a challenge to build a functioning organisation, with good teamwork and the ability to develop new activities. Concretely, I got to learn what innovation means,” Jakkampudi tells us.

Several new initiatives were taken during his year as the head of ISA.
“We introduced the Student Pickup Service, meeting newly-arrived international students at the train. We arranged a sports week with various sports. We arranged trips, fashion shows, and a parade and street dance in central Linköping that got a lot of attention.”

ISA also expanded i-Day, the international cultural day, to two days where people could acquaint themselves with dishes and cultural efforts from all the corners of the globe.
“I was really happy with the ISA team. It was a fantastic experience to work together with people from South America, China, Norway, Lithuania and Germany.”

"I learned so much in Sweden"

He has never regretted crossing the globe to study at Linköping University.
“I’ve learned so much in Sweden, about everything from how to act in traffic to how to deal with your garbage so that it can be recycled. And through my Swedish host family I learned about Swedish culture, like candlemaking and celebrating Christmas.”

At one point, Jakkampudi thought about investing in tourism after his studies. The plan was to get more people from India to visit Europe. Over one summer he drove around with several friends and visited many of Europe’s major cities.
“The Grand European Tour,” he says, laughing.

But something else grabbed his interest. On the way to the renowned ice hotel in Jukkasjärvi in northernmost Sweden, Jakkampudi discovered the Swedish forests in earnest.
“They were endless, and stretched for miles and miles.”

He started reading and learning more about it, and noticed that Sweden had a resource here for which there was great need in India.
“In India, 95% of all wood products are imported. Previously, a lot came from the rain forests in Asia and South America. Today Canada and Europe have taken over as suppliers. So far, however, there isn’t a lot coming from Scandinavia.”

“A number of Swedish wood product businesses have tried to get into the Indian market, but without success. Language has been a problem, as has a lack of transparency, information and networks.”

Jakkampudi contacted the Swedish forestry company, who were interested in letting him carry out market research in India for them as his master’s thesis. But the company began experiencing financial problems and was forced to withdraw. Jakkampudi, however, held onto his plan.
“And the day before I left, the Norwegian forestry company Moelven got in touch and said they were ready to sponsor me!”

For three months he criss-crossed India, interviewing people engaged in various industries connected with wood products.
“It provided a fantastic opportunity to visit places in India I’d never been to before. In total, I conducted 120 interviews. Many, of course, wondered what kind of student I was, asking strange questions. A number of them thought I came from customs or the tax agency...”

His results after the trip are unambiguous.
“There is a constant requirement in many different wood sections, such as packing, construction and joinery. With IKEA coming to India in a near future I expect there will be a huge boom in demand for joinery.”

The lessons have not only ended up in his master’s thesis, but have also provided a good foundation to stand on for the new company, Woodpie, that he started up during the year.
“I’ll help with the contacts between Scandinavia and India, between the sellers and purchasers of wood products.”

Just a week after we meet, he will be on his way to India with Moelven to meet purchasers.
“This is just the beginning. In ten years, maybe I’ll have started a company that makes furniture for IKEA in India,” Jakkampudi says, smiling.