Localization and Monitoring of Vehicles supported by Inertial Sensors

The goal is to develop fundamental nonlinear filtering and estimation methods with applications to speed estimation in wheel based vehicles. 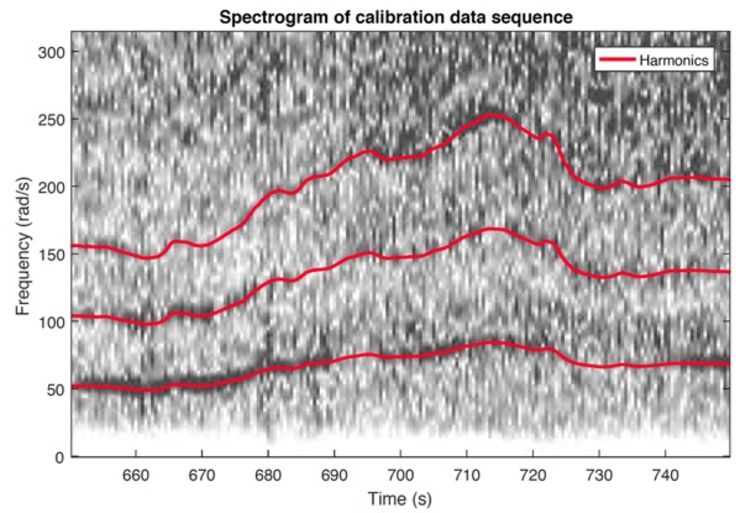 Illustration of a spectrogram (time-varying frequency content) computed from a vehicle mounted  accelerometer, compared to the estimated harmonics.The manufacturing industry always look for opportunities to replace costly and sensitive sensors with cheaper and more robust ones. The wheel speed sensor is one such sensor that is exposed to harsh environment and is a relatively costly part of vehicles. In some applications, a contact-less accelerometer can be used instead.

By analyzing the time-varying spectrum of the vibrations caused by the wheel, the wheel speed can be computed. Another potential application is to support IoT devices where speed information is needed when located on a vehicle. Here, wired solutions to the existing sensors can be excluded. Speed estimation in cellphones is one further application.

This project has developed algorithms tailored to this problem that extend current theory in nonlinear filtering.

The goal of this project is to develop autonomous functions for the joint problem of sensor management and aircraft control to relieve a human system operator. This will be achieved by exploring high level control of the platforms and resources.

The time update is a critical component in navigation and tracking filters. In this project, we aim to use data-driven methods and machine learning to learn the dynamics of the vehicle.

The goal is to obtain a map of the radio environment in distributed radio systems, and use this map for localization.

This project aims to develop enabling technologies that allow for human-robot cohabitation in mines. That is, to facilitate safe and efficient interaction between humans, autonomous systems, and manual machinery.