Maestro of the signals

Distinguished professor, senior coordinator, director,
innovator, entrepreneur, rhinoceros saviour, ideas man: Fredrik
Gustafsson has a lot to put on his business card. Now he is chasing both poachers and space junk.
Fredrik Gustafsson is a professor whose area of research, sensor informatics, has ended up right in the epicentre of technological development. The subject is relatively new to science and covers a multitude of very concrete applications – everything from the possibility of saving rhinos in Kenya and keeping track of space junk to tyre pressure gauges and smart guitar amplifiers. The possibilities are endless. 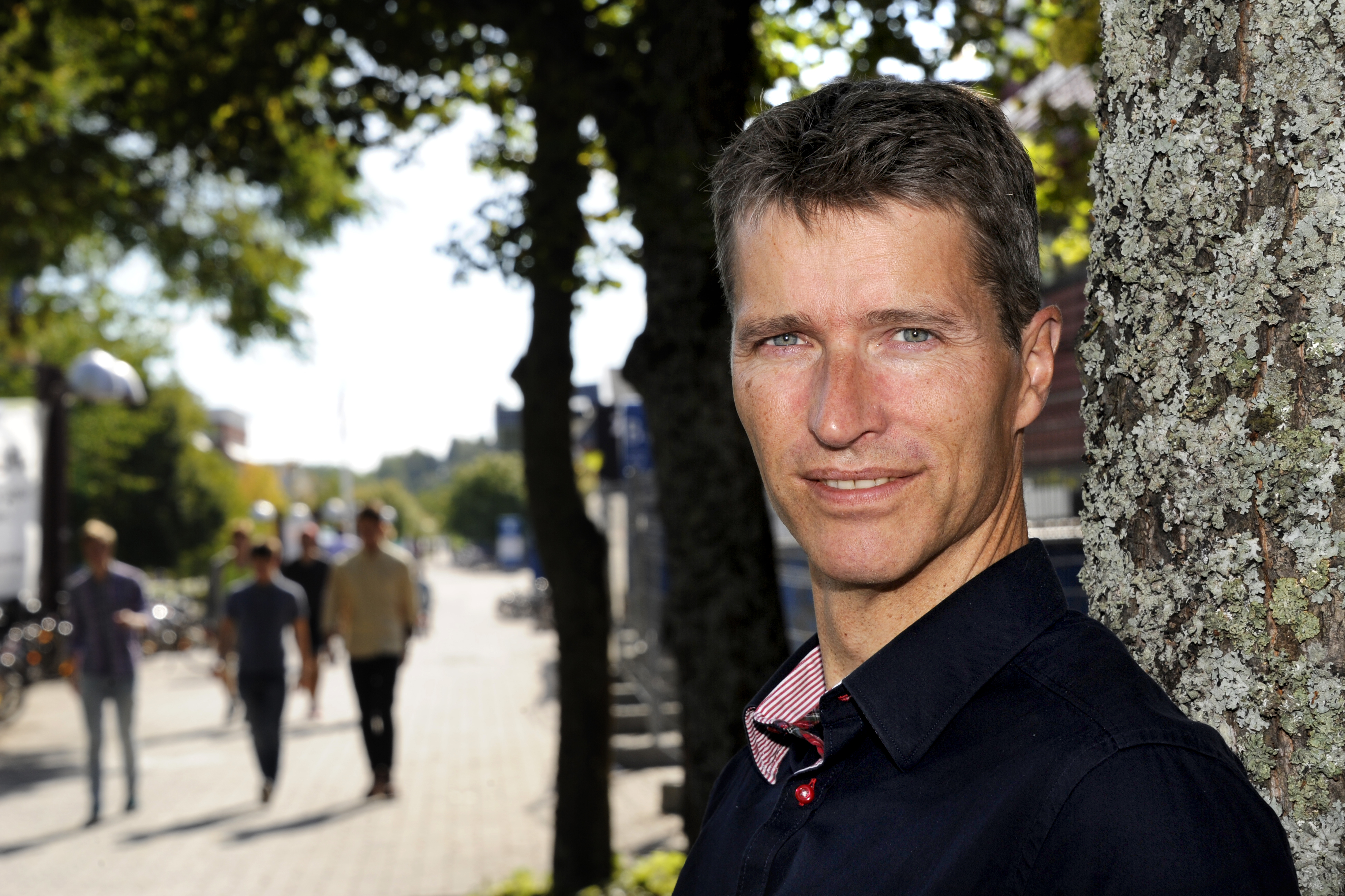 Foto: Göran Billeson
There are sensors everywhere around us and there will surely be more. Sensor informatics can collect signals from different types of sensors – cameras, pressure gauges, temperature gauges, gyros, radar and others. With the aid of mathematical models, this content is converted into useful, comprehensible information.

Ending the hunt of the endangered rhino is one of the projects Professor Gustafson is running as part of the Vinnova-financed Security Link. The same basic technology can actually be used in Kenya and to improve perimeter security at nuclear power plants and ports.

“The rhino project in Ngulia fits in well here; it’s all about exploiting existing technology and smartphones in a new way,” he explains.

Starting this September, the reserve’s wardens will be able to use Swedish technology to stop the poaching of rhinos where only the horns are taken, ground down and sold in China as a panacea for various health complaints. The project is being run in conjunction with the American think-tank Stimson, the Kenyan authorities and a number of other organisations, and a great deal of the development input for this project is being done locally in the iHUB innovation network in Nairobi.

“They interview the wardens and go with them onto the reserve; they check the interfaces and so on. It is important the technology is not perceived as alien by those who will use it,” Professor Gustafsson says.

Mobile phones and other sensors placed out on the reserve will keep track of the movements of both the animals and intruding poachers. Heat-sensing cameras also watch in the night; with the aid of carefully-placed mobile telephones that also detect shots, the poachers can rapidly be located. In the next phase, unmanned aircraft could also be used.

At LiU’s Department of Electrical Engineering, research is also taking place with the aim of finding smarter algorithms that can carry out positioning in real time without the batteries in the equipment running out.

A side effect of this is that visiting Kolmården Wildlife Park will be even more fun, as a testing ground is currently being set up in the savannah area.

“We can show what’s happening to the wild animals on the savannah. It’s good for Kolmården and their visitors, and good for us,” says Professor Gustafsson, who is also looking forward to this autumn’s trip to Kenya to see an initial version of the system in operation.

His other larger project is something completely different. One possible application of the theoretical results is keeping track of the approximately 200,000 flying objects – known as space junk – circling the earth. They pose a potentially great danger to both the International Space Station and future space travellers, something that Swedish Research Council judges deemed so pressing that he was chosen as one of this year’s distinguished professors.

A distinguished professor receives SEK 50 million over ten years; of the nine successful candidates this year, Professor Gustafsson is the only one in the field of technology research. Research in this project touches on the Kalman filter – an algorithm that, out of a large number of fairly bad signals, can still for example judge the distance and speed of moving systems.

“The Kalman filter has been standard within control and guidance systems since the 1960s, and was used early on for such things as guiding rockets that were to land on the moon; the distance is measured and the rocket decelerates at the right speed,” he explains.

But for this it is necessary to take in perhaps 100 or 1,000 different parameters. In the case of space junk, there are hundreds of thousands of bits and pieces of different sizes and shapes whizzing round. But by using new and efficient methods of calculation, Professor Gustafsson is hoping to make the problem more manageable.

“I have sketched out a solution and both PhD students and postdocs have set to work. Along with the distinguished professorship money comes a great deal of trust; there is no requirement for annual evaluations,” says Professor Gustafsson.

But apart from that, case evaluations are a big part of his daily life at the moment. Three different large-scale projects need a midterm analysis: reports need to be submitted about Cadics, (the Linnaeus Centre within IT) where he is senior coordinator, ELLIIT (ICT collaboration between LiU, BTH in Blekinge, Halmstad University and Lund University) in which he is participating, and Security Link (security research within FOI, KTH, Chalmers, LiU and a number of companies) where he is a head of project.

“But writing reports is still quite creative; it gives you energy seeing the visions and that leads to new ideas.”

About: Leads a sensor informatics research group of over 20 people, more than half of whom are PhD students. Founded a number of companies, including Nira Dynamics (tyre pressure measurement), Softube (guitar amplifiers) SenionLab (smart indoor navigation solutions). Has or shares around thirty patents. Is one of LiU’s most cited researchers.