The Syrian writer Housam Al-Mosilli recently spoke at Linköping University’s Valla Library about life in Syria, the escape that brought him to Linköping and freedom of expression. 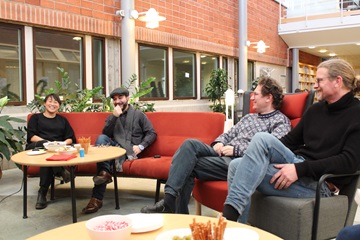 Photo credit: Maria KarlbergThe Syrian writer Housam Al-Mosilli recently spoke at Linköping University’s Valla Library about life in Syria, the escape that brought him to Linköping and freedom of expression.

Housam Al-Mosilli began by reading from his essay on his first encounter with Sweden. He likens the Swedes to sunflowers, drawn to the light and the warmth. He read in Arabic, and Senior Librarian Anneli Friberg translated.

“It’s lucky I can speak English, and know enough about football. This means I can speak to most Swedes without difficulty, and make contact right away.”

The audience, consisting mainly of university staff members, chuckled when he described his difficulties with Swedish recycling.

The humour later gave way to a serious, attentive silence when he started to tell about his life. In Syria he worked as a poet and journalist, however this became increasingly dangerous, and he fled in 2012. By then he had repeatedly been imprisoned and tortured, because he had reported on the abuses of the Assad regime.

He took “the regular route” via Lebanon and Egypt to Turkey. In Istanbul he lived and worked for two and a half years, but it was dangerous there too. His friend, the journalist Naji al-Jarf, was murdered just before he was to flee from Turkey to France.

Housam Al-Mosilli was told about the opportunity to apply for a writer’s residency through an organisation called ICORN (International Cities Of Refuge Network). ICORN and Linköping Municipality selected Housam as the town’s first ICORN writer in residence. Since 25 February he has lived and worked in Linköping.

“My first impression was very welcoming. I had only been here a week when a man stopped me in the street and said welcome, I read your text in a national newspaper and really liked it.” 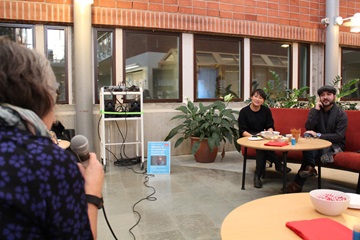 Photo credit: Maria KarlbergHe is grateful that he was able to come to Sweden and Linköping. But he adds that freedom of expression must be defended here as well:
“I have read that every third writer and artist in Sweden has been threatened at some point.”

When asked what ordinary people can do to promote freedom of expression, he responded:
“The simplest way is to keep on expressing yourselves. Don’t censure yourselves.”

"Sexual violence is surrounded by wordlessness"

Putting words to one’s experience of violence is a first step in being able to move on in life, explains Cecilia Bödker Pedersen, one of LiU’s Alumni of the Year. She is secretary general of an organisation for people subjected to sexual violence.

Knowledge about climate change is not enough to stop global warming. One of the LiU Alumni of the Year is Martin Hultman. He leads the world’s first researcher network for the study of climate change denialism.

Alumni of the year: climate denialism and sexual abuse

Cecilia Bödker Pedersen, general secretary of Storasyster, campaigns for a society free from sexual violence. Martin Hultman, docent at Chalmers, conducts research into why we do not act more forcefully against climate change.

A Swedish study has shown that the alpha variant of SARS-CoV-2 is associated with more severe Covid-19 disease, and leads to more hospital admissions than previous variants.

Can a universal basic income be an alternate to benefits for people who have been long unemployed? A new report from Linköping University has examined for official bodies in Östergötland whether such a solution is worth testing.

A new student accommodation project is literally blossoming on Campus Valla, Linköping. It includes the first wall of plants on a multi-family building in Sweden, with well-designed apartments, and social areas for both study and relaxation.

LiU researchers have used high-throughput electrophysiology experiments with a borrowed machine to see how ion channels in cells are influenced by drugs. A new collaboration with the biotech industry.

Humour that makes you think – cat research at LiU

Linguist Robert Eklund shares an Ig Nobel Prize with two other researchers for their work on how cats communicate with humans in different ways. The alternative Nobel Prizes are awarded to research that makes people laugh and then think.

LiU’s reputation stronger than ever

Sifo Kantar Public has published its index that measures the reputations of Swedish institutions of higher education. It shows that Linköping University has had the greatest increase in reputation among the general public.

Many species will become extinct as a consequence of global warming. This is the prediction of a mathematical model developed at LiU. The simulations show that climate change will have a particularly large impact on ecosystems in polar regions.

New method for consultations with young people on sexual ill-health

A procedure that uses written questions to identify visitors to youth clinics who have experienced or risk experiencing sexual ill-health is receiving high praise from personnel and visitors. This is the conclusion of a doctoral thesis from LiU.

Academic freedom cannot be taken for granted. Linköping University joined the international network Scholars at Risk in June 2021. This network helps scholars who cannot work due to such factors as threats and persecution.

Linköping University has made rapid progress upwards in global rankings. A newly published global list has LiU in place 283 – more than 100 places higher than in the list published last year.

Differences in long-distance trade can have significant effects on genetic diversity in agriculture. A study of 120-year-old seed samples from Jämtland shows that unique local varieties can develop when seed exchange instead takes place locally.

LiU student Albin Hansson (20) is competing this autumn in Lego Masters on TV4. His goal after completing his engineering master’s degree specialising in design and product development is to become a Lego designer.

A new study has shown that the tumour-inhibiting gene TET2 is silenced in a large fraction of cases of acute lymphoblastic leukemia (ALL) in children. The scientists show that the gene can be reactivated by an existing drug.