Is it right to pay compensation for international atrocities committed a long time ago? Do subsequent generations have a duty towards those people and nations who suffered? These questions are discussed in a new book by Göran Collste, professor of Applied Ethics. 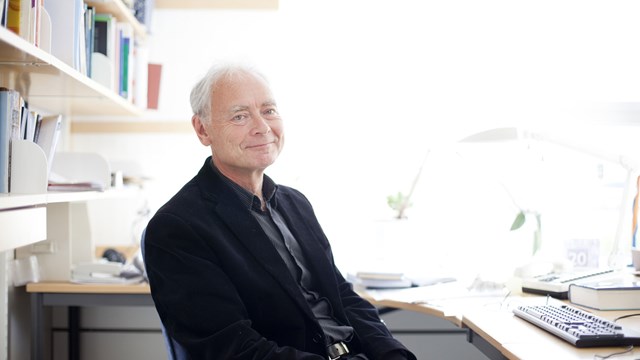 For a number of years he has been looking deep into these issues with the aid of research grants from the Swedish Research Council.
“Global justice has been discussed for a long time, but I have felt a lack of a historical perspective in the debate,” says Professor Collste.
The research resulted in his newly-published book, Global Rectificatory Justice.

The overarching questions in the book are if and how it is possible to rectify – that is, put things right and compensate for – previous colonial atrocities.
Photo of German colonialist“I also highlight how the current global order reflects colonial structures, for example such as domination and subordination, power, welfare and poverty. What are the consequences of this for our responsibilities today?”

One of many examples of colonialism’s dark history is the genocide of the Herero and Namaqua peoples by the Germans in Namibia in the early 1900s. Before the German atrocities, they numbered 80,000. Most of them were killed or driven out into the desert to die there. After three years there were 16,000 left.
Image of map of parts of AfricaAnother example is Great Britain’s colonial war against the Kenyan Mau Mau movement in the 1950s, when hundreds of thousands of Kenyans were placed in concentration camps under very harsh conditions.

“Interestingly enough the British government admitted this atrocity last year, asked for forgiveness, and paid financial compensation to Kenyans who were imprisoned in the 1950s.”
Yet another example is the demand by the Caribbean heads of state for rectification from the countries that took part in the slave trade in the 1700s, including Sweden.
“They said that slavery contributed to economic development in Europe while consolidating poverty in the Caribbean.”
Can people who are alive now, in 2015, be held responsible for what their ancestors did?
It is a difficult question, according to the professor of ethics.

“It might seem unreasonable to hold someone responsible for another person’s actions that took place long ago. But if our lives benefit from what happened then, if we are enjoying the fruits of an injustice that was committed many years ago, while others still suffer from it – well, in that case, it is not unreasonable to maintain that we have a moral obligation, even today,” is Professor Collste’s answer.
What are the implications of rectification for historical acts of violence such as slave trading, the Holocaust, and other acts of genocide and atrocities?
Professor Collste discusses this in his book and highlights three fundamental conditions for victims and their descendants to feel that they have received justice. The first condition is that the countries that committed the atrocities acknowledge the historical fact.

“That is perhaps the most important of all, that the suffering of the victim is acknowledged by the perpetrator.”
Condition number two is that the countries – and individuals, if they are still alive – ask for forgiveness.
And the third condition is that the victims or their descendants should if possible receive compensation for what happened.
“With regard to rectification following colonialism this is less a case of financial compensation, but rather breaking the patterns that colonialism gave rise to. Like, for example, establishing new equitable relations between the colonial powers and their former colonies.”

The book is being published in a time of exceptional turbulence around the world. What does Professor Collste hope to accomplish with it?
He has no expectation that it will change the world, but rather that it will be an addition to ethics research.
“The book’s contribution is above all that it gives a new outlook on the issue of global justice. And perhaps ethics research, as with other research, can in turn influence political decision-makers.”