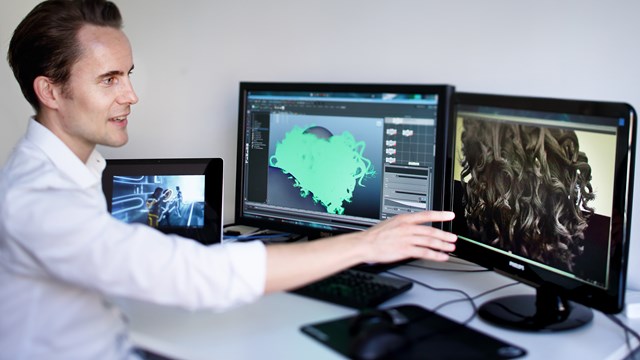 In his office in the Ironing Board Building in Norrköping’s old industrial precinct, Mattias Bergbom is back where it all began, at Linköping University and the Media Technology and Engineering programme.

These days he’s a consultant, working remotely for Digital Domain, a company that creates visual effects for major Hollywood productions. Previously he spent four years in Los Angeles. Initially his job was to develop the software used to create the special effects. Later on he got to use the software he had developed himself.

“This job is mainly technical, not artistic,” he explains. “But students of the Media Technology and Engineering programme have an eye for what looks good. We see the big picture, and can communicate with creatives and artists. The tech field is a great way to get into the industry through the back door, by showing that you can also work creatively.”

The first film Mattias worked on was “The Curious Case of Benjamin Button”, starring Brad Pitt, about a man who ages backwards. Mattias’s job was to make sure that Pitt’s hair looked natural, as he gradually grew younger.

Apparently Mattias succeeded. The film won an Oscar for Visual Effects in 2008.

“We were a team of about a hundred working on the special effects. I didn’t get to attend the Oscars, meet the celebrities, stroll down the red carpet or receive the statue. All that stuff is high-level politics. But at least I’ve held the Oscar.”

“Benjamin Button” was a breakthrough for Mattias Bergbom, in more ways than one. It enabled him to create his own niche in the special effects industry. Hollywood is full of people who do explosion, smoke, fire and running water. But no one did hair.

“My magnum opus was Tron: Legacy, where I was in charge of all digital hair. For instance they needed a young version of the male lead, Jeff Bridges.”

Mattias also did the hair for the American version of “The Girl with the Dragon Tattoo”, for instance for a scene where Lisbeth Salander is riding a motorcycle. Because it was shot in Sweden, she had to wear a helmet. For the film Mattias replaced the helmet with hair that blows in the wind.

“Digital Domain has continued to use my hair system, which means I’ve made myself indispensable in the hair department. Now I’m developing the system for the long term – a version 2.0. From Norrköping I’m leading a team that will make the system cheaper, better and more efficient.”

Hollywood is a dream for people all over the world, and for most it remains a dream. Mattias wasn’t even thinking of Hollywood; he would have been happy with any IT job in the Norrköping area. His route to Hollywood went via a student exchange at Stanford University and a graduation project at Digital Domain.

“On my second to last day they asked me to continue working there. It had been a nervous wait, and I was extremely relieved.”

Mattias spent four years in Hollywood. During that time he met Elin, now his wife, so there was a lot of commuting between Norrköping and Los Angeles.

“You live a sort of semi-existence, in a rented apartment, with no long-term plans. The work is fantastic and the lifestyle is great when you’re 28, white, healthy and have a lifeline back to Sweden. But it was difficult to envisage a secure future there. We thought for a long time about what we should do – apply for a green card in the States or commit 100% to Sweden.”

Sweden won. Now the family lives in Norrköping. Mattias runs his own company, and apart from consulting for Digital Domain, he does some smaller jobs for Swedish clients, including Visualization Center C at Linköping University’s Norrköping Campus.

“I’m really grateful – for my year at Stanford, for the job in Hollywood. Sometimes I miss the action, being so close to the Pacific Ocean, and, surprisingly, the countryside there. But I’m happy to be without the traffic and the differences between rich and poor. It’s a great place to visit, but I don’t feel like moving back.”