More knowledge exchange is good for everyone

The advance of globalisation has led to new collaborations between academia and the business sector that are based on knowledge exchange and innovation development. But success across an entire market requires a lot of leverage – like the Gripen fighter plane deal in the collaboration between Saab and Linköping University (LiU) in Brazil. 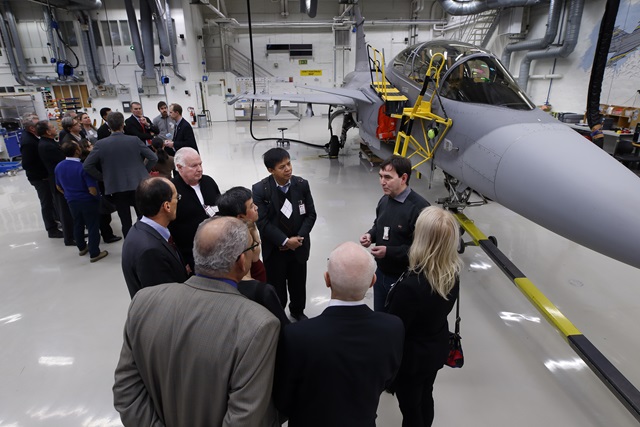 Studiebesök Saab.Since 2015, six Swedish universities (Chalmers, KTH Royal Institute of Technology, Lund, Uppsala, Stockholm and Linköping), with funding from the Swedish Foundation for International Cooperation in Research and Higher Education, STINT, have joined forces with the aim of advancing collaboration and partnership in South Korea, Singapore, China, Indonesia and Brazil. The project, called the Swedish Academic Collaboration Forum, has facilitated knowledge transfer at conferences and seminars in the various countries. The final seminar took place recently in Stockholm, and was attended by Helene Hellmark Knutsson, the Swedish Minister for Higher Education and Research. However when the topic moved to industrial collaboration, the seminar participants travelled to Linköping for a visit to Linköping University and Saab.

“Of the project countries, Brazil is probably Sweden’s strongest collaborative partner, thanks to the Gripen fighter plane deal, and in this context it’s interesting to show how Saab and LiU work together,” says André Bittencourt, LiU’s coordinator for activities relating to the collaboration with Brazil. He believes that, despite the different situations in the various participant countries, they all face common challenges, and that the networking itself is important. Professor Paulo Afonso Burmann from Brazil’s Federal University of Santa Maria agrees:

“Most important are the contacts between the universities in Sweden and Brazil, and between the various Brazilian universities. It’s the latter that lead to the actual work, such as organising student and teacher exchanges.”

Many of the questions from the participants, who came mainly from universities, regarded financing, e.g. “How much money do businesses invest, to collaborate with Linköping University?” LiU business coordinator Maria Swartz couldn’t – and didn’t want to – give an exact answer to that question. “We see collaboration in a broader perspective, with benefits such as open knowledge transfer between academia and the business sector, but there are also benefits to society.”

It’s no secret that LiU and Saab have had very strong links over the years. Three years ago a strategic partnership started, aimed at further advancing collaboration. Results include more student and researcher exchanges in Brazil, in conjunction with the large Gripen deal.

One person who has closely followed the development of the collaboration between Sweden and Brazil is Mikael Román, counsellor at the Embassy of Sweden in Brasilia and formerly associate professor at Linköping University:

“Obviously the Gripen deal provides the leverage for the continued advancement of the collaboration between the countries. It’s a massive, long-term deal, and in coming years additional deals will be added to the mix. It’s simply an ideal foundation from which we can take some risks together, without worrying too much about short-term mistakes, and for Linköping University I expect that the knowledge transfer aspect will be absolutely central.”

“An important part of this work is to create dynamic, open-minded environments where people can make new connections. My experience is that Brazilians are good at socialising. Just give them a few rooms and computers on campus and in no time they’ll be meeting new people and creating new opportunities,” says Mikael Román.