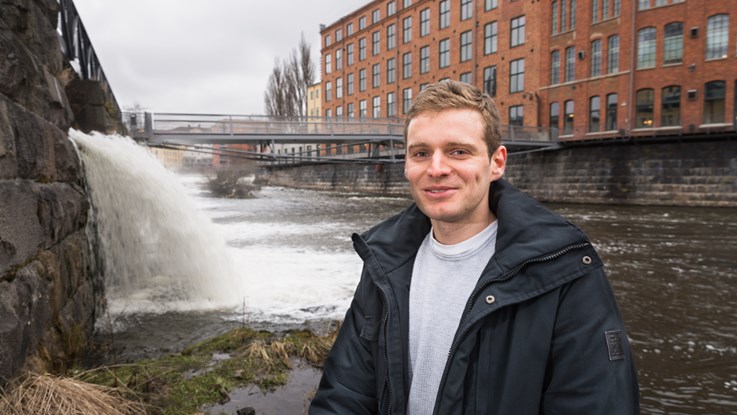 Mihai Aldén is the main attraction, and closing speaker, at the Media Technology Days on Campus Norrköping, where he graduated with an MSc in 2011. After his graduation project at DreamWorks Animation, he became one of the developers of the company’s tool for advanced effects in animated films.

The tool, or framework, is called OpenVDB and is open and free.

“It has been used one way or another in every major animated film production over the last few years, including those of DreamWorks' competitor Disney,” Aldén explains.

“One of their artists contacted me informally about how our tool could be used to break ice in the film Frozen.”

The film team’s artists/illustrators first build up scenes with figures and images. Then, inn OpenVDB, credible movements are created for water, cloud, fire, smoke, explosions and such.

“OpenVDB can store and manipulate huge volumes of data, and we have a large collection of tools for different kinds of effects. The framework makes it possible to work with the very high resolution 3D volumes needed for today’s effect-filled films.”

An animated feature film takes approximately five years to produce, two of which are devoted to special effects.

“It’s important for the tools to be fast, since the artists need to create many different versions of each effect so as to find the right style.”

The landscape of Campus Norrköping is dominated by the real-life Motala River.

How long would it take to animate the waterfall?

“We could simulate it in a few hours, but in animated films an artist will work for several months on an effect. They generate a lot of different versions of the same effect so as to find a style that matches the film well.”

How does it feel to come back to LiU?

“It’s nice to meet the current students and other alumni and see how much media technology education had grown since I graduated.”

In the Kåkenhus Building there is a reverent hush during the talk, interrupted by sudden outbursts when Aldén shows his effects: disasters, deluges and terrible monsters that loom up.

“There are Media Technology alumni working in all the big special effects houses all over the world, including London, Vancouver, Los Angeles and Wellington in New Zealand, where Lord of the Rings was made.”

Mr Aldén chose his own path in his studies.

“I got more and more interested in simulation and visualisation during the last years of the programme. It became a hobby that took up a lot of time, and I guess I neglected a lot of other courses and a lot of social life...”

“My advice is to choose courses that are arranged as projects, not normal courses with a fixed plan. You learn more by working independently and looking for the answers to a bigger problem.”

Mr Aldén sought a graduation project through Ken Museth, a former professor at LiU who had started working at DreamWorks.

“The truth is I missed most of the course and focussed on one thing – the technology that is now a part of OpenVDB,” he says with a somewhat wry smile.

The award of a technical Oscar, or a Technical Achievement Award, from the Academy of Motion Picture Arts and Sciences begins by companies submitting suggestions that are examined rigorously by experts in film special effects.

“We were interviewed in the autumn and then we didn't hear anything. I’d almost forgotten about the whole thing until the beginning of January when I found a letter in the post with the Oscar logo. It felt unreal and it took a few days before it sank in that it was true and I dared to tell anyone.”

“The greatest reward is that the framework has become so widespread and that many companies find it useful. It’s fantastic to have other people using our tool.”

Footnote: Mihai Aldén was awarded a technical Oscar for OpenVDB in 2015 together with former LiU professor Ken Museth and Peter Cucka. At the same time Magnus Wrenninge, also a former media technology student at LiU, was awarded a similar prize for Field3D, a library of computer graphics for animated films.