Dare to start your own company. That was Prince Daniel’s challenge when he lectured to students on Campus Norrköping. The great majority of students attending could imagine doing so. 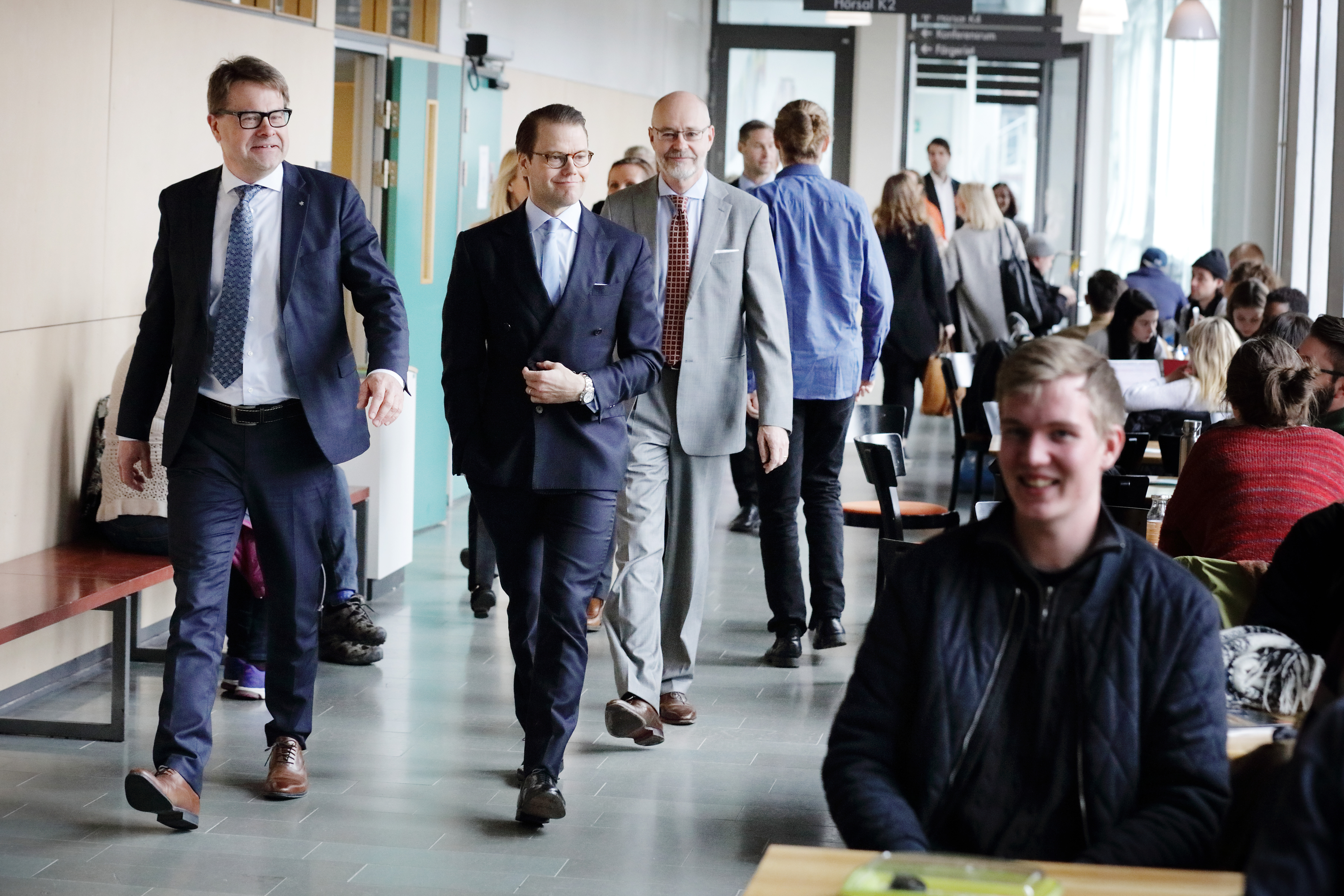 “We believe in the power of the good example. And we want to meet you students. We know that many of you could imagine becoming entrepreneurs, but few do.”

Prince Daniel – formerly an entrepreneur in the gym industry – was the main speaker when he visited Campus Norrköping. He is the initiator of the Prince Daniel Fellowship project, which seeks to inspire young people to entrepreneurship and to support them.

Photo credit: Magnus AnderssonTo provide different angles of approach to running a company, a panel of experienced entrepreneurs was assembled: Stina Honkamaa Bergfors, former head of Google Sweden, who two years ago started United Screens, which helps creators on YouTube; Renée Voltaire, who created a food and health brand; and Johan Skarborg, founder of Academic Work, which hires students and young academics at the start of their careers.

“Back then in the 1990s, I thought that my two friends and I were alone with our business idea. We weren’t, as we discovered. We had at least eight competitors. But it was good, because then there was obviously a market. We decided to become better than the others,” Mr Skarborg told us.

Today the company is found in all the Nordic countries, Germany, and Switzerland.


Prince Daniel and the audienceIt takes a lot of blood, sweat, and tears to build a company, the panel noted. But also a lot of joy and creativity. Ms Honkamaa Bergfors chose to leave her job as head of Google because she and a partner discovered a new trend nearly two years ago.

“People were choosing mobile material instead of television, so we concentrated on YouTube. What we saw tallied with that. Today, regular television has lost one fifth of its viewers in two years.”

The panel agreed that education always pays, but also that the opportunities for entrepreneurship need to be made clearer in all degree programmes.

He also brought up the importance of daring to make mistakes, that they shouldn’t be seen as a failure.


“You just keep it up. Sometimes things go smoothly, sometimes they don’t. You learn from your experiences. Look at Niklas Zennström, the founder of Skype. He made a broad range of mistakes with his earlier companies, but thanks to that he could then found Skype.

“All the setbacks take you to the next step, where you really believe in your idea,” Ms Voltaire noted.

The Prince also stressed the opportunities for entrepreneurship to affect societal development.

“Those of you who own your own business can do good things, for example on issues of the environment and sustainability, and you can employ people with different backgrounds.”

After the seminar, some of the students participated in a round-table discussion with the panel.


Linnea Rothin, who is studying media technology, is one of them.

“It’s really inspiring to hear the different ways in you could have into running your own business, and that you can see setbacks as a step in the process towards a goal.”

She can imagine starting her own business someday.

“I have to think about what I want to do. For a year now, I’ve been running the CoderDojo association, which teaches programming to children. Then it’s a matter of setting a goal and thinking business, so in a way I’m already into the idea.”

Niklas Aldén is studying engineering physics and has been running businesses since high school, with a focus on media production and advertising films, and an e-commerce business in the exercise industry.

“I’m inspired by meeting people who talk about their own journey, and by getting their different viewpoints on the same problem.”

He is looking for more entrepreneurship in his education.

“So far – I’m in my first year – there’s very little of it. Above all, I’d like to take more courses in economics.”

The arranger was the Royal Swedish Academy of Engineering Sciences (IVA), which runs the Prince Daniel Fellowship.