The zebra fish, whose natural habitat is south Asia, has been made much of as an animal for experimentation since the 1990s. Now Linköping University researchers will also have access to the little fish that, among other things, have the advantage of being transparent. 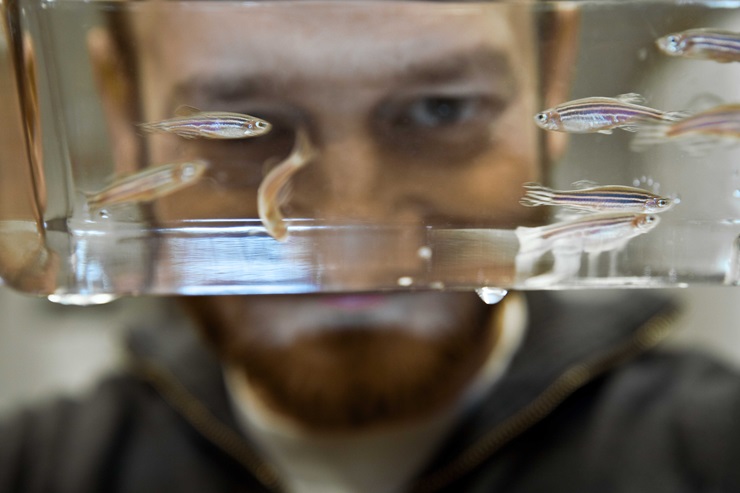 There will be space for 15,000 fish in the recently installed aquarium system developed by Lasse Jensen, post-doc in physiology. After a long, rough journey, all the pieces were in place and all the permits ready in February 2013.

Danio rerio is the taxonomic name of the fish, which grows up to eight centimetres long. It is not difficult to see where it got its popular name. But in truth most researchers are not after the fish itself. It is the embryos that attract their interest.

“In the embryo, you can see all the cells and organs while they are developing. They can be kept alive under a microscope, unlike mouse embryos, which must be killed. And they develop unbelievably rapidly – they have a heart and circulating blood after only 24 hours,” Jensen says.

His own research looks at how lack of oxygen affects blood vessels in two model systems: the retina of the eye and breast cancer tumours.

If the oxygen content is low the blood vessels grow in an attempt to compensate for the shortage. But the quality of the vessels becomes worse, and there may be leakage with attendant risk of bleeding in the retina. This can lead to the condition retinopathy, which affects diabetics, among others.

In the project that Jensen is running together with oncology professor Charlotta Dabrosin, tumour cells are injected into forty-eight hour old embryos. A small tumour is created and the researchers can follow the growth of the blood vessels and even see which genes are involved. An experiment of this nature only takes one week.

The story of the zebra fish as a lab animal begins in the 1970s, when American geneticist George Streisinger imported them into his lab at the University of Oregon. During the 1990s, a couple of research consortia began to screen mutations in the species and in 1996, 43 articles were published in one and the same edition of a journal. In 2002, the first transgenic individuals were created; currently around 50,000 articles featuring the zebra fish are published each year.

In the rebuilt laboratory premises next to the Division of Pharmacology, Jensen now has over 300 fish tanks with 50 adult fish in each. Great care is taken with cleaning and oxygenating the water. There are particle filters, UV light, and biological cleaning. The water has to be maintained at a steady temperature of 28 degrees, like in the tropical rivers where they come from. They go to sleep at eleven o’clock in the evening and sleep until nine when the lights are turned on.

In order to start a new population selected males and females are allowed to woo each other in a special container with a net at the bottom. As soon as the morning light arrives they begin their game. The fertilized eggs fall through the net and the embryo development begins. A female can lay 200 to 500 eggs once a week.

Hygiene is carefully maintained in the fish tanks. In the long term it is almost impossible to avoid fish diseases, for example a form of tuberculosis that attaches to the gills. The worst are intercellular parasites like Microsporidium.

• Rapid development. Two days after conception it has a beating heart with circulating blood, brain and seeing eyes.
• Transparent at all stages.
• Easily manipulated genes. Up- or down-regulation with a simple injection.
• Popular with pharmacologists. The fish immediately absorbs any substance introduced into the water
• Fairly similar to humans. As a vertebrate it has a more advanced nerve and circulatory system than, for example, the fruit fly and the roundworm C. elegans.
• Low costs. An experiment is 1000-10,000 times cheaper than the equivalent on a mouse.

Heriberto Rodriguez-Martinez, professor and head of the Centre for Biomedical Resources (CBR), was interviewed about animal experiments at Linköping University, which are going through major changes.