Three researchers from abroad, a business leader, a cultural personality, and an initiator of new research will become honorary doctors at Linköping University. This will take place in a ceremony at the end of May.

The Faculty of Arts and Sciences has chosen Stefan Hammenbeck, art curator at the Östergötland Museum, as honorary doctor. He has worked his entire professional life in the field of culture, art, and handicrafts. Mr Hammenbeck is a very popular lecturer, but he has also been the editor of several volumes and written many articles within his field of knowledge. In collaboration with researchers at the Faculty of Arts and Sciences, he has constructed a centre for folk art in Östergötland. He is also active on the programme council for the Cultural Sciences degree programme and the Programme for woodworking, handicrafts, and design.

Photo credit: Foto KirschGerman philosopher Sybille Krämer, who works at Freie Universität Berlin, has also been chosen as an honorary Doctor of Philosophy. She is an outstanding language and media theorist, with a clear interdisciplinary orientation. Her language philosophy is focused on ‘performativity’ – how language, for example, does not only describe violence but also uses violence. In her work on media philosophy, she studies the significance of the digital revolution for the humanities, and shows the need to renew thinking around language, knowledge, and media. Her works have played an important roll for research in linguistics and literary studies at the Faculty of Arts and Sciences.

Drew Berry, cell biologist and medical animator at the Walter and Eliza Hall Institute of Medical Research in Melbourne, has been chosen as an honorary Doctor of Technology. His 3D and 4D animations focus on explaining cellular and molecular processes in molecular biology, malaria research, cell death, cancer, haematology, and immunology. His animations have been shown at some of the world’s leading museums. He has been awarded an Emmy and even received attention for his work on the video for Björk’s song “Hollow” from her album Biophilia. Over the last few years, Mr Berry has collaborated on research in media technology at Campus Norrköping and produced animations for both research and educational purposes. In an ongoing project with the University of Vienna, he is developing advanced animations of cells in real time for interactive productions in dome theater environments. 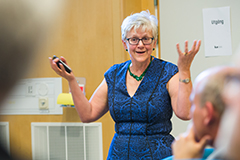 Photo credit: Thor BalkhedJill Trewhella, also chosen as honorary Doctor of Technology, is a leading biophysicist who uses methods from physics to study and understand the function of biomolecular structures. She has constructed completely new research around the interaction of proteins and how structural changes in large biomolecular complexes can be studied in detail using neutron diffraction. Ms Trewhella is Professor Emerita from the University of Sydney, where she was also deputy vice-chancellor for research. For several years, she has been involved in interdisciplinary research collaboration with researchers at the Faculty of Science and Engineering. For this, she was selected as the holder of the 2015 Tage Erlander guest professorship at the Swedish Research Council.

Photo credit: PicasaJohan Söderström, CEO of ABB Sweden and chair of the Teknikföretagen employers’ association, will also become a Doctor of Technology. He has been a driving force in the research project between ABB and Linköping University since the 1990s. He was, for example, heavily involved in the IMIE research school, and also directly in the research with a special focus on industrial sales. As an alumnus of Industrial Economics (‘82), he has always been a very strong friend of Linköping University. Mr Söderström contributed in the highest degree to the strategic partnership agreement between ABB and LiU, and shows great interest in joint development projects – for example, the Wallenberg Autonomous Systems Program (WASP), a billion-SEK investment in research into autonomous systems. 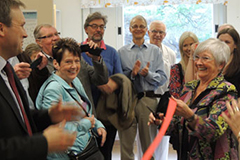 Ingrid Asp has been selected as an honorary Doctor of Medicine. She is the initiator of two research-focused foundations at Linköping University. The foundation for research into psoriasis and eczema has established a research center with seven associated researchers who are trying to solve the mystery of psoriasis, a widespread disease. The foundation for renal medicine research has funded a professorship in renal medicine and contributed support to research projects in the field. Thanks to Ms Asp’s initiative, two successful new research areas have been established at the Faculty of Medicine and Health Sciences.

All six honorary doctors will have their doctorates conferred at a conferment and inauguration ceremony in De Geer Hall in Norrköping on 28 May.