Professor on a skateboard

Gerhard Andersson is the most highly renowned psychologist at LiU and winner of the Nordic Medical Prize. He has double doctoral degrees and a publication list with over 550 scientific articles and 20 books. But in the skateboard hall, all that counts for nothing. 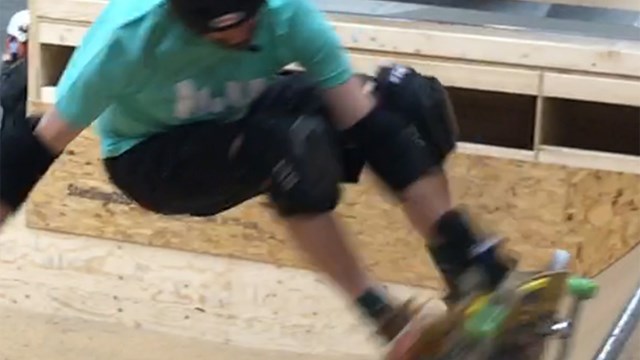 Gerhard Andersson started to skateboard at the end of the 1970s when he was 12 years old. Together with friends Tony Hesse and Mikael Nyqvist, he defied the local council regulations in Norrköping, which prohibited skateboarding in public places, and constructed his own ramps in secluded spots.

“The authorities were quick to prohibit skateboarding in most towns, when it was starting to become popular in Sweden,” remembers Gerhard Andersson. “Things were tougher in Norway, where all skateboarding was illegal. This may have been because skateboarding was an American thing – remember that this was the 1970s. In addition, there was a scientific report from the US about a youth who had been killed while skateboarding when a car hit him. The adult world drew the conclusion that skateboarding was dangerous and banned it in public places.”

Gerhard Andersson, however, survived and continued to skateboard. Until, that is, student life and other interests took over.

“You are influenced by your surroundings, other people and current trends. When I was a student in Uppsala I started to play in some bands and in the student orchestra. And then work, research, took over. But I still used to skate occasionally in the summers when I came home to Norrköping, and when I was around 21-22 I was still pretty good.”

It would be around 30 years before Gerhard Andersson got back onto a skateboard. And what got him back on was passing a display window in Stockholm about a year ago and seeing exactly the same board as he had once owned at the end of the 1980s, with a cool skull design.

Today, anything is just a click away. And once he had the board, Gerhard found the path to the skateboard hall in Norrköping in the summer of 2015 easy to tread. Rather shaky to start with, more worried about injury, and now completely legal. And just as much fun as it used to be.

“When I first got back onto the board I was really dizzy, but it only took a day before I could ride down the edge of the ramp again. And since then I’ve mastered more and more tricks. I now go skateboarding every weekend. Of course there are bruises, and for us old timers protection is a must, but skating just give me such a kick, doing something so physical and in an environment where double doctoral degrees don’t mean a thing.”

Back then, at the end of the 1970s, there weren’t any adults in the skating community. “We didn’t have trainers and the activity was more or less secret.”

“One negative aspect back then was that there was a certain degree of bullying of younger skaters,” says Gerhard Andersson. Today, however, when several generations are active in skating, there is nothing like that. “When someone performs well in the skateboard hall, the other skateboarders thump the ramp as applause. This reminds me of CBT therapy, where reinforcement of behaviour is central. The noise made by the thumping is an immediate reward.”

There’s probably not many of Gerhard Andersson’s professorial colleagues who skate. But he is clearly not the only 50-year-old who does.

“It seems that it is people like me, for whom life has turned out well, who have continued to skate, or take it up again. There are at least 100 skaters in Sweden around my age, and an American Facebook group for skaters older than 50 has over 20,000 members.”