The PhD students working in the 5GWireless programme come from all corners of the world. They are attracted by the opportunity of contributing to a generation change in the mobile traffic network from 4G to 5G, with thousands of times more traffic at speeds of hundreds of Mbits per second. 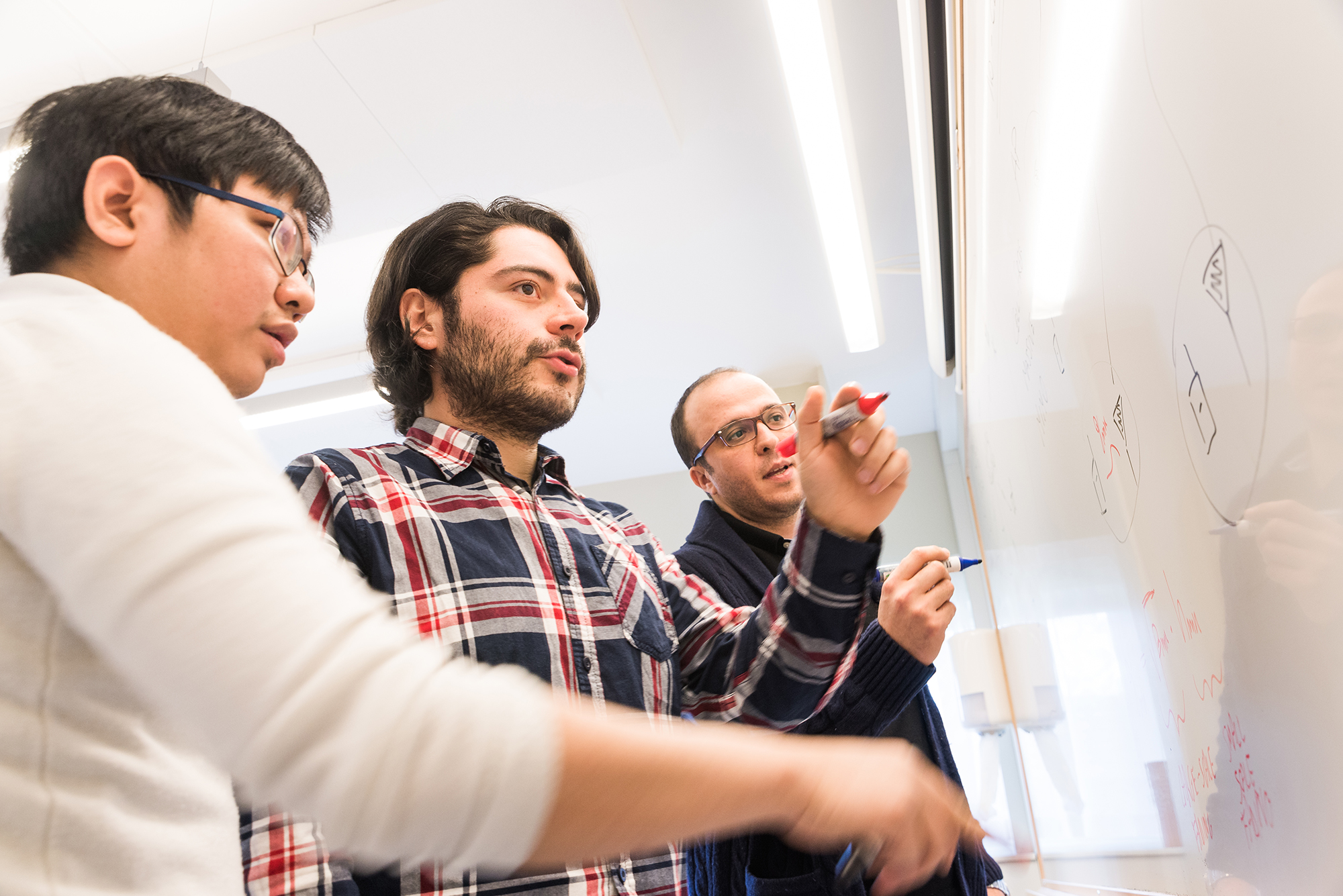 Trinh Van Chien, Giovanni Interdonato och Amin Ghazanfari, PhD students Communication Systems.It has been predicted that in 2020 there will be 50 billion wireless devices communicating with each other, video streaming available in our cars, and untold numbers of sensors in our surroundings detecting both indoor and outdoor conditions. Fifth generation mobile technology is to connect all corners of the world, with a transmission capacity of hundreds of Mbits per second. It will reach nearly everywhere and offer response times of a few milliseconds. 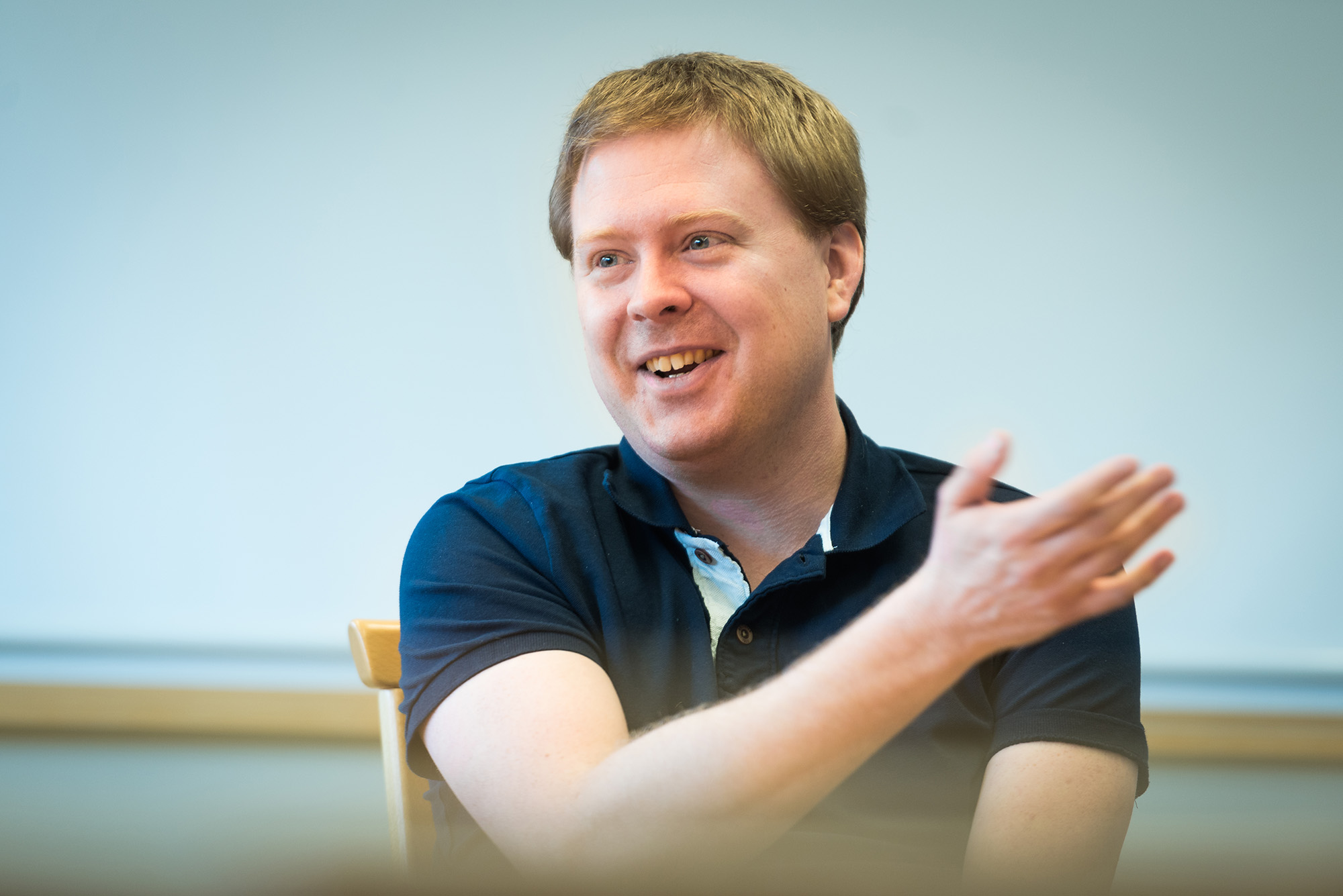 Emil Björnson
“Working with 5G is exciting because there’s so much happening. Our PhD students are here for 4-5 years and they can see the complete process, from the development of theory to commercially available technology,” says Emil Björnson, docent and senior lecturer at the Division of Communication Systems.

Together with Professor Erik G Larsson, he is in charge of the Swedish part of the Horizon 2020 programme 5GWireless, which is part of the Marie Sklodowska-Curie Innovative Training Networks.

The project has several goals, in addition to the actual research results. These include increasing the mobility of young academics (the PhD students must work in another country than their own), and giving the European telecommunications industry a lift.
Fifteen PhD students and their supervisors from five European universities are involved in the project, together with five companies, one of which is Ericsson.

“This is a unique project, since the PhD students have supervisors from several programme partners. They are also participating in a graduate school with courses in, for example, presentation techniques and how to protect ideas and apply for patents. They were recently in Dresden, and will travel to Paris during the spring. They’ll be at LiU this autumn,” says Erik G Larsson. 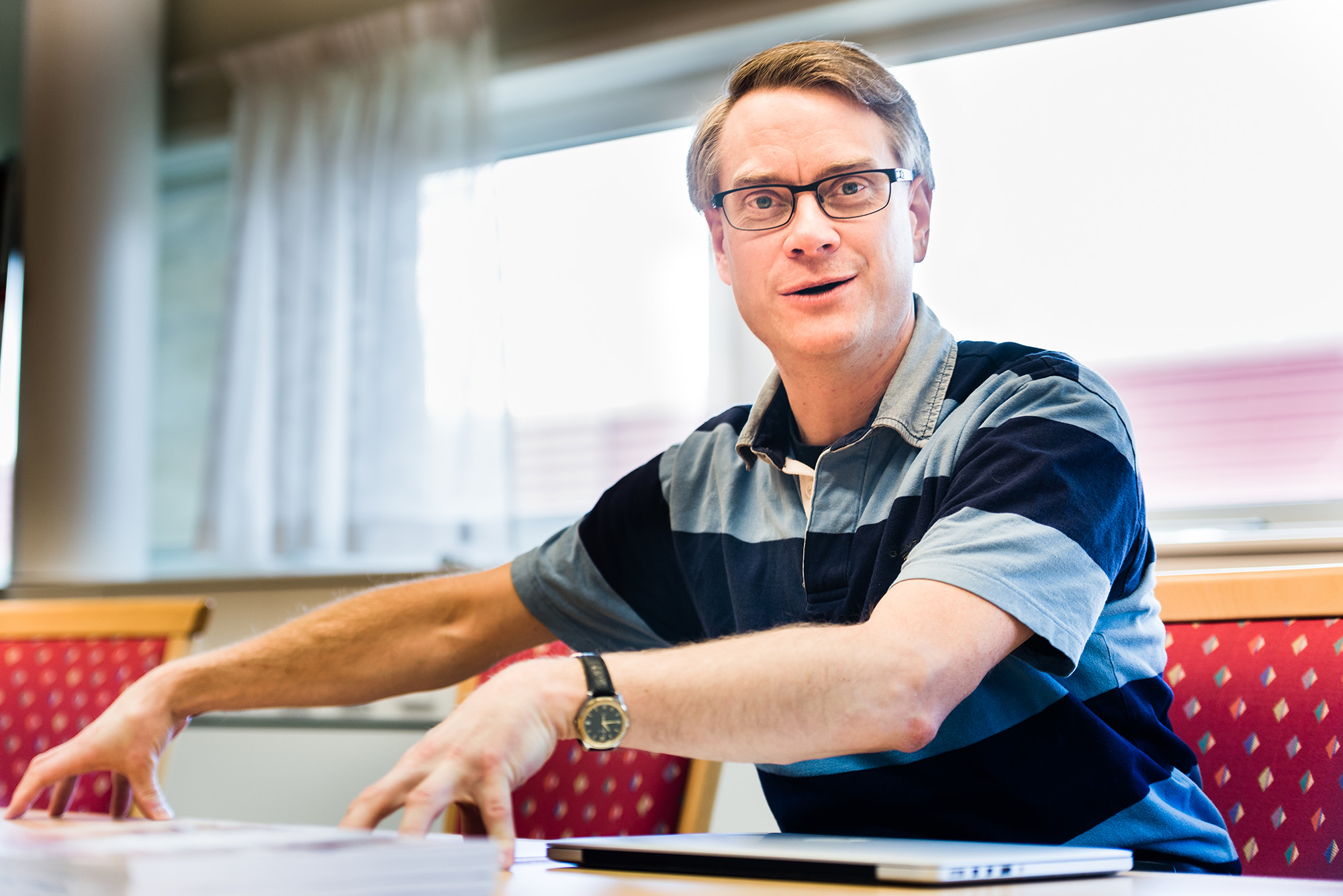 Professor Erik G Larsson
The research at LiU is centred around antenna technology known as “massive MIMO”, where Erik G Larsson and his research group lead the field.

MIMO is an acronym for “Multiple Input, Multiple Output”, and the technology is based on replacing the large currently used antennas – grey units weighing around 50 kg with a power of around 40 W – with hundreds of small antennas, each with a power of around 10 mW.
Each of the small antennas transmits a few tens of signals at the same time in different directions, and intelligent signal processing ensures that a strong signal is received by the intended receivers, giving just a slight disturbance at all the others. This gives a combination of low output power, high energy efficiency and superior capacity.

“Our research has a high industrial relevance, with a strong theoretical edge. The core of our work is clearly patentable,” says Erik G Larsson. 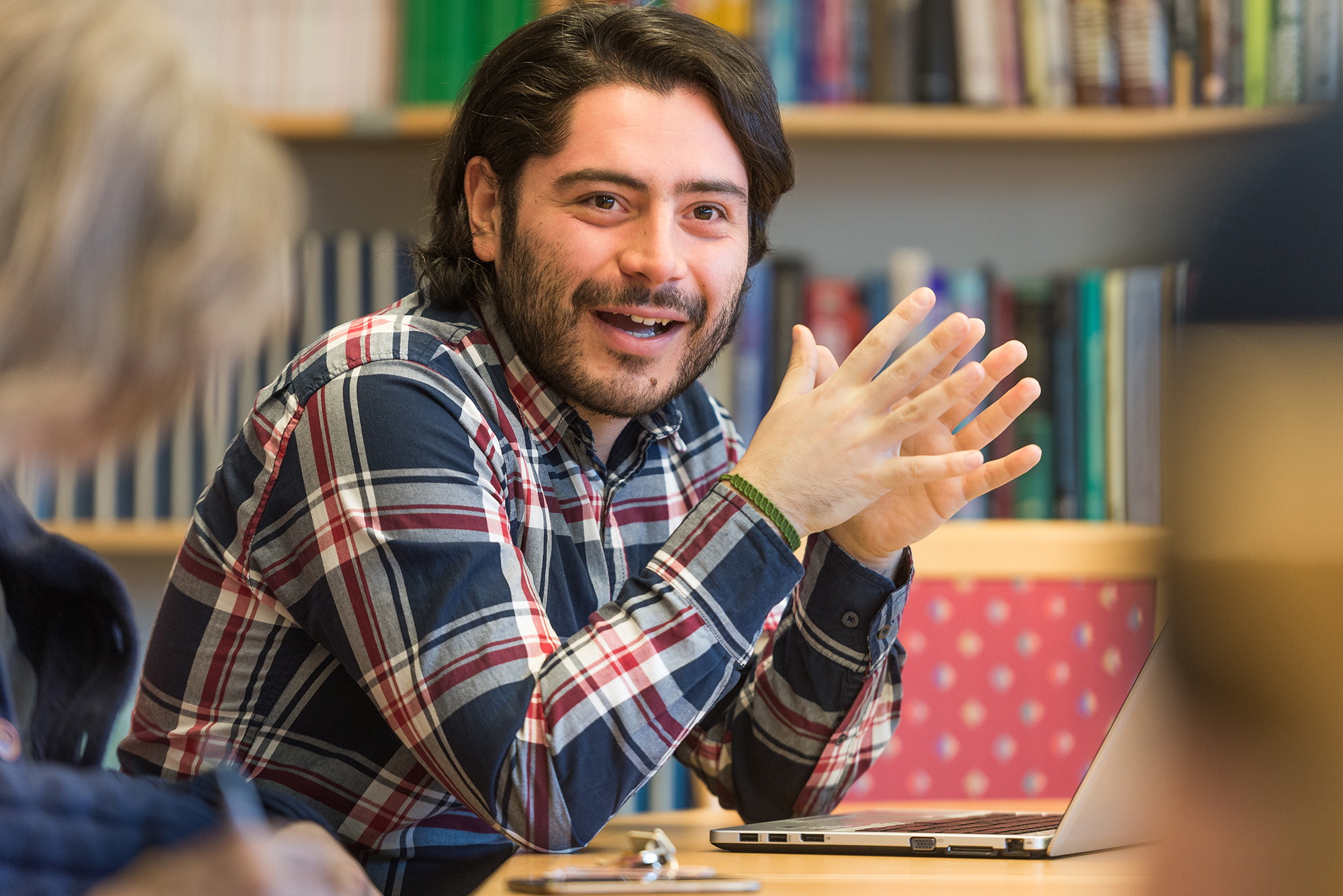 Giovanni Interdonato, PhD student.One of the three LiU doctoral students working on the project, Giovanni Interdonato, is from Italy. He is employed by the industrial partner Ericsson, and has already contributed to two patents. His research deals with what happens if you spread the many hundreds of small antennas over distances of around a kilometre, instead of collecting them in one place.

“I carry out mathematical analyses and simulations to determine whether a distributed antenna deployment works as well as a co-located one. It’s true that there is a higher probability that a user is close to an antenna if they are distributed, and this thus increases the coverage and efficiency. On the other hand, it also probably leads to greater variations in signal strength,” he says. 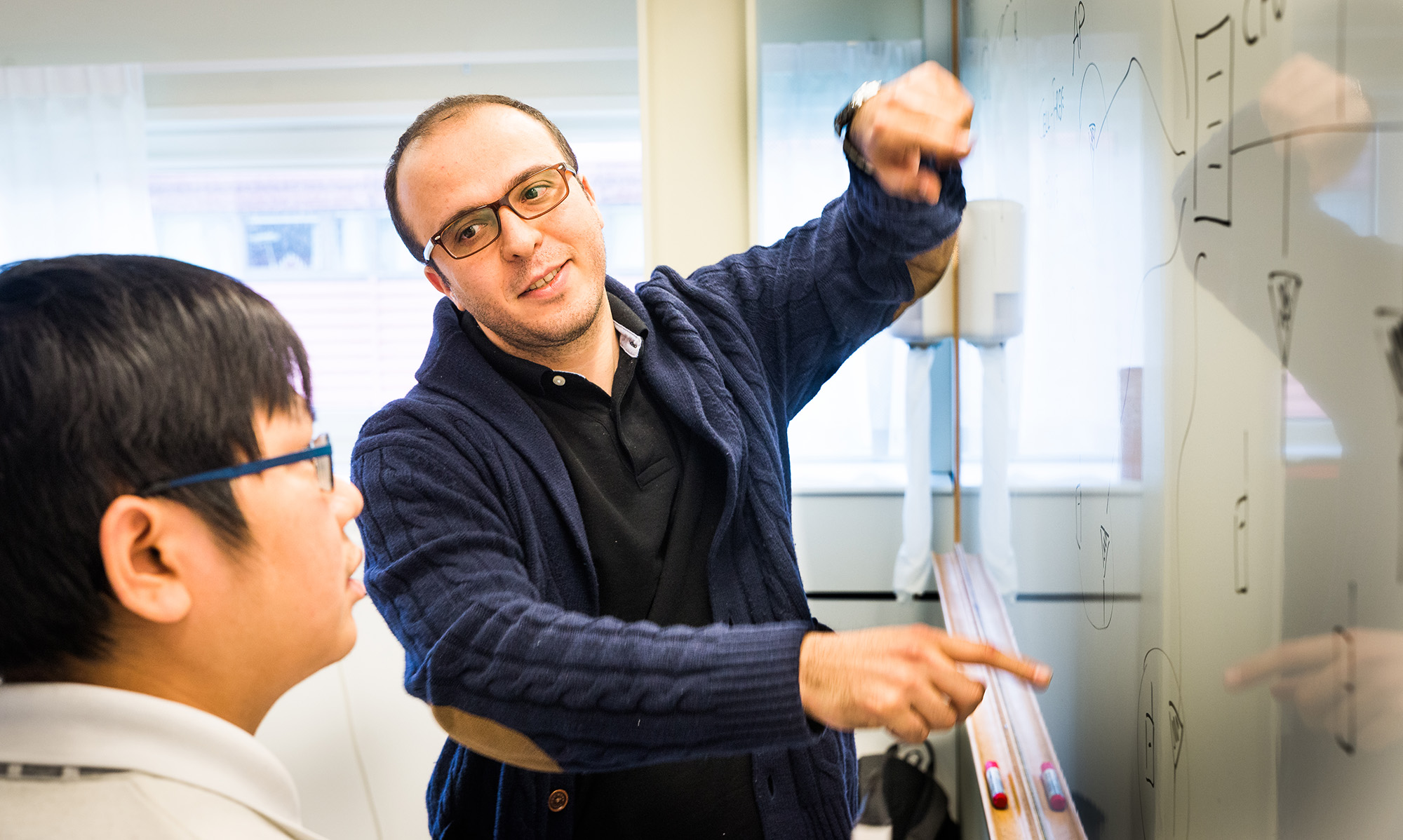 “If we can talk more quietly to the devices close by and more loudly to the base station that is to transmit the signal onwards, we can improve the efficiency. And energy consumption is lower, if we whisper to each other when we are close together.”

Trinh Van Chien from Vietnam is the third LiU PhD student working on the project. He works with load balancing, which is the technique used to ensure that several base stations in the system can collaborate to determine which one is to transmit signals to which recipients to achieve as high an efficiency as possible.

“There are strong commercial pressures to make 5G technology available. As soon as the next generation is on the horizon, investment in the current generation falls. The telecommunications industry in Europe is becalmed at the moment,” says Emil Björnson.

Ever since the first mobile network, NMT, was launched in 1981, a new version has been launched every 10 years. The next generation, number five, is expected to be on the market in 2020.

Will 5G really be out in 2020?
“We’ll have to wait and see. But whatever is ready to be launched then will be called ‘5G’ – this is what has happened in previous generational shifts,” laughs Emil Björnson.

MIMO is an acronym for “Multiple Input, Multiple Output” and the technology involves using hundreds of small antennas, each with a power of around 10 mW, that can be deployed in a shape that resembles a large computer screen.
All the antennas send a few tens of signals with carefully determined delays. The delays are chosen so that the copies of a signal arrive at the intended receivers at exactly the same instant, but at slightly different times at all other receivers. This gives a strong signal at the intended receiver and only a slight disturbance at all the others.

A hundred antennas each of 10 mW gives a power of 1 W, which is distributed among the receivers. This is considerably less than the 40 W that current antennas use. The low power is enough, since each signal is given in a specified direction. Massive MIMO thus provides a combination of low output power, high energy efficiency and superior capacity, since many receivers can receive signals at the same time.

The article have been published in LiU Magazine 2017

No one knows exactly what 5G is, except that the wireless networks will handle 1,000 times more data traffic.  This definition is part of the research task, in the opinion of Professor Di Yuan of LiU, who is leading a Horizon 2020 project.