An animal’s position in the group can affect its behaviour and personality, according to a study where researchers from universities in Linköping and Stockholm manipulated the social status of male domestic fowl.
Just like people, animals have different personalities. For instance, some individuals within the same species can be more disposed to risk-taking and exploration than others.

Interest in the new research field of animal personality has increased dramatically in the past decade. But we know relatively little about how the variation in personality types arises, or the reasons why individuals are consistent in their behaviour. One theory is that stability in other properties affects personality. One such property is the individual’s social status, that is, if the individual is in a dominant position or not. 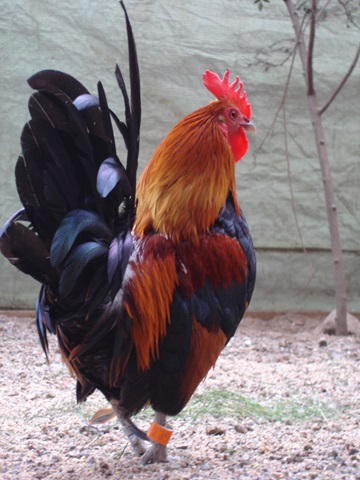 Foto: Hanne LÃ¸vliePrevious studies have shown that for several species there is a connection between the individual’s role in the social hierarchy and its personality type. Often it is the bolder individuals that end up in leading positions. However the causal relationship behind this connection is not clear, because it can go in both directions: some personality types are more easily able to seize a dominant position; on the other hand, behaviour can be affected by the individual’s position in the group. By manipulating the social status of male domestic fowl in repeated personality tests, researchers in Stockholm and Linköping have clarified cause and effect. The results have been published in the journal Proceedings of the Royal Society of London B.

According to Hanne Løvlie, evolutionary biologist at Linköping University, male domestic fowl are particularly suitable for investigating such a relationship.

“Male domestic fowl vary in terms of personality, and they form relatively stable dominance hierarchies where high-ranking males are more vigilant and vocalise more than low-ranking males. In our new study we show that the high-ranking ones are also more active when we investigate their behaviours in personality tests.”

Eighty-four male domestic fowl of the old game breed “gammalsvensk dvärghöna” were divided into pairs consisting of one dominant and one subordinate individual. Various aspects of their behaviour were tested using a classic personality test for animals. Then new pairs were formed, consisting of two dominant males or two subordinate males. This way one male in each group had to change status.

When the researchers repeated the personality test it was clear that the social role affected the behaviour of the males. Those that had a dominant role demonstrated more vigilance, activity and exploration, unlike those that switched to a subordinate role. Their disposition to take risk did not change as much, which indicates that this is a personality trait that is not greatly affected by the animal’s current social status.

“Thus our results show that other factors than genes can affect personality. We hope that these results will result in other studies into the complexity and underlying factors of variation in personality, in other species as well, ” says Dr Løvlie.

“The results increase our understanding of how group dynamics interact with the individual’s behavioural responses,” says Anna Favati, PhD student in zoology at Stockholm University, and principal author of the article.

Article:
Social status and personality: stability in social state can promote consistency of behavioural responses by A. Favati, O. Leimar, T. Radesäter and H. Løvlie. Proceedings of the Royal Society of London B No 280, open access 14 February 2013.