Printed organic solar cells produce electricity from several of the windows at Tekniska verken in Linköping. Professor Olle Inganäs and his research group are leading the development towards the sustainable energy sources of the future. 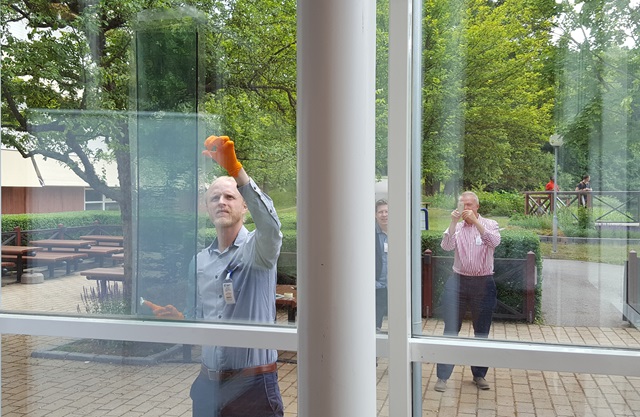 Photo credit: Tekniska verkenCheers and applause met Professor Olle Inganäs and his colleagues when their solar cell module turned out to yield 10 mA despite the sky being overcast. With a bit of white paper behind the transparent plastic film, the current increased to 13 mA. The voltage measured up to 25 volts, which meant an effect of approximately 0.2 watts.

It may seem very little, but with the idea that it came from a small piece of plastic film and that the sun’s energy is completely free, it is still an enormous step on the way towards increased use of renewable energy. It also requires less than 240 sun-hours to give back the energy needed to produce the solar cell module. 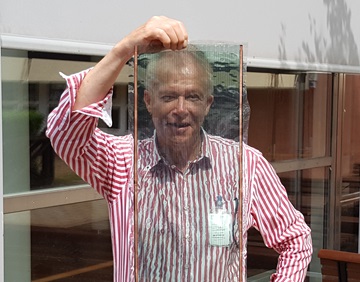 Photo credit: Tekniska verken“This is the result of 25 years of work. We have now carried over the results of many years of experiments in laboratory environments into a printable process,” says Olle Inganäs, professor of Organic Electronics at Linköping University – a pioneer in the field and one of the first to realise the potential of the technology when the first research results turned up in the United States and Japan in the early 1990s.

The material in the film isn’t completely smooth yet, which is affecting how efficient the solar cell is.

“We have a little more to work on in order to get the material homogeneous over the entire surface, but the work is in progress,” says Professor Inganäs, paying tribute to his gifted doctoral students.

The solar cell modules, which are printed at the Printed Electronics Arena in Norrköping, consist of layer upon layer of polymers printed from solutions onto a thin plastic film.

Two transparent electrode materials enclose a light-absorbent polymer layer, which creates a photostream when lit and thereby also voltage. The solar cell modules can then be linked in a series, and the current is extracted via metal electrodes on the outer edges.

“The most important characteristics are that the material is transparent, flexible, and can be printed on rolls. This makes it useful in a broad range of fields, such as protective sun film in windows that also produce electricity, or as a decorative surface layer on façades and windows,” Professor Inganäs says.

The solar cells can also be made to reflect different colours. Other advantages are that they are thin – less than a millimeter thick – and easy to carry or transport.

A roll of solar cells on your shoulder are a portable power station in environments with strong insolation. One of the first applications is charging mobile phones and other electronics in Africa,” he says.

Professor Inganäs’ research group, together with a Chinese researcher, also hold the current world record for energy efficiency in the next generation of organic solar cells. 11 percent of the energy in the sun’s rays are converted into electricity.

The efficiency in silicon solar cells currently on the market stands at around 18 percent after 60 years of development.

Henrik Lindståhl, development engineer at Tekniska verken, is more than satisfied with the demonstration of the solar cell modules:

“Our energy supply is becoming more and more diversified, and there is great potential in Professor Inganäs’ research as it makes possible extremely material-efficient solar cells that can be produced at a very low price. They are even easy to take out once they’ve worn out. We want to contribute our knowledge, and we’re ready to make use of any opportunities, like we did with district cooling, broadband, and biogas – which were completely foreign activities for Tekniska verken a few decades ago.”

Organic printed solar cells will soon be in a window or a bag near you. In “Sunflower”, the recently-concluded EU project, researchers and businesses brought the technology a great deal closer to our everyday lives.

Capturing photons on a plastic roll