Many visitors at opening of student accommodation

New student accommodation in the Irrblosset development of Linköping has been opened. At the same time a work of art in the form of a façade painting, dedicated to Linköping University and its 40th anniversary in 2015, was unveiled.

Many people wanted to look round the new accommodation in the Irrblosset development of Valla, which once was home to part of Valla Hospital. Completion of the first stage of the development saw the opening of 60 apartments. A total of 218 new apartments is planned, which will bring the number of student apartments in this development to nearly 750.

“This is a perfect location, between the university and the centre of the city. And there are great outdoor areas here with a gym, volleyball court and barbecue sites, together with a floorball hall,” says Simon Helmér, managing director of Studentbostäder, the company that is responsible for the project.

The building that is now being opened is four storeys high and contains one-room and two-room apartments. Two further buildings six storeys high are being built. 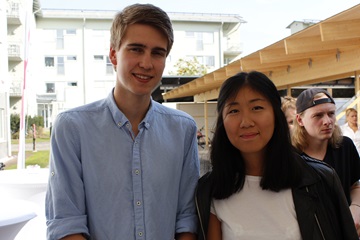 Photo credit: Elisabet WahrbyFelicia Kuang and Leo Brandt are studying medicine and will move into a completely new two-room apartment at the start of October. The rent will be around SEK 8000 per month, including electricity.

“This is a perfect location for us. The rent is a bit higher than we wanted, maybe, but you have to expect to pay this for newly produced apartments,” says Felicia Kuang.

“A lot of our friends live here, so it’s even more fun for us,” comments Leo Brandt. 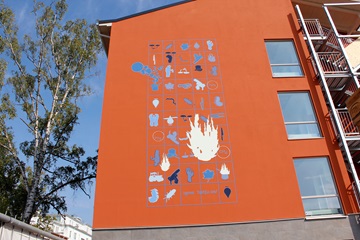 The work of art, Foolish fire, which is a façade painting on the new building, was unveiled during the opening. This will be seen by thousands of students and university employees who pass every day on the way from the university. Artists Katja and Oskar Aglert were present at the unveiling.

The name “Foolish fire” reflects the Swedish name of this area, “Irrblosset” (“fen-fire” or “will-o’-the-wisp” in English). There’s no real reason why this area is known as “Irrblosset”. Fen-fire arises when gases produced from dead organic material are released in a swamp, and burn with an eerie blue flame. “We have created a number of representations of such fire on the façade. Some of them will be illuminated in blue during the night, for one minute every hour,” explains Katja Aglert.

Vice-Chancellor Helen Dannetun expressed the university’s gratitude for the piece, and took the opportunity to draw a parallel with the illumination that knowledge gives. She also mentioned how popular the ballad “Stad i ljus” is among students.

“This is an integral part of student life in Linköping, and is sung, among other occasions, at all graduation balls. Now we have a building illuminated by light also,” concluded Helen Dannetun.