Our digital future in focus at autumn seminar

World-leading research in digital technology and soft electronic materials will be in focus at the Knut and Alice Wallenberg Jubilee Symposium on 13 September. Electronic skin, social humanoids, organic solar cells and electronic plants are some examples of the technology on show. 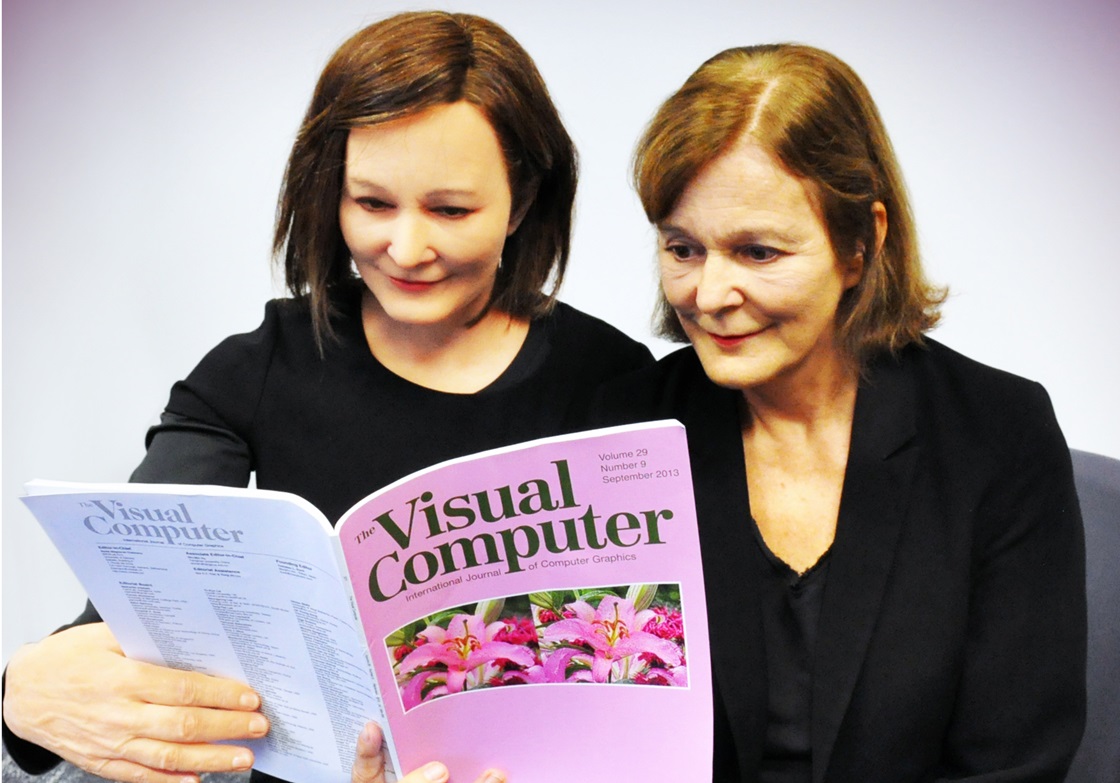 The social robot Nadine and her developer Nadia Thalmann. Photo: Nadia Thalmann/WikipediaIn 2017, the Knut and Alice Wallenberg Foundation celebrates 100 years of supporting excellent Swedish research and education. This will be marked with six jubilee symposia at various Swedish universities, organised by the Royal Swedish Academy of Sciences. The jubilee symposium at Linköping University will gather researchers from the US, Asia and Linköping University.

“We have invited leading researchers from several fields, who are associated in one way or another with our research areas,” Olle Inganäs, professor in biomolecular and organic electronics at Linköping University, and principal organiser of the symposium, informs us. “Two examples are Professor Zhenan Bao from Stanford, who works on electronic skin, and Nadia Thalmann, who holds professorships in Geneva and Singapore and who has developed the social humanoid Nadine.”

Olle Inganäs and his group at LiU are leaders in research into printed organic solar cells. They have achieved rapid increases in the efficiency of these cells, at a significantly lower cost and with less impact on the environment than solar cells based on silicon.

“This technology has the potential to solve the world’s energy problems,” says Olle Inganäs.

Other subjects to be discussed include social robots with hands that can both feel and heal, robots that are keen to collaborate with humans, and the visualisation of enormous amounts of information, which can help us to interpret complicated correlations.

The digital future that will be presented and discussed during the symposium is based on a long sequence of scientific advances in fields such as new soft materials, fundamentally new methods in the development and use of software, and knowledge about how to monitor and control huge systems of systems.

“Current developments within autonomous systems and software are a technological revolution that many are calling the ‘fourth industrial revolution’. This is why we decided in 2015 to invest heavily in the field, and granted SEK 1.3 billion for the Wallenberg Autonomous Systems and Software Program (WASP). In addition to the programme, the foundation has made several research grants in, for example, printed electronics and other research fields in this area,” says Peter Wallenberg Jr, chairman of the Knut and Alice Wallenberg Foundation.

The symposium, whose principal target groups are researchers, teachers and research students, will be held at Campus Norrköping on 13 September 2017. A limited number of places are available for LiU employees and students.

For more information and to register, KVA