The high quality of the materials science research carried out as part of the strategic initiative in advanced functional materials (AFM) at Linköping University is undisputed. 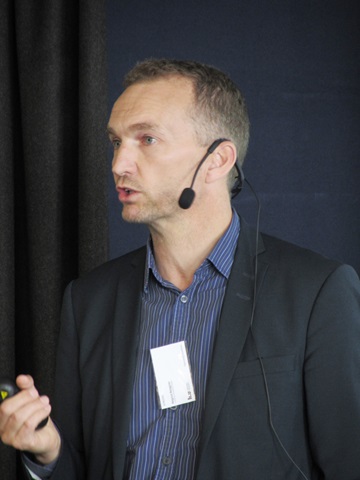 In the independent evaluation of the 46 strategic research areas held in 2015, AFM received the grade ‘Excellent’ in all three of the areas that the evaluation looked at. Not many others received the same,” stated Professor Magnus Berggren, director of AFM, in his speech welcoming delegates to the conference.

The strategic research areas (SRAs), are, however, now undergoing renewed assessment, and the commitment to long-term financing that the previous Swedish government gave is being renewed for only one year at a time.

Photo credit: Monica Westman“The present minister for higher education and research, Helene Hellmark Knutsson, says that the SRAs are important for Sweden’s development, but we will not know until the government publishes its research bill in the autumn in what form they are to continue,” concludes Per Dannetun, director of research at LiU.

He was, however, already able to warn that no further funds have been assigned by the funding bodies for infrastructure research.

“You will have to finance the equipment you need within the AFM budget in the future.”

The conference then offered many presentations of various lengths, covering such topics as the advanced ability of plants to interpret signals from the surroundings, piezoelectric fibres in textiles, fourth-generation supercapacitors from wood, water-resistant surface layers for graphene, the interface between bioelectronics and the body, highly durable alloys for gas turbines, materials for functionalised proteins, and many, many other topics.

A large poster exhibition presented most of the doctoral projects being carried out within AFM.

“These two days have been filled with a broad and exciting mixture, but there’s a risk that we sometimes forget that our mission includes making a contribution to meeting the challenges that society is facing,” said Magnus Berggren during the concluding panel discussion. 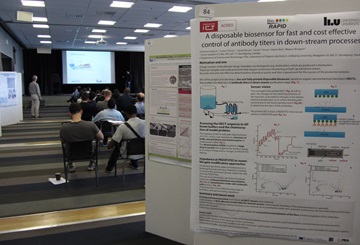 Photo credit: Monica WestmanHe then gave examples of two successful fields. The first was the collaboration between the thin-film physics research group led by Professor Jens Birch, and the European Spallation Source (ESS), which has resulted in the production of neutron detectors at the Wahlbeck Business Park in Linköping. The second was the collaboration between Magnus Berggren’s research group, Acreo Swedish ICT and the forestry industry, which–against a background of frustration within the pulp and paper industry around digitalisation–has led to the growth of a completely new research area–paper electronics–and three spin-off companies.

There should be space for more industrial connections and other actors within society, and the money that AFM has budgeted to finance patent applications has not been fully used.

“We must be sensitive to trends within industry, but not controlled by them. Be aware of requirements, interpret them, and see opportunities. We must find a common vision for the future,” said Magnus Berggren.

“Vinnova and other research funding bodies have projects in which there are opportunities for innovation and visionary thinking, but companies working in advanced functional materials have been reluctant to get involved,” said Göran Gustafsson, manager of the Printed Electronics expertise area at Acreo. 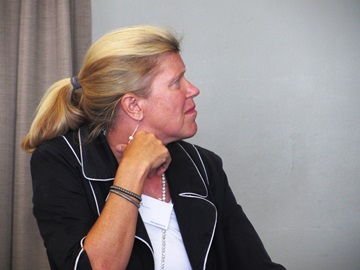 Photo credit: Monica Westman“I get the impression that everybody has known everybody else for years within the industry, and this doesn’t give much room for innovative thinking. Furthermore, it’s seldom that long-term visions are rewarded: people tend to look more at the latest quarterly result. More people from the industry should have been here and participated in the conference. Even though I may not have understood everything, I have been given loads of inspiration,” she concludes.

Conference participants had several ideas about how to ensure that more patents result from research and how to obtain closer ties with industry. These included: seminars for research students, contact with LiU Innovation, the employment of industry-sponsored research students, and several solutions such as the one that has been established in organic electronics, where Acreo takes responsibility for patentable ideas that arise from the Laboratory for Organic Electronics and the money generated is subsequently ploughed back into research.

Nearly 180 people participated in the two-day conference, most of them research students, post-docs and senior scientists at LiU, with several invited guests from Swedish universities, Europe and the rest of the world. The conference was held at the Vildmarkshotell in Kolmården, and those participants who dared were, of course, welcome to try the new fairground ride “Wildfire”.