Translating not just the words, but also the ideas

I work as translator from Swedish to English at LiU, and ensure that Swedish text is translated into correct, elegant English suitable for its target group.

An Englishman with a background in various fields of scientific research, I turned my deep love of, and interest in, language into my career. 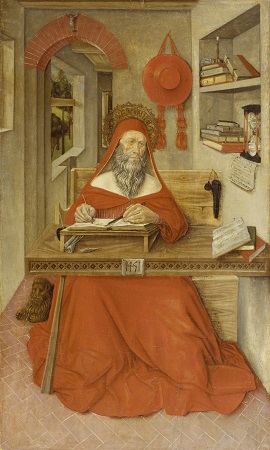 Saint Jerome (c. 347-420) was renowned for his translation of the Bible into Latin.

The writing implements, scrolls, and manuscripts testify to Jerome's scholarly pursuits. The sandglass and dying candle allude to the passage of time and remind the viewer that life is short. According to legend, the saint removed a thorn from the paw of a wild lion, which became Jerome's companion, here shown as a household pet. Jerome was considered to be a cardinal of the Church, and a cardinal's red hat hangs prominently on the back wall.