Associate Professor of Medical Genetics. I study the genetics of blood coagulation and genetic mechanisms in bleeding and clotting disorders.

Any form of bleeding can be perceived by the body as dangerous and is quickly corrected in a healthy body. When the defense against bleeding does not work as desired or is exaggerated, we get clotting disorders and become prone to hemorrhages or suffer from thrombosis.

Heredity is an important component in these both conditions. One of the oldest reports of hemorrhagic disease was described in the religious scripture Talmud as early as the 1st century. In the 10th century, al-Zahrawi (936-1013) described families whose members died of uncontrolled bleeding. Thrombosis has also a hereditary component. Changes in genes encoding coagulation factors or their regulators can lead to unwanted blood clots.

Platelets aggregate and clog in case of vascular damage to prevent blood loss. Some gene variants may lead to impaired blood platelet function, resulting in bleeding risk, while other variants may increase the risk of thrombosis.

My group is studying cancer associated thrombosis. Patients with various types of cancer have a several fold increase of risk for thrombosis compared to the normal population. The mechanisms behind this risk increase are complex and may be related to the cancer treatment, the individual himself or to the tumor features and location. Studies show that there are complex interactions between cancer tumors and blood coagulation. Tumors can release substances that activate blood coagulation and increase the risk of thrombosis. Knowledge on how such tumor genetic material is formed and interacts with the blood coagulation can increase our understanding of cancer and hopefully lead to better treatment strategies against the disease. 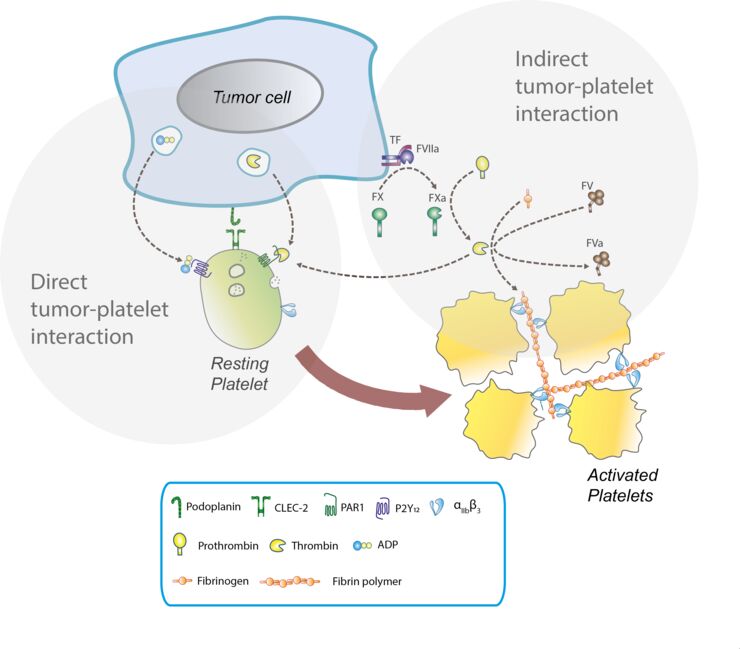 Interactions between a tumor cell and the hemostatic system. Courtesy of Dr. Niklas Boknäs.

If blood becomes too thin, a transfusion with blood platelets may be necessary – but potential pathogenic agents must first be rendered harmless.The substances used for this unfortunately also destroy the blood platelets themselves.

Division of Clinical Chemistry and Pharmacology