I am a social interdisciplinary researcher, mainly working on the intersections of
migration and feminism with influences from critical migration studies,
critical social psychology, post-structural philosophy and decoloniality.

Being all my life in contact with many worlds, I have developed a deep interest in thinking with the experiences of those whose attachments regard multiple worlds – even worlds that are contradictory to each other. Currently, I have found myself living in Sweden (Linköping), with my beautiful family in which we everyday express our αγάπη/amor (love/kärlek), στοργή/afecto (affection/tillgivenhet), φροντίδα/cuidado (care/omsorg) and θυμό/rabia (anger/ilska) in multiple languages, while our memories and attachments have the smell of the Mediterranean Sea as much as the smell of arepas from the streets of Bogota. Thus, I would say that I am a social researcher dedicated to qualitative interdisciplinary research that has everyday experience as its entry point. Although I am mainly academically trained in sociology and specialised in critical migration studies, having lived experience as my compass has endowed me with an epistemic toolkit to comprehend the entanglements of mobility, ethnicity, race, gender, sexuality and class in a globalised world that is infiltrated by coloniality and capitalism. My current research interests include the geo-politics and body-politics of feminist knowledge production within and beyond the Nordic academic context, the geopolitics and body-politics of mobility, as well as the past, present and future of home birth.

Since my bachelor in Sociology at Panteion University, Greece, I became interested in migration, which led me to my masters in Migration and Transnationalism in Nottingham, UK. Despite the limited duration of an MA in the UK (1 year), I conducted participant observation and in-depth interviews with international students in order to discuss their experiences through the lens of transnational studies. This first contact with qualitative research in the field of migration sparked even more my interest in following this academic trajectory.

The relation of my doctoral research with feminism was on an epistemological level. That is, the research was carried out with a feminist sensitivity not reduced to gender, but with a feminist awareness of producing knowledge by engaging with analytical tools and methodological strategies which were developed as a response to the white, hetero-patriarchal and positivistic academia. Thus, my entry point was everyday experience researched with the help of Collective Memory-Work.

CMW was developed by a group of German feminist leftist scholars influenced by critical psychology, who wanted to re-politicise and re-historicise experience within academic research, abandoning at the same time the rigid boundaries between researchers and researched and the split between theory and method.

When experience is approached in its embodiment and geo-political situatedness, it becomes a force that obliges different theoretical traditions to merge, breaking disciplinary dichotomies, and instead opening fruitful interdisciplinary dialogues. Thus, my ongoing interest in everyday experience understood as inter-relational, embodied, situated and geo-socio-political, has been ontologically and epistemologically central throughout my research trajectory. 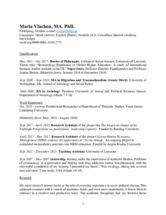 We are academics engaged in interdisciplinary research and teaching about bodies, identity, sex, gender and more.