Alumni of the Year 2017 are Sofie Lindblom, managing director of the global innovation platform ideation360, and Oskar Henrikson, managing director of Psykologifabriken and the gym for the soul, Habitud. Both are driven by a huge commitment, but the way to where they are now has involved detours for both of them. They received their awards in a ceremony at Campus Valla on 12 October. 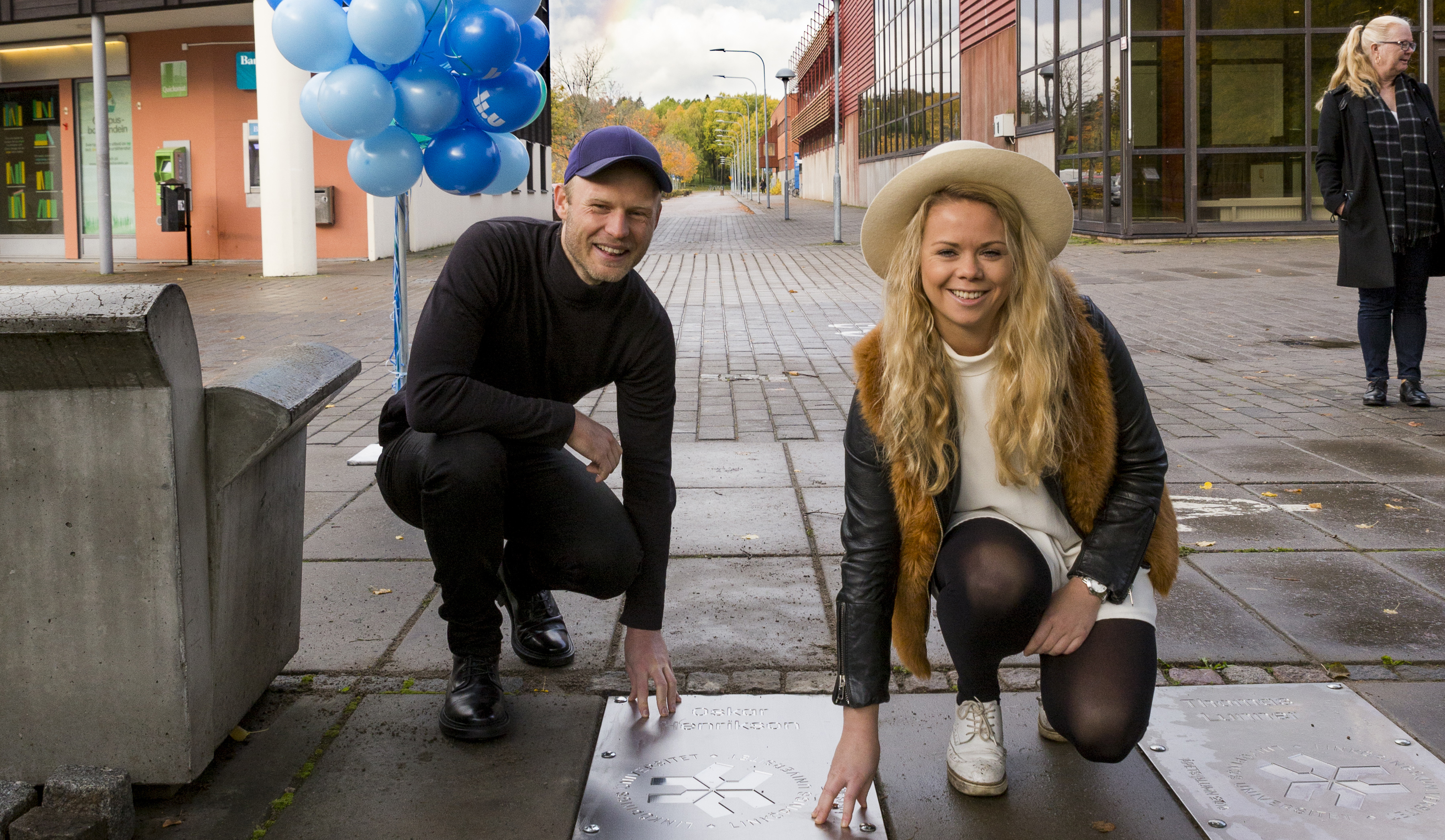 The celebrations started in the morning when Vice-Chancellor Helen Dannetun uncovered the shiny new plaque in the Alumni Walk of Fame. The row of plaques is right next to the building site for the new student building. As soon as construction work has progressed a bit more, the plaques commemorating the Alumni of the Year will be moved into the surroundings of the student building.

Oskar Henrikson and Sofie Lindblom then followed hosts from their respective faculties until it was time for the main attraction of the day: lectures and presentation of diplomas in lecture theatre C4. Balloons decorated the foyer to the theatre and a red carpet had been prepared for the visitors. Here, the audience enjoyed a snack of cider and sandwiches.

One of the people who had come to hear the Alumni of the Year was Frida Jansson.

“I’m studying medicine at the University Hospital Campus, but I’m also interested in psychology, so I decided to come to Oskar’s lecture. Sofie’s lecture will also be interesting: it’s great to find out about what’s happening in other parts of the university.”

Refused to be classified 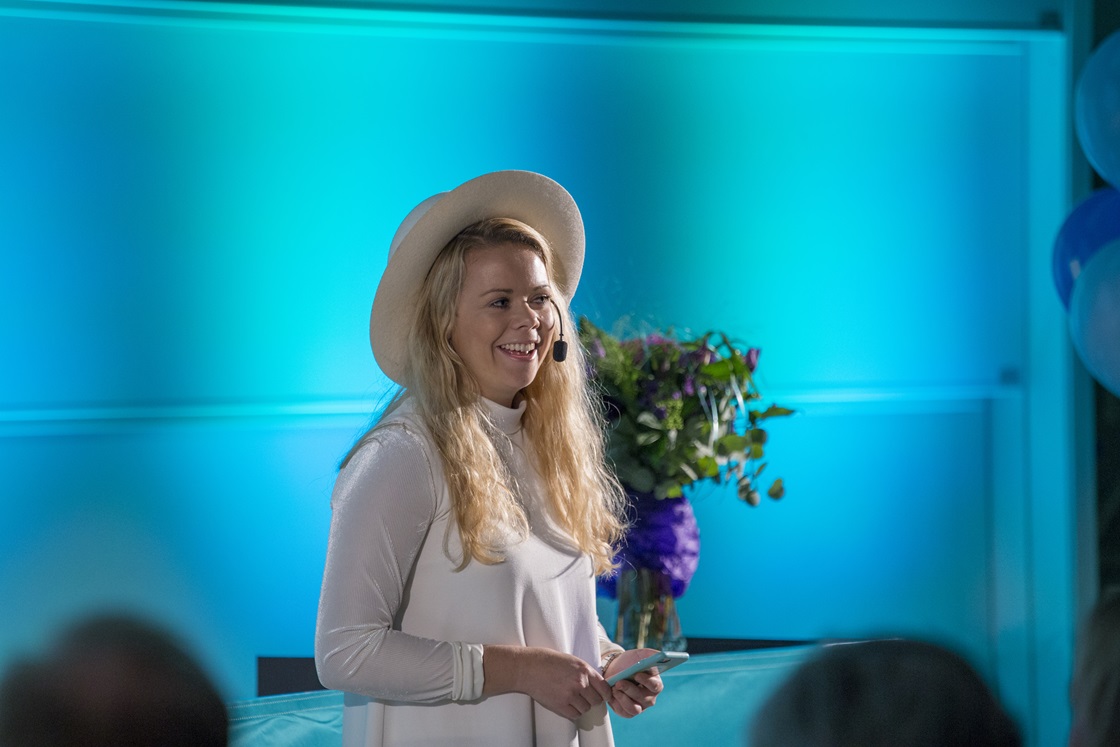 Photo credit: Peter ModinThe first point on the programme were songs from Jenni and Jonatan Skogsfors, commissioned for the occasion.

“This was marvellous. I love music and I love Robyn – many thanks!” said Sofie Lindblom when it was her turn on stage.

She posed a rhetorical question: How did I end up here? The route here involved some detours. To start with, she wasn’t admitted to her first-choice programme, but decided even so to come to LiU and discovered the Media Technology and Engineering programme. When she applied for a job at Spotify, she was also initially rejected by the company.

A second application was, however, successful, and she subsequently progressed in three years from part-time student ambassador to global innovation manager. After this, she had the courage to start something new, and became managing director for a newly established company.

Sofie Lindblom had four pieces of advice for the students in the audience. Dare to ask questions and tell people what you want, work harder than everybody else, and refuse to be classified.

So what was the fourth and final piece of advice? “Enjoy yourself!”

“And then it’s important to dare to test alternative ways and to remember that each one of us is a prototype. I’ve been privileged in being both employee and entrepreneur. When I was sitting at the school bench I didn’t know where I wanted to go, but no matter what – a university education is an extremely sound foundation for a courageous problem-solver.”

PBL drew him to LiU 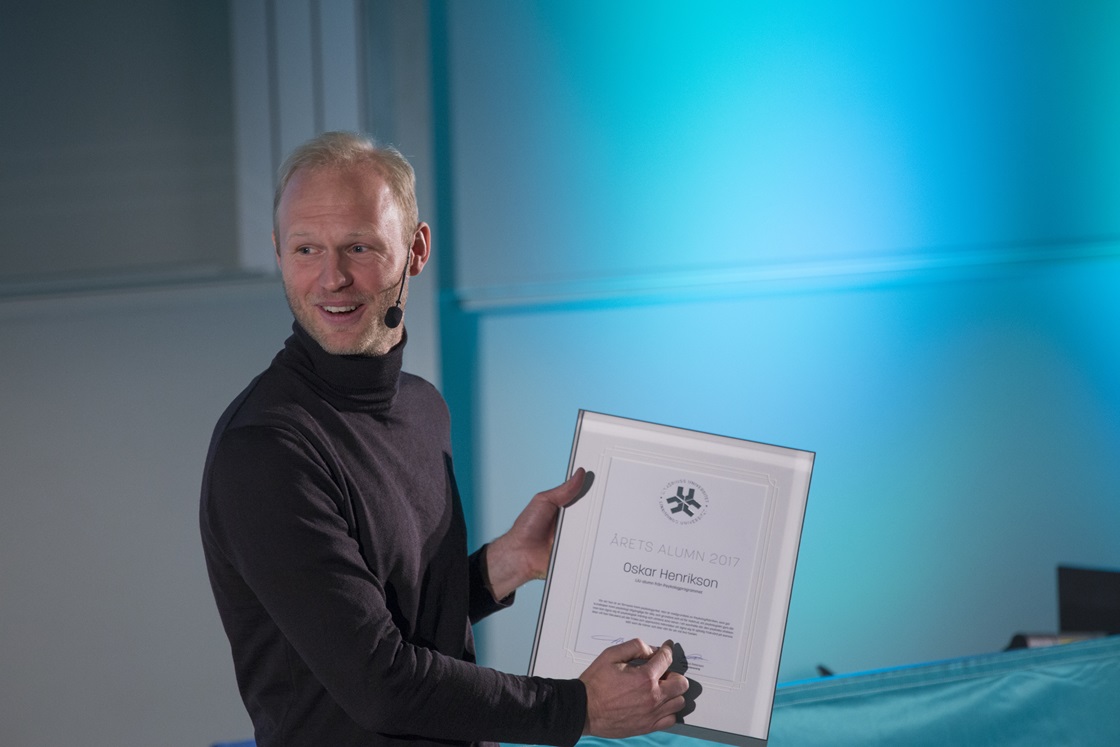 Photo credit: Peter ModinOskar Henrikson started his lecture by thanking his mother, who had stimulated his interest in psychology when she was retraining to become an upper-secondary teacher in the subject. He read her course books and found them fascinating, but found that many focused on negative aspects. When he was 13, he discovered his purpose in life: he was to become a psychologist who focused on mental health, and thus eliminate ill-health. He chose to apply to LiU due to its use of problem-based learning, PBL, and was admitted.

“But the expectation of arriving in paradise did have some negative aspects. I was expecting to discuss psychology all hours of the day and night, and save the world. There were others, however, who mainly wanted to use PBL as a way of reporting their individual findings.”

Oskar experienced difficulties in his personal life, and decided to suspend his studies. He took courses in drama at a folk high school, and rediscovered his motivation. And when he came back to LiU, he ended up in a group that wanted to discuss psychology at all hours. Oskar and his classmates arranged Sweden’s first national conference for psychology students in 2008, and this led him to a group of like-minded folk, who set up Psykologifabriken as a complement to their studies.

Collaboration within the group became somewhat laboured a few years later, and Oskar founded Habitud, which he describes as a gym for the soul. It publishes a mental training exercise every day. He also tested his own advice about how to create a habit, and went swimming outdoors every day for a whole year. Recently, things came full circle, with the merger of Psykologifabriken and Habitud.

“This award is not just about me, but also the groups that I have ended up in, and done great things with. My mother, my family, the students I studied psychology with, my colleagues – thank you all!

His words to the audience: “Think about the surroundings you want to create and to be in.”

Finally, the Alumni of the Year received their diplomas and flowers from the vice-chancellor.

“Nothing is more inspiring than two graduates who epitomise the ability, drive and knowledge required to do the amazing things that you do. Our alumni are an incredibly important part of our quality assurance,” concluded Helen Dannetun.

Interviews with the Alumni of the Year Show/Hide content

More about the Alumni of the Year award Show/Hide content