An armchair making an impression

Could this be a design icon of the future? Malmsten students Joel Fjällström and Rebecca Petrini decided they wanted to be noticed. They succeeded – their Mammut armchair is causing quite a sensation. 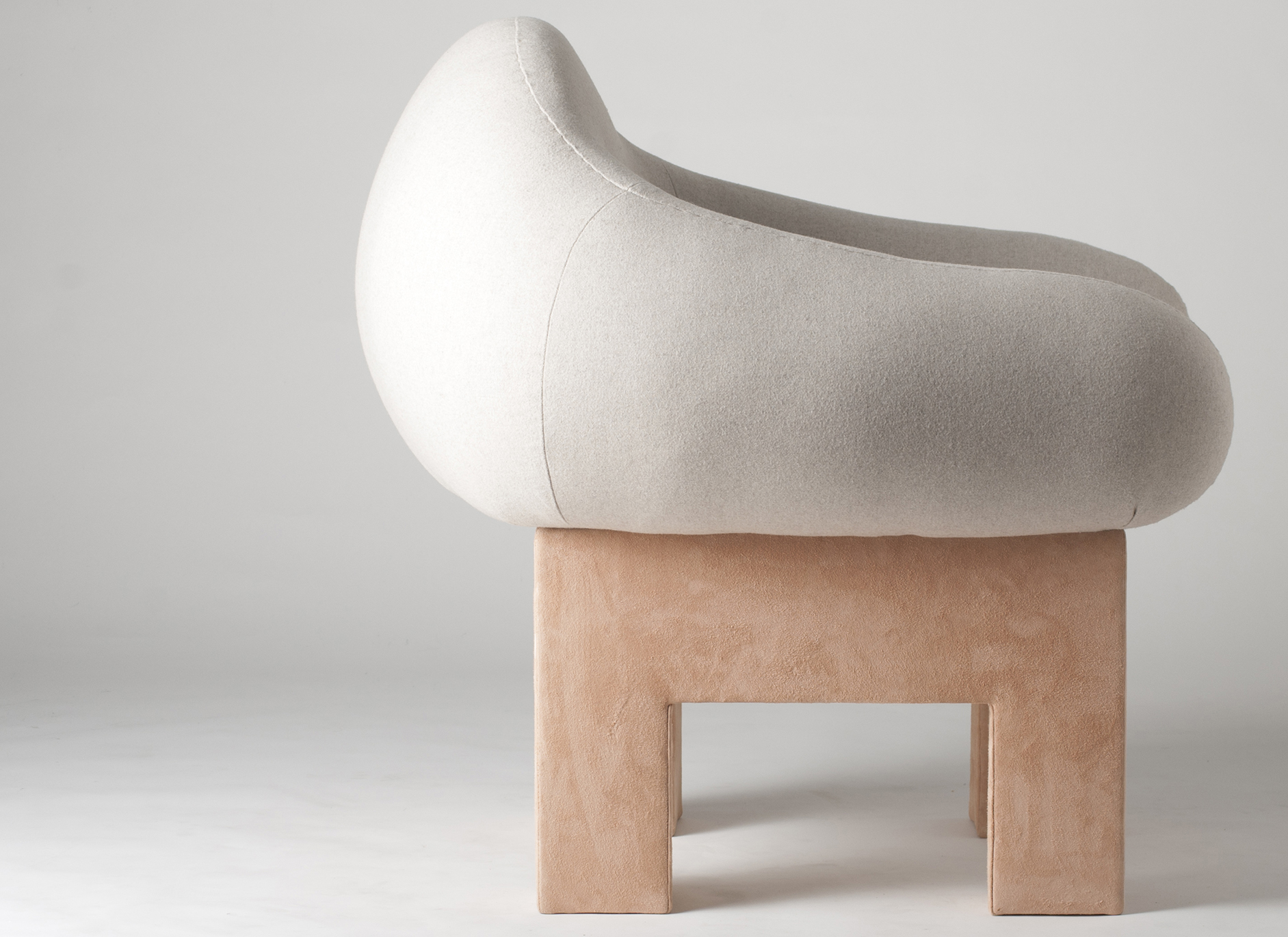 It has received an award for creative design from Young Swedish Design and a prestigious Danish scholarship. Not to mention having been tested by British royalty.
What a way to start your career, and what a way to end three years’ study at Malmstens Linköping University!
Joel Fjällström from the Furniture Design programme and Rebecca Petrini from the Furniture Upholstery programme created Mammut together during the autumn of 2017. For Rebecca, the work was part of her degree in furniture upholstery, while for Joel the project was simply for fun, not part of his degree.

Mammut is now part of a travelling exhibition in which the work of young designers is being promoted at several Swedish design centres, before ending up in Tokyo in October. The two students have previously taken the armchair to Stockholm Design Week, and to a major international furniture fair in Milan in April. In both cases, the armchair was one object exhibited in the Malmsten stand, along with other projects from LiU. 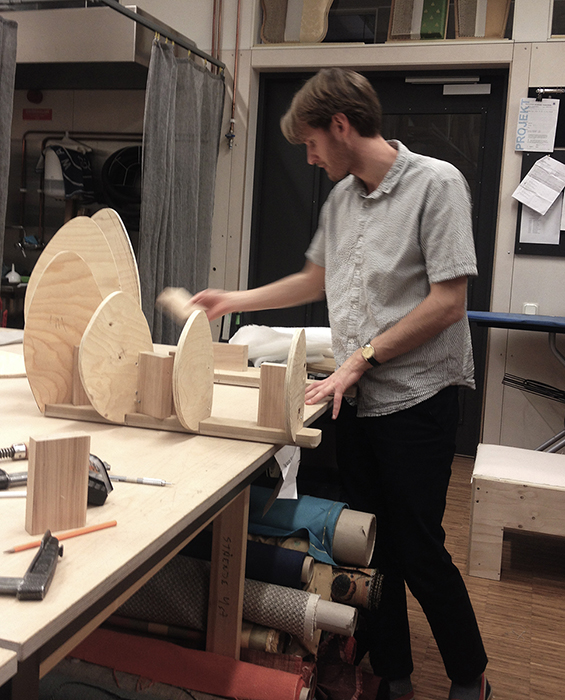 Photo credit: PrtivatJoel Fjällström and Rebecca Petrini have no idea how many hours they have put into the development of Mammut.
“It was many evenings and weekends! We wanted to take the opportunity to create something innovative, work with design and aesthetics and really chance our arm,” says Joel.
“We wanted to avoid getting stuck in stereotyped ideas, and work conceptually,” adds Rebecca. “We wanted to break the boundaries of practicality.”
They decided to create an armchair, an individual piece of furniture, without taking commercial and marketing factors into consideration.

The result is Mammut.
An armchair that both surrounds and can be surrounded. An aesthetic experience of a sculptural form in combination with tactile sensation.
The design process could start after Joel Fjällström and Rebecca Petrini had together sorted out details of idea and thought, form and volume, the combination of distance and nearness, aesthetics, and materials adapted to body and hand. The work started with Joel’s sketches and went through several mock-ups at different scales.
“I started with a clay model at a scale of 1:8 and ended up with a full-scale model of paperboard and chicken wire,” says Joel. 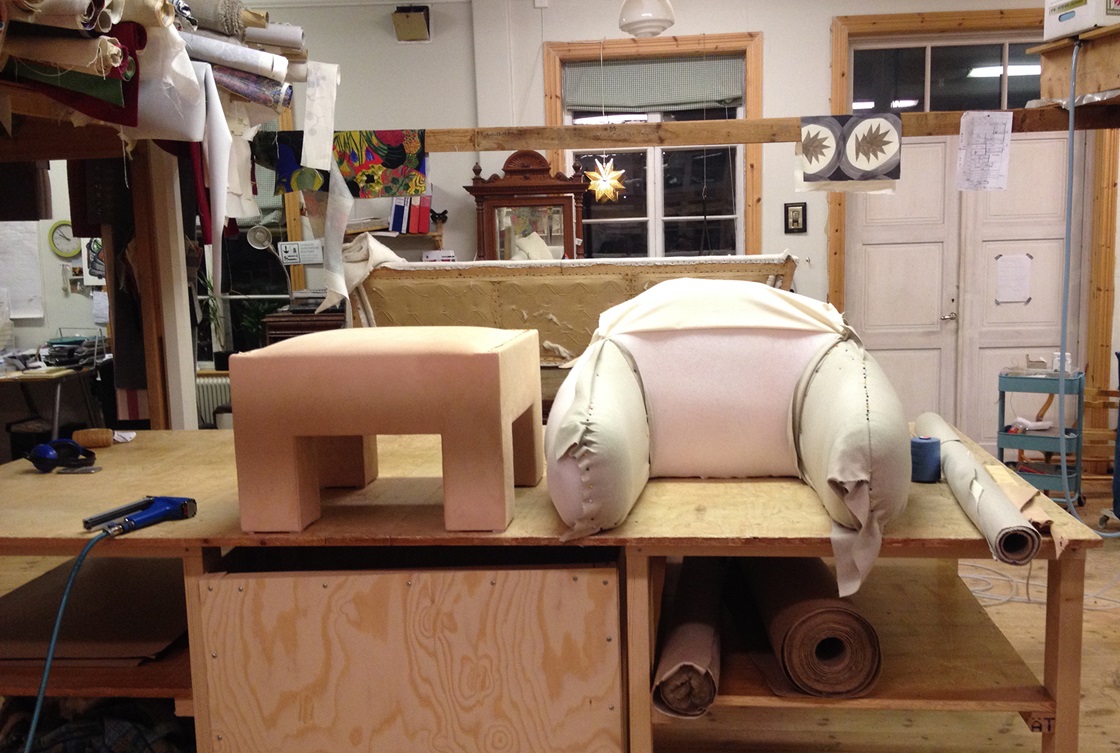 The upholstery of the armchair put Rebecca Petrini severely to the test.
“We carried on refining the design in parallel with construction, and this meant that we had to solve several issues along the way. It was also the first time I had used modern materials. It was particularly tricky to give the organic shape of Mammut the feeling of volume that the design needed.”
Clothing a round shape with upholstery requires advanced techniques.
Two materials meet in Mammut: the back and armrests use traditional furniture material, while the seat is suede.
“It was more troublesome than we had imagined to get hold of suede leather. What we really wanted was Swedish leather that had been tanned using vegetable-based products. We finally found a supplier of red deer leather in Gällivare, and we could use the reverse side of this.” 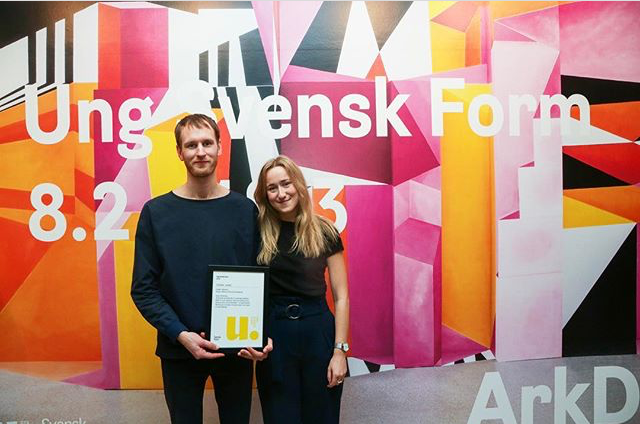 Joel Fjällström och Rebecca Petrini If Joel Fjällström and Rebecca Petrini made a conscious decision to be provocative when designing Mammut, the jury of the Young Swedish Design award did the same when writing its citation.
“Is this a sausage roll or a particularly uncomfortable armchair?”, it asked, with a certain amount of humour.
How did you react to the citation?
“It was a bit weird at first, but the rest of the citation is a better description. You have to be able to take a bit of ribbing,” says Rebecca.
The professionals from the design industry who made up the jury continued the citation in a more serious vein:
“We see a sculptural and intriguing piece of furniture where contrasts meet, confident in design – and schoolmasterish. Mammut does give a soft impression, but it requires a strict posture.”
“Schoolmasterish”? What did they mean?
“I think it’s to do with the fact that Mammut has an angle to the back support that forces you to sit upright,” says Joel.
“I mean – you have to sit quite far forward compared to other more laid-back armchairs. Mammut is more suitable for a conversation or spending time on your own." 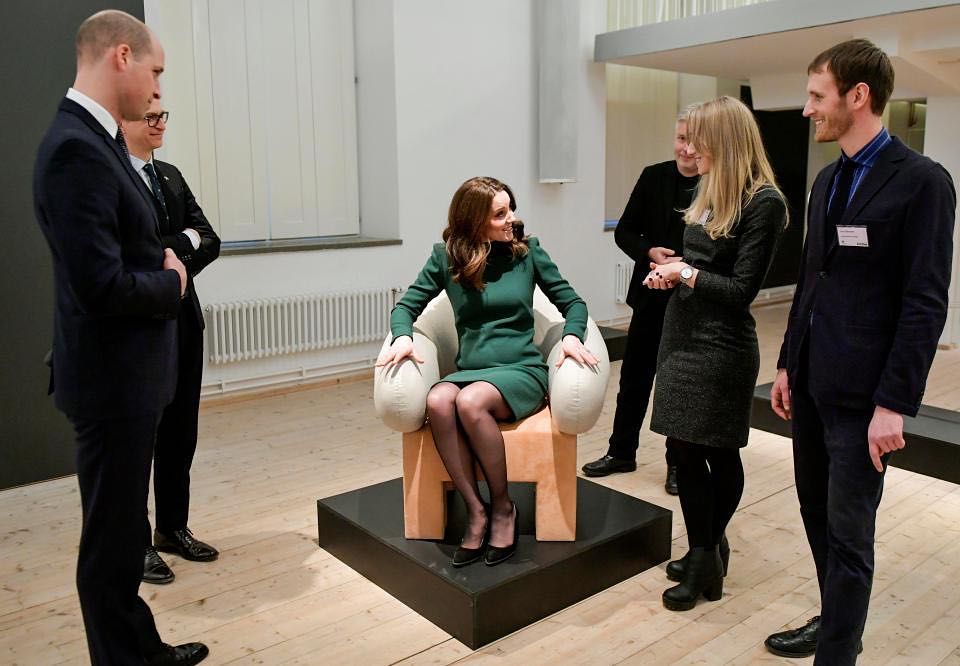 Prince William, Kate Middleton, Rebecca Petrini and Joel Fjällström Photo credit: ArkDesThe British royal family is probably quite accustomed to holding a strict posture.
“It’s very comfortable,” was Kate Middleton’s verdict, after testing the armchair.
Together with her husband Prince William, she came to Stockholm on an architectural visit. ArkDes, the Swedish national museum and centre for design and architecture on Skeppsholmen in Stockholm, was the first place they visited, just as the Young Swedish Design exhibition was ready to open there.
“We were one of four designers given one minute to present our design,” says Rebecca.
So why not make the most of the occasion? The duchess was given the opportunity to sit in Mammut – and the students had a few extra minutes for their presentation.

During the opening of Stockholm Design Week, Joel Fjällström and Rebecca Petrini received an award at ArkDes. This was also the starting point for a travelling exhibition with around 30 contributions that constitute this year’s Young Swedish Design.

The two students have also received a prestigious scholarship from the Danish textile manufacturer Kvadrat.
“I think this is probably the best bit. Kvadrat works with the best designers in developing new furniture textiles. Not only did we receive SEK 10,000, and some time on a visit to Copenhagen, we are also going to exhibit in Kvadrat’s new showroom in Stockholm,” says Joel.

And Mammut will be there, of course?
“Actually, no. We plan to create new objects for that exhibition,” says Rebecca.
So that means many evenings, weekends and long days of summer will again be dominated by furniture design. 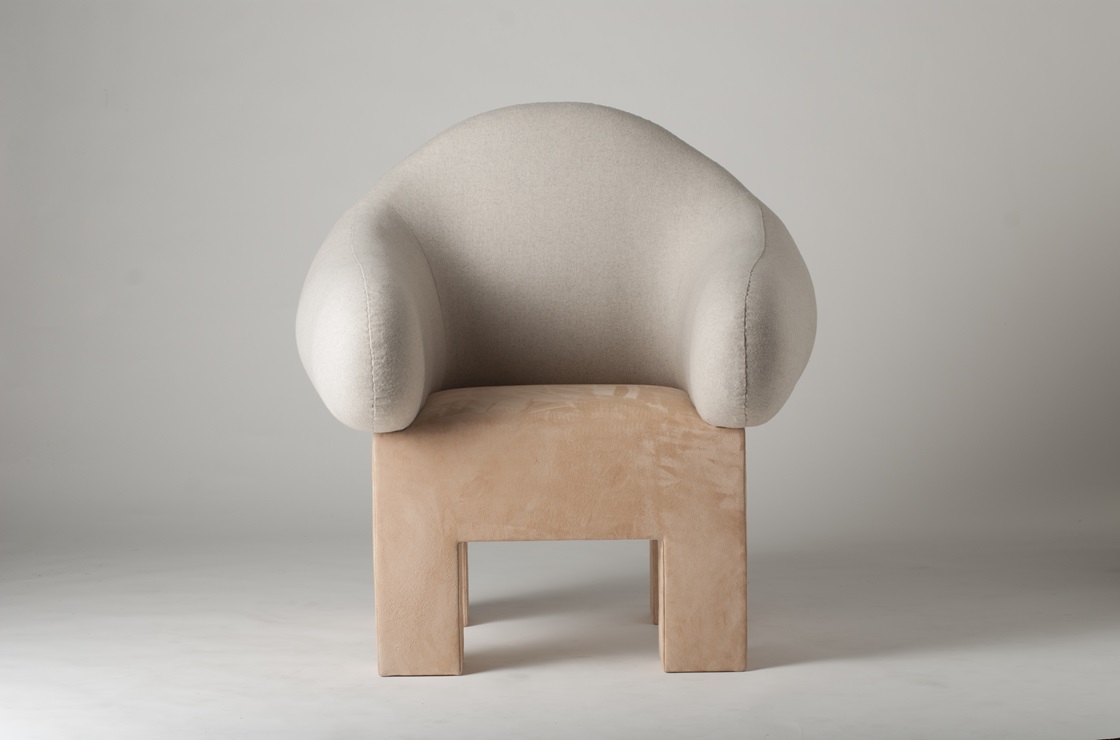