Freedom of speech in focus at Vilks visit

Last week, before the events in Copenhagen, the artist Lars
Vilks visited the Student Association of Foreign Affairs at Linköping University. 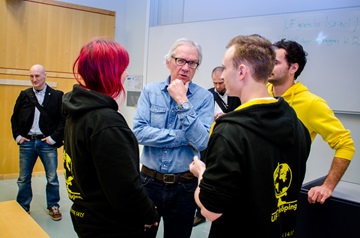 Foto: Hanna SÃ¶derquistThe theme of the evening was freedom of speech, seen through the eyes of Lars Vilks with this experience of his cartoons of the prophet Muhammad and in the light of what happened in the wake of the terror attacks in Paris.

“We are in the age of the offended and the intolerant, where the future of freedom of speech doesn’t look too bright,” was one of Vilks’ messages.

“At present the one who feels offended takes the moral high ground. That’s the crux of the matter.”

He was not just referring here to the reactions to the Muslim cartoons, but for example to pictures of animals that might upset animal rights activists, manga images that could be seen as paedophilia or naked pictures that can be seen as sexist.

“When we demand that art or satire show respect to anyone who might possibly be offended, then we are in effect putting a stop on anything that might annoy someone. This attitude is obstructive and there is a risk it could spread more and more,” Mr Vilks said.

For him a lack of respect in satire is an obvious part of freedom of speech, and tastelessness an important part of a good cartoon.

”Directly after the attack on Charlie Hebdo freedom of speech was loudly heralded. But the noise rapidly died down to be replaced by the need to be careful that freedom of expression was not abused and that people should be considerate to each other.”

A culture of fear

Mr Vilks strongly rejected these arguments and warned that a culture of fear and nervousness was spreading.

“It’s better to print controversial images as widely as possible, that as much media as possible does so. Then the terrorists won’t have a specific target. Violence should never dictate what is published.

“But in the wake of the terror attacks in Paris, fear has risen,” he said.

“The media are running scared now, pointing to the dangers to their staff and their families. And after the threats against Jyllandsposten a few years ago, their editorial offices are now an impregnable fortress of iron and concrete.” 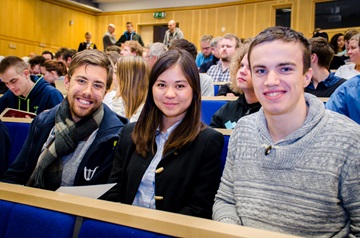 Foto: Hanna SÃ¶derquistMr Vilks’ talk was relatively short and there was time for many questions from the students in the packed hall. Many had follow-up questions about his views on freedom of speech, the responsibility of the artist and the role of art.  Many of them also wanted to know about Vilks’ personal circumstances since his cartoon of the prophet Mohamed spread around the globe in 2010 and he was condemned to death by Muslims. He is alive today but under constant guard. The auditorium was heavily guarded, as was the whole of C Building, with police, guards and ambulance staff during his talk.

“You have to plan everything; spontaneous, sudden things don’t work. I leave my protection in the hands of the experts and they do it very, very well. The King is in the same predicament; if he can manage it so can I,” was one of his jocular comments about his private life.

Isabella Månsson who is studying an Industrial Engineering and Management Master’s with an international specialisation was in the audience. She thought Vilks’ idea of publishing cartoons in so many media as possible in order to reduce the threat was an interesting one. But at the same time she points out how difficult an issue she thought it was.

“I think freedom of expression is important but at the same time we shouldn’t ridicule a religion that is important to people.

Alexander Pattyranie from the same course disagreed with Vilks’ view that we should ignore how people can feel offended by cartoons and other art.

“If someone feels offended we should think twice,” was his comment.

Elsa Boyer de la Giroday from UF was pleased with the evening.

“It was great that so many people came. The subject was controversial and sparked debate, which is one of the aims of the association.”