Gps is not everything

To be able to navigate reliably and without support from the global positioning system GPS is crucial both for fighter planes and for peaceful aerial vehicles on rescue operations. Zoran Sjanic has a solution.
The GPS system is well-developed, and in most cases we can navigate well with the help of all the satellites that are located above our heads. But GPS has its limitations; it is controlled by the United States, it is relatively easy to disrupt, and if you do not have a clear line to four satellites there is not much to rely on.

To be on the safe side, especially if we are thinking about security policy, pilots and unmanned aerial vehicles need to be able to keep track of their exact position – without relying on GPS. It is also very true when unmanned aircraft are to be used for mountain rescue, for example.

A combination of sensors

In the work on his thesis, Mr Sjanic has found a solution. He uses a combination of different sensors: inertial sensors consisting of accelerometers and gyroscopes which measure acceleration and orientation in space, and imaging sensors, primarily cameras and radar. 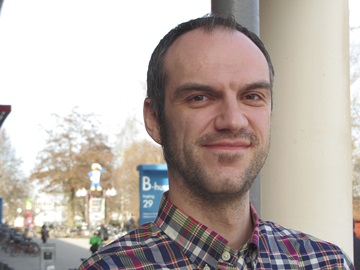 Foto: Monica Westman
“With information from both the inertial sensors and the images, the position can quickly be calculated but it is never exact; there is always a bit of error,” Mr Sjanic says.

These results can be improved using various methods, for example via optimisation, which is the main method Mr Sjanic chose.

“I am working on a method where historical data on how the aerial vehicles have moved over the ground is collected and a flight path, a track of where the aircraft has moved, is made. When we have large amounts of data, we find different structures in the optimisation problem that we can make use of to speed up the calculations.”

If we have the sensors in place that recognise the surroundings we can also build up a map. This method is called SLAM, Simultaneous Localisation and Mapping. The map is compared with a normal map of the area. This also increases precision.

A third method that also increases precision is working with “loop closure”, whereby the computer recognises that “we have been here before”. So the aircraft has yet another secure point to rely on.

“This method might not be so useful for a fighter plane but on the other hand it is effective when a robot is orienting itself indoors,” Mr Sjanic says.

In his thesis he has also described other possibilities for improving precision, but there are naturally some environments that are more difficult than others. A stretch of coastline or a city are relatively easy to navigate, an ocean or desert landscape is more difficult.

“Naturally, accuracy increases the more information the images contain,” he points out.

Mr Sjanic conducted his research as part of Link-Sic, the Vinnova financed centre of excellence, as an industrial PhD student in the Division of Automatic Control at the Department of Electrical Engineering. After defending his thesis last autumn he is now back at Saab full-time to carry out a preliminary study to see how much of the material in this thesis can be transferred to practical applications to support Gripen pilots.

“In an advanced situation there is an enormous amount of information for the pilot to take in, so it is beneficial to remove everything that can be done automatically from the pilot's care,” he says.