Keith Lowton was looking for fresh challenges after cut backs in the pharmaceutical industry took their toll and he and 1200 colleagues were laid-off by Astra Zeneca in February 2012. He decided to apply for the MSc in Statistics and Data Mining. 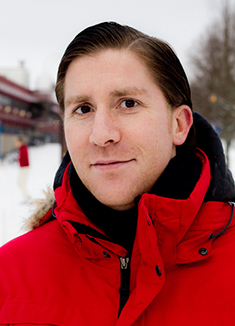 The North Londoner had been working at the company’s large Stockholm operation as a pharmaceutical statistician and decided a career change was needed. So he applied to several universities to study for a master’s degree in data mining - the rapidly growing area of computer science at the crossroads of statistics, artificial intelligence and database management.

Linköping University in Sweden had just the course Keith was looking for, the MSc in Statistics and Data Mining. But he had just missed the main mid-January deadline for applications and  thought he would have to return to the UK as he had offers from two universities in and around London. Then Keith got an email from Linköping University (LiU) saying they were considering late entries. He met the head of the course and thought this is a perfect programme for someone like him with a statistical background, offering both new elements of statistics and also new computer science techniques.

"And here I am, still in Sweden, and very relieved because one of the London universities offering me a place later withdrew their course saying they didn’t get enough students to make it worth running.”

Keith believes that taking two years to do a master’s is an advantage. “It will give me a better grounding. I did a master’s in statistics at Sheffield in one year, which is the norm in Britain, and we were so busy you didn’t have time to breathe. At Linköping, like most European universities, master’s students study in greater depth over two years. Not only can one do self-study and work with lecturers and class mates to gain a better understanding, but students have time to get to know each other, especially useful on an international master’s degree taught in English to students from both Sweden and other countries. Half the students on Keith course are Swedish and the other half are from Africa, Argentina, Italy and Spain. He is the only one from Britain.

"Although I’m a little older than the others we mix and socialise really well together. And having two years here means I can take advantage of the free Swedish language courses."

Studies leading to a career

For Keith, Linköping’s strong career focus was a major attraction.

“My course in data mining offers great job prospects as companies try to make sense of the massive amount of information available to them about their customers. There’s huge demand for specialists able to exploit this new wealth of information to improve analysis, prediction and decision-making. The course director emphasised the possibilities and prerequisites needed for current jobs, with the offer of help and supervision in applying to specific companies for the thesis part of the programme. So I’m sure I’ve made the right move.”

Keith feels having international experience as well as the right skills mix will give him a great competitive edge and it won’t have cost him anything more because university tuition is free to British and other European Union students in Sweden. And as he has lived in Sweden for the past few years he can get Swedish student grants and loans. Keith explains that student accommodation isn’t always easy to find in Linköping, it is still a lot cheaper than living in London. In fact he thinks he could be better off studying in Sweden over two years rather than spending up to £15,000 living and studying in London for a year.

Sweden’s got a reputation for being an expensive country, but I pay less than £400 a month for high-quality accommodation and the cost of food is pretty much the same as at home. It’s only alcohol that’s much more expensive and anyway our student social life revolves around dinner parties in people’s flats before we go to a nightclub or into the centre of town. Different, but perfect to be hitting the dance floor rather than sitting in a pub for four or five hours and going home when the money runs out.”

So Linköping has worked out the perfect fit for Keith, who likes the size and facilities of the campus and the town.

“It is not too big and everyone gets around on safe cycle paths. It is a really student-friendly place and I have no regrets coming here to study.”