Metals worth billions at local tip

The mines of the future may be closer than we think. A degree project from Linköping University demonstrates that landfill at the Gärstad waste facility in Linköping contains metals worth SEK 3 billion.

A waste incinerator and a landfill with varying contents are located at Tekniska Verken, which is a regional utilities facility at Gärstad. As part of their degree projects Ariana Tanha and Daniel Zarate, of the Energy and Environmental Engineering master’s programme, investigated the quantity of metal and even calculated its value. 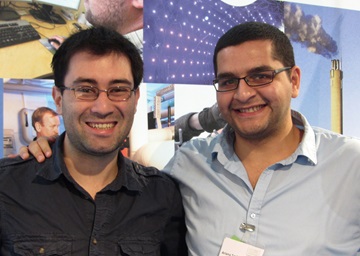 Tanha and Zarate concluded that the metals at Gärstad are worth a somewhat perplexing SEK 3 billion. For example, the stockpile comprises:

“Small amounts of titanium are also present, however since it’s an expensive metal the value still equates to approximately SEK 500 million,” claims Nils Johansson, doctoral student at the Division for Environmental Technology and Management and adviser for both the degree candidates.

Not easy to extract

It’s not simply a matter of extracting the metals, quite the opposite. The largest portion can be found in the ashes dumped in the landfill following waste incineration, which has been on going since the early 1980s.

“Around a third of the metals are located as scrap, however most of it is comprised of small particles. New technology is necessary to be able to utilise the metal content,” Johansson says.

The quality of the metals is unknown; it may not be possible to get the world market price that formed the basis of the calculations.

“Perhaps an important factor is that we’re beginning to look at landfills in a different way. Today the word ‘dump’ has a negative ring to it, and we want to change that perspective. There are also large amounts of valuable raw materials in a landfill. Keeping the current trend of decreasing amounts of metals in the earth’s crust and increasing consumption of metal in mind, the question is not whether, but when, we start looking at landfills as mines,” Johansson says.

In Linköping alone there are 17 municipal landfills and almost 6000 across Sweden; of these only around a hundred are in operation. Apart from metals, landfills also contain other valuable resources such as fuels of various types.

“From society’s perspective, you can wonder whether we really ought to open more mines before we have utilized the amounts of metal embedded in landfills and other inactive stockpiles. Metals retain an economic value; they can also be directly hazardous to the health in the wrong place,” Johansson says.

At Tekniska Verken in Linköping, all waste that enters Gärstad is logged, and frequent tests are performed to identify the waste’s contents, primarily so that dangerous matter is not leaked. However this also means that we have a good idea of the flow of material into the facility.

“We were aware of the large amounts of metals present in the landfills and it will be interesting to get a value placed on them. However more pieces of the puzzle need to be in place before we can make use of the metals,” says Magnus Hammar, at Tekniska verken.

Hammar hopes that new technology will render it economically viable to make use of the metals and that technology is imminent.

A first step for Tekniska verken is to identify methods to better refine the wastes that stream into the facility, and separate the metals as soon as possible. Apart from the necessity for new technology, digging in old landfills would also mean major challenges regarding working environments, laws, and the economy.

“Tanha and Zarate were ambitious; they did a great job,” Hammar states proudly.

“Urban and Landfill Mining” was discussed during two of the 20 sessions at the Greening of Industry Network conference at the Konsert and Kongress venue in Linköping, Sweden.