By emitting photons from a quantum dot at the top of a
micropyramid, researchers at Linköping University are creating a
polarized light source for such things as energy-saving computer screens and wiretap-proof communications.
Polarized light – where all the light waves oscillate on the same plane – forms the foundation for technology such as LCD displays in computers and TV sets, and advanced quantum encryption. Normally, this is created by normal unpolarized light passing through a filter that blocks the unwanted light waves. At least half of the light emitted, and thereby an equal amount of energy, is lost in the process.


Polarization right at the source 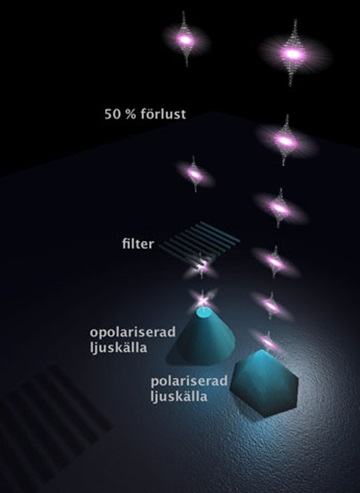 A better method is to emit light that is polarized right at the source. This can be achieved with quantum dots – crystals of semiconductive material so small that they produce quantum mechanical phenomena. But until now, they have only achieved polarization that is either entirely too weak or hard to control.

A semiconductive materials research group led by Professor Per Olof Holtz is now presenting an alternative method where asymmetrical quantum dots of a nitride material with indium is formed at the top of microscopic six-sided pyramids. With these, they have succeeded in creating light with a high degree of linear polarization, on average 84%. The results are being published in the Nature periodical Light: Science & Applications.

“We’re demonstrating a new way to generate polarized light directly, with a predetermined polarization vector and with a degree of polarization substantially higher than with the methods previously launched,” Professor Holtz says.

In experiments, quantum dots were used that emit violet light with a wavelength of 415 nm, but the photons can in principle take on any colour at all within the visible spectrum through varying the amount of the metal indium.

“Our theoretical calculations point to the fact that an increased amount of indium in the quantum dots further improves the degree of polarization,” says reader Fredrik Karlsson, one of the authors of the article.


The micropyramid is constructed through crystalline growth, atom layer by atom layer, of the semiconductive material gallium nitride. A couple of nanothin layers where the metal indium is also included are laid on top of this. From the asymmetrical quantum dot thus formed at the top, light particles are emitted with a well-defined wavelength.

The results of the research are opening up possibilities, for example for more energy-effective polarized light-emitting diodes in the light source for LCD screens. As the quantum dots can also emit one photon at a time, this is very promising technology for quantum encryption, a growing technology for wiretap-proof communications.