Challenging austerity in the Baltics

The Baltic states are often described as good examples of how austerity can be used to overcome a financial crisis. A book on the downsides of austerity edited by LiU’s Professor Charles Woolfson has made waves worldwide. 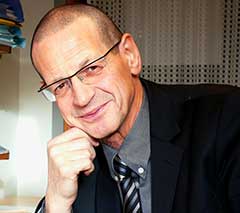 Together the Baltic states have a population of only about six million, a figure which has dropped since 2000. Estonia has lost five per cent of its population, Latvia ten and Lithuania even more. “The Contradictions of Austerity: The Socio-economic Costs of the Neoliberal Baltic Model”, edited by Charles Woolfson, professor in labour studies at Linköping University, and Jeffrey Sommers, associate professor at the University of Wisconsin-Milwaukee, explains why.

After decades as part of the Soviet Union, Estonia, Latvia and Lithuania shifted rapidly to a far-reaching neoliberal capitalism. Then came the financial crisis of 2007 and 2008. The countries’ reaction to this was austerity: radical government measures to reduce budget deficits. In the case of the Baltics, this included cuts to salaries and pensions.

Estonia, Latvia and Lithuania are often described – for instance by the European Commission – as good examples of how a country can overcome a financial crisis and get back on its feet. Unemployment has fallen, although it is still high, and gross domestic product (GDP) is roughly the same as pre-crisis. But Professor Charles Woolfson from Linköping University doesn’t agree that the Baltic states’ recovery has been exemplary:

Why has the book generated so much interest?
”In today’s European landscape, with our current financial situation, people are looking for arguments that explain why the austerity policies aren’t working. Reasoning that can be used against large actors such as the European Commission. Our book makes a contribution to this.”

The book concerns the Baltic states, but it’s also relevant to the current difficulties in southern Europe.

You coined the term ”austeriat”. What is that?
”The austeriat are the people who have suffered from the radical austerity policies. Who have taken the financial and social consequences. It’s the people on the fringe, who have had their power stripped away and been forced into a hopeless form of migration. They aren’t gold diggers, they’re families trying to survive.”

”We see an increase in Baltic immigration to Sweden at the moment. But Sweden has an exclusive labour market, even if the Swedes like to say the opposite. The main migration targets for people from the Baltic states are Germany, Ireland, the UK and Norway.”

You’ve almost done a world tour with your lectures on the book. Where have you been?
Last year I gave talks at a number of universities in Australia, and I’ve visited many countries in Europe. Tomorrow I depart for New Zealand and a week after that I head to Harvard and Brown in the United States.”

Is this a controversial book?
”We are challenging current economic orthodoxy. Who says there is no alternative to austerity? We show the profoundly damaging economic and social costs this has had on the populations of these countries. But our critique is not only of Baltic neoliberalism but also of the European Commission and the international bankers. Is it controversial? Absolutely.”