Combating osteoporosis before a hip breaks

One in five women, and one in ten men, in Sweden can suffer a broken hip due to osteoporosis. But a simple hand x-ray can detect the problem before any bone fracture occurs.

Despite the fact that the number of Swedes who break a hip is among the highest in the world, we are well below the EU averages for amounts invested in combating osteoporosis. In monetary terms, osteoporosis-related fractures cost an estimated SEK 14 billion annually.

One method of detecting osteoporosis has been studied by industrial PhD student Johan Kälvesten, who is now presenting the results of his doctoral thesis. The method, called digital x-ray radiogrammetry, is supplied by Sectra, a Linköping company.

“This is a way of measuring bone mineral content in the skeleton and is based on a simple x-ray of the hand. The images are sent to a computer, which analyses the qualities of the bone. The results are then automatically sent back to the patient’s medical log,” Mr Kälvesten says. 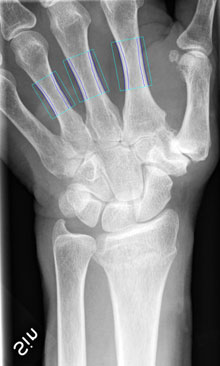 As a part of studying this method, he analysed tens of thousands of x-ray images of hands and then checked which people subsequently suffered fractures. The results showed that those people who have low bone density in the skeleton of the hand are at great risk of breaking their hip later in life.

As there are effective drugs for strengthening the skeleton, many broken bones could be avoided by screening and treatment of those people at high risk of fracture. Trials have been carried out to combine x-ray radiogrammetry of the hand with mammography and it turned out that the extra element did not noticeably affect or delay the work.

Mr Kälvesten has a master’s in engineering physics and electrotechnology and divides his time between research at the Center for Medical Image Science and Visualization (CMIV) and Sectra. The project has involved everything from radiation physics, signal processing and computer vision to cell biology, clinical trails and statistics.

Picture: Bone mineral density is measured automatically in the marked area of the bone of the middle of the hand.