Refugee children who come to Sweden and seek asylum together with their parents risk being overlooked, not getting any systematic help with school, healthcare and other care. There is no functioning system for them, in contrast to the unaccompanied refugee children, for whom responsibility is more clearly allocated. 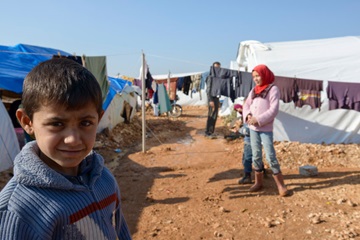 This is according to a recently published report by LiU researchers, conducted on behalf of Forte, the Swedish Research Council for Health, Working Life and Welfare.

“For the children who arrive in Sweden with their asylum-seeking family, the reception depends on how knowledgeable and proactive the parents are. There is no public body to safeguard the rights of these children. So it all becomes a bit ad hoc, for instance which children get to attend school. Unlike for the unaccompanied minors, where there is a system with the social services, guardians etc., who take responsibility,” says co-author Karin Zetterqvist Nelson, professor at Child Studies in the Department of Thematic Studies.

The report is an overview of the Swedish reception in autumn 2015, and of how its structure could be improved.

The most important results are summarised in seven points. In addition to the risk of children with families being overlooked, the results show that the long wait and the uncertain time frame are also stressful for the children, and that recently arrived children live parallel lives from their Swedish counterparts. They tend to be marginalised, because of delays and problems in the integration process.

The conclusions also highlight the importance of collaboration between civil society and the public sector, and to the consequences of each having targets that are governed by different laws and regulations.

“Civil society can play a large part in improving integration and preventing alienation, for instance with sports. But the reception process is complicated, there is a great number of bodies in the public, private and civil sectors. This makes it difficult to say who is responsible, and it can hamper collaboration and various other efforts. Here we need to clearly say who is responsible for what. Otherwise there is a risk of paralysis.”

Critical of the 'crisis' rhetoric

The report includes interviews with local government representatives from the Swedish towns of Laxå, Boden and Botkyrka, which have all received large numbers of refugees.

“They are somewhat critical of the ‘crisis’ rhetoric that was used by politicians and media in the autumn of 2015. The problems were considerable, but they were dealt with, and the people who worked with these things hope that in future there will be more flexibility and openness to innovative solutions.”