Efficient turbines that generate more and more electricity are
the goal of Mikael Segersäll’s research. In his doctoral thesis, he
studied the inside of superalloys in order to answer the question of how and why materials crack.
Gas turbines are used to generate electricity and they are also increasingly being used to balance out electricity production when the sun is hidden behind thick clouds or when there is no wind. The blades in the turbine are the parts exposed to the greatest stress, particularly when the turbine is started up and switched off. A lot of research has now been devoted to finding the best and most durable material – crucial when the turbine is in an aeroplane engine, but also important for electricity production.

"Previously, gas turbines used for electricity production were mostly in continuous operation. They might be switched on and off 500 times in their lifetime. But now that they are increasingly being used for reserve power, they need to endure being started and stopped 5 000 times or more,” says Mikael Segersäll, newly graduated doctor of Engineering Materials at Linköping University.

The gas turbine blades are cast in various nickel-based “superalloys”, where various substances have been added to enhance the properties of the material. These materials are relatively weak at room temperature but develop super strength at high temperatures. Of course a gas turbine works better – it’s more efficient – the hotter it gets, but the operational temperature is often up around 1 000°.

These superalloys also have another advantage: While most metals consist of small grains that are strewn all over the place and form crystals, superalloys can be cast as one single crystal. This is also the key to their being so durable – there are no grain boundaries where cracks can appear.

But even monocrystalline materials gradually become fatigued, which means small cracks form in the material and lead to a breakdown – or in the worst case a catastrophic breakdown, if the turbine blades are not changed in time. This is where Mikael Segersäll’s research comes in. The Engineering Materials research group at Linköping University are specialists in looking inside superalloys. Hitherto there have been unknown phenomena that occur in the crystal when it is subjected to repeated stresses in the form of high pressure and high temperature.

“The more we know about the phenomena that lead to cracks, the better computer models we can make. We are learning how we can affect durability, and also how we can simulate and predict when a certain material begins to be fatigued and a turbine blade needs to be changed, for example,” says Mr Segersäll.

In his doctoral thesis he studied some different superalloys, including a completely newly developed one that Siemens Industrial Turbomachinery is very interested in. 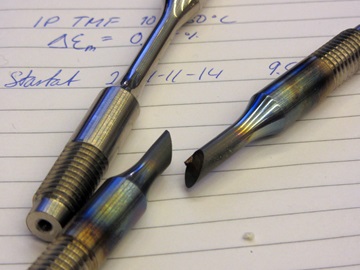 In the laboratory he subjects samples of the material to high mechanical load interchanged with high temperature to produce what's known as thermomechanical fatigue. The tests will simulate how a turbine starts up at low pressure and low temperature, is put up to full speed where the pressure builds up and the temperature increases to 850°, and then after a few minutes is switched off and let cool. Again and again and again. The sample in the picture on the right has survived over 1,400 cycles and show no signs of wanting to break. When a breakdown does occur, the sample is moved to a scanning electron microscope, where the crystal structure is examined at the atomic level.

In one of the articles in the thesis, Mr Segersäll studied an alloy where in addition to the other alloy substances such as chrome, copper and aluminium, he also added silicon.

“The lifespan of the material is doubled when it is alloyed with silicon,” he explains.

In addition to subjecting the material to stress and heat time after time the research also consists of finding material combinations that can tolerate even higher temperatures. The higher the operational temperature, the more efficiently the gas turbine runs.

“The material will survive both high loads and high temperatures, which is important for efficient, safe and environmentally friendly electricity production,” says Mr Segersäll, who was also a part of Agora Materiae, a cross-disciplinary materials science research school at Linköping University.

“The thesis makes several important contributions to research around thermomechanical fatigue and I note that three of the articles have been published in very high-ranking journals,” was the praise from the French faculty examiner, Assistant Professor Jonathan Cormier, Institut Pprime.

Research school Agora Materiae
Looking inside a superalloy, the phenomenon is described on LiU’s research website 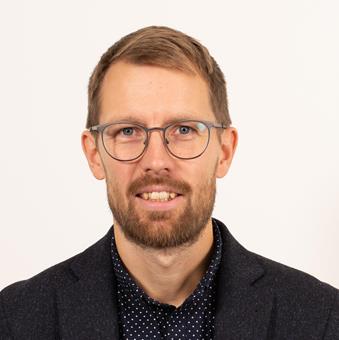