Mediterranean crisis is brought to students

At a guest lecture, students at Linköping University found out how the Swedish Coast Guard executes a rescue mission in the Mediterranean Sea. 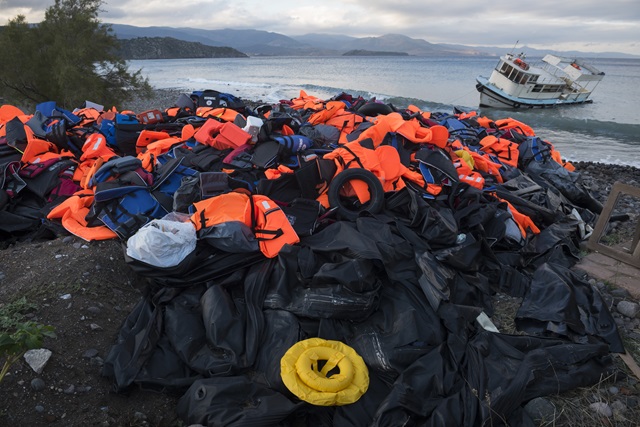 Photo credit: JOEL CARILLET“On the Mediterranean, the first thing you see is the red coastline. But it’s actually discarded life jackets on the shore,” says Kenneth Neijnes, operations manager at the Swedish Coast Guard, as he holds up a plastic life jacket that looks more like a pool toy than something that can support a human at sea.

Together with Frontex, the EU’s border patrol agency, the Swedish Coast Guard participates in operations on the Mediterranean. Based on the Greek island of Lesbos, they patrol the sea and the Greek-Turkish border. Their aim is to find people crossing the border, and make sure they get to shore. Mr Neijnes has personal experience of working in the area, and is in charge of Swedish operations.

“Some rescue operations are very tragic. Once we found 51 bodies in a boat that had become a death trap. But when you save someone, you’re happy with your job.”

Mr Neijnes’ visit to Linköping University is part of the course Business Administration 1. During the autumn's first module, the students study organisations, their structure and strategies. As part of this, a guest speaker uses their organisation as an example, explaining how it acts in different situations. The initiative is a collaboration with CARER, the Center for Advanced Research in Emergency Response at Linköping University.

“Our students must be well informed regarding society and its various organisations. Safety and rescue are important, growing areas where international developments affect us. Consequently it’s important that we reflect this in our teaching at LiU,” says Rebecca Stenberg, course coordinator.

In addition to the Coast Guard, the organisation Missing People has addressed a packed lecture theatre at LiU’s Centre for Teaching and Research in Disaster Medicine Traumatology.

In 2015 hundreds of thousands of women, men and children saw the Mediterranean as the only way out of an insecure existence. The Swedish Coast Guard rescued 8140 of these people. Kenneth Neijnes paints a picture of an assignment that is often extremely complicated, since it involves the collaboration of many different countries; the possible threat of weapons; maintaining full control of an unstable boat in an emergency situation and rescuing people in mortal danger.

With the tightened legislation for asylum in the EU, including Sweden, fewer people are attempting to cross the Mediterranean.

“We’ve noticed that the migrants don’t want to come to Sweden to the same extent – they’d rather go to Germany,” says Mr Neijnes.

Joe Mousson, a business administration student, was engrossed by the lecture. It didn’t only benefit him as a student, but also in his job. Alongside his studies he works at a refugee home, and has met people who survived a Mediterranean crossing, and continued all the way to Sweden.

“I‘ve heard these stories before, from the people I work with at the refugee home. But this lecture gave me a better understanding of what they experienced at sea. Hopefully I can benefit from this insight in my work.”