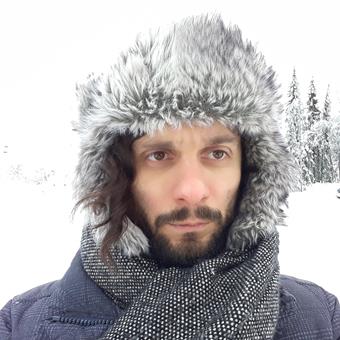 My research works in a post-disciplinary space between art and environmental humanities, and investigates entanglements of climate and social justice in the areas of intense exploitation of ‘natural resources’.

The research project 'water is (non)life: de-extractivist poetics in the semi-periphery' is a practical investigation into a place-based political poetics of solidarity with emergent water and earth protectors social formations in the South-East Europe.

Extractivism usually relates to industries such as mining, forestry, agriculture, fishing and energy sector, which remove large volumes of so-called ‘natural resources,’ some classified as renewable and others non-renewable. Since the beginning of modernity, this complex of industries have been one of the core modalities of capitalist expansion into a world-system, closely linked with historical colonialism and imperialism, as well as their more contemporary iterations. Furthermore, similar structural modalities of appropriation and accumulation have been tracked and mapped in a range of other socio-economic activities – e.g. tourism, digital technologies, real-estate development, as well as culture - so that now there is a broader understanding which sees extractivism as one of the general paradigms underpinning the entire fabric of late technocapitalism.

Corresponding to its global advancement, opposition and resistance to this ‘resourcing’ logic has been and is currently one of the principal areas of social organising for climate and social justice. The research is situated in the socio-environmental geographies of the south-eastern ‘semi-periphery’ of Europe, where natural and human bodies are currently exposed to a number of extraction activities and their impacts. The project works on creating a ‘de-extractivist poetics’ performs in listening and shared conversation with the communities who opt-out of accelerated, large-scale and unsustainable exploitation of their other-than-human neighbours and themselves, and decide to reground a common life in mutuality, care and social reproduction. The project interacts with nature and society through place-based performances, cultural events, and publishing.

mirko nikolić completed a PhD at the Centre for Research, Education in Arts and Media at the University of Westminster, London, with the thesis titled “minoritarian ecologies: performance before a more-than-human world.” Subsequently, mirko has led a two-year art and research project “what do rare earths deeply want?” with Kone Foundation funding (2017-2019).

Performances in art and cultural contexts

Together with trans- and post-disciplinary academic work, mirko actively exhibits and performs in art and cultural contexts.

mirko nikolić (2017) ‘all that is air melts into city: minoritarian apparatuses for a more-than-human world’, in A. Philippopoulos-Mihalopoulos & V. Brooks (eds.) Research Methods for Environmental Law, Edward Elgar Publishing. Read it here.

mirko nikolić (2017) minoritarian ecologies: performance before a more-than-human world, PhD thesis, Centre for Research and Education in Arts and Media, University of Westminster. Read it here.

The department includes professional languages, English as well as research and teaching in the field of interaction studies.