A lift for aero and eco studies

Cold and hot streams flow smoothly through the gas turbine on the display. A new gas turbine and aircraft engine simulator is a valuable new addition to Linköping University’s master’s programmes.
It is cramped at Linköping University’s A Building, with so many different operations competing for space. Jörg Schminder, doctoral student at the division of Applied Thermodynamics and Fluid 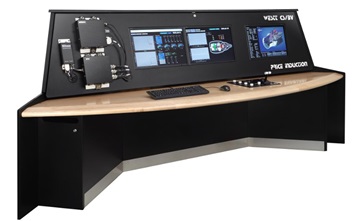 Mechanics is going to show us the latest addition to the engineering programmes – a gas turbine and aircraft engine simulator. But first we have to wind our way through two doors, into a lab room and then into a little cubby hole. In any case, here it is, and many students have already found their way in here, despite it only being operational since New Year.

Not just for aeronautical engineers

Of course, gas turbines and aircraft engines make you think of the university’s programme for aeronautical engineering, but also for students in energy-environment-management and mechanical engineering. Because gas turbines are central to the development of fossil-fuel-free energy systems.

“We needed some sort of equipment for the course on gas turbine technology, and for teaching purposes, it doesn’t matter if the gas turbine is on the ground or in the air, in an airplane,” says Mr Schminder.

He searched around, and found that fewer and fewer universities have operational gas turbines for teaching purposes. They are expensive to run and maintain, and require high levels of safety. Which the French jet engine developer Price Induction realised. A new business concept emerged when a nearby university came knocking, and wondered if it was possible to copy the simulation environment for teaching purposes. 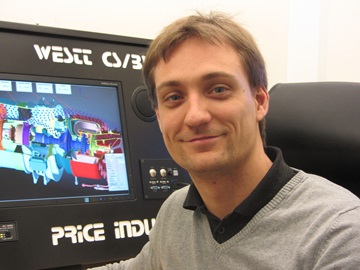 Photo credit: Monica WestmanIt’s a young company and they listen to us teachers. Our ideas are implemented quickly. Several other universities have bought the simulator, so there’s a good chance our international students have already worked in that environment. They can bring their previous results, and continue here,” says Mr Schminder.

He has tested the simulator in part of one course, and found that learning to use it was very intuitive. When the students see immediately how various parameters affect flows and performance, it is much easier to understand how the technology works.

Gasturbinsimulator“It’s important that the students can sit here and do their assignments without me standing next to them the whole time.”

Of course, a simulator has the benefit that you can test various boundary conditions, for instance what happens at an elevation of 10,000 metres or in extreme heat or cold, as well as what happens when a boundary is crossed.

The gas turbine simulator is also directly connected to a small flight simulator. When Mr Schminder starts the plane and takes off, on the displays I can see exactly what is happening in the engine. And a breakdown only means new knowledge, and that you have to restart the system. 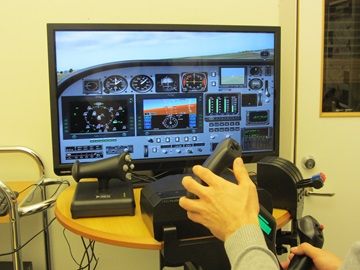 Photo credit: Monica Westman“I hope we will have a slightly more realistic environment soon, with a real cockpit and a large display, but this is a good start,” he says.

At the division of Fluid and Mechatronic Systems, Patrick Berry coordinates the course in aircraft design. The idea is that the students develop their own aircraft model based on the jet engine from the simulator. The model is then used in the simulator, for use in the course on gas turbine technology.

The simulator is mainly used to train students at Linköping University. However contact has also been made with aeronautical engineering training at Anders Ljungstedts Senior High School, and both Saab and Siemens Turbomachinery have expressed interest in the system.

“We also have very talented engineers and doctors from there who do guest lectures in our courses, and we’re very grateful for this,” says Mr Schminder. 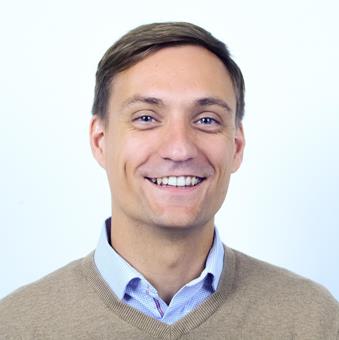