Fredrik Löfgren and his teammates are fed up with having their bikes stolen. They have developed an ingenious solution that also makes it easier to get hold of a bike when you need one. Their idea won the Best Project prize at this year’s East Sweden Hack. 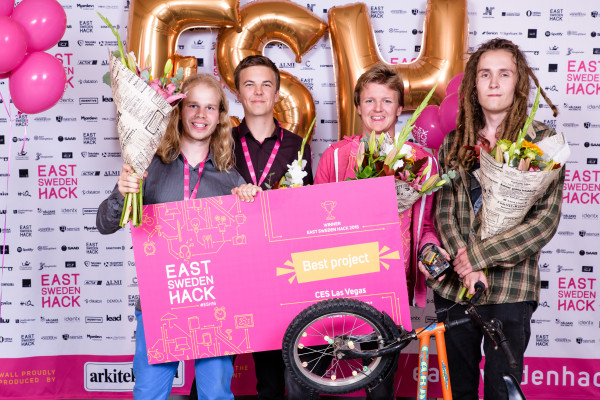 Photo credit: Christian Johansson/Crelle Photography
LiU student Fredrik Löfgren is not just a skilled programmer with the ability to stimulate children to start coding: he is also a source of great ideas and has the ability to bring them to reality. His team has won this year’s East Sweden Hack, in competition with 19 other teams, including participants from Brazil, the Netherlands and China.

Fredrik Löfgren, Sebastian Gustafsson, Erik Örjehag and William Sjöblom won the Best Project prize with a solution that sounds an alarm if you forget to lock your bike. The bike is also equipped with a GPS system, such that you know where it is at any time. The system makes it possible to hire out the bike to someone who needs it, if you are, for example, on holiday. The prize is a trip to the huge consumer electronics trade fair CES in Las Vegas, January 2017.

The jury’s motivation:
“This team has launched a solution for shared economy that encourages people to change transportation behaviour, connecting to existing Airbnb services, includes IoT, benefits both mobility and the environment. ... This idea acts both as a bike lock on its own, while also generating revenue through the rentals.”

Four prizes each of SEK 20,000 were awarded in the categories Integration, Healthcare and Medical Care, Civil Environment and Transportations, and Energy and Sustainability.

This weekend it’s time for the 2016 East Sweden Hack. Equipped with open data and creativity, 20 teams will take part, with the aim of solving important challenges facing society.