Linköping University and Ericsson have had a special relationship for at least 20 years. On Tuesday the collaboration was formalised further, in a strategic agreement that stretches ten years into the future. 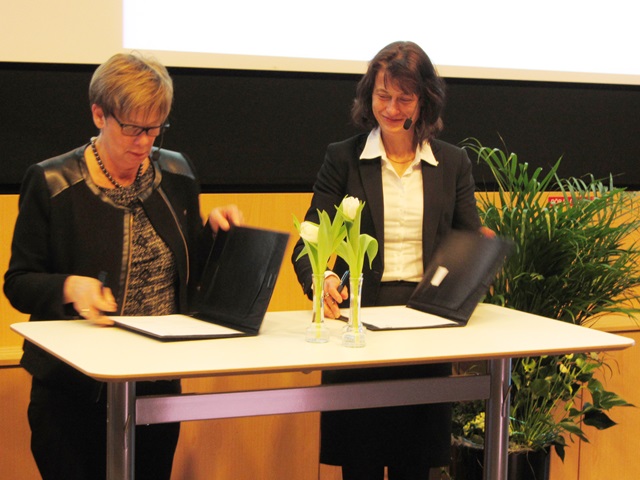 Linköping University and Ericsson have had a special relationship for at least 20 years. It has been in the form of graduation projects, research exchanges and other collaborations, and LiU has supplied Ericsson with graduates from all levels.

“We’re a global corporation with research at many locations around the world, but a good deal of it is concentrated in Sweden. For us the most important universities are KTH, Chalmers, Linköping and Lund – in no particular order,” said Sara Mazur.


According to Ericsson’s predictions, in 2020 there will be 26 billion connected devices in the world, and the biggest increase is in the field of machine to machine, i.e. the Internet of Things.

“Everything that benefits from being connected will be connected. Everything with some sort of intelligence: coffee machines, cars, fridges - almost everything.”

Of course, all the connected devices and the services related to them place much tougher demands on the networks, such as higher speed and capacity, and better accessibility and safety.

“But we have successfully developed four generations of mobile networks, and we’ll manage the fifth as well, hopefully together with Linköping University.”


Two major initiatives in the region were highlighted in the presentations that preceded the signing of the agreement. One was Ericsson’s huge data centre, one of three in the world, soon to be completed in Linköping. The other was the research programme WASP, Wallenberg Autonomous Systems Program, where Ericsson is one of the major industrial stakeholders.

“It’s a fantastic joining of forces in fields such as vehicles, robots and people, systems of systems and software. Because if the processor is the heart of a computer system, the software is the soul,” said Torbjörn Lundahl, head of Ericsson’s national research initiatives and Ericsson’s 5G for Sweden.

He hopes that one of the demonstrators that will be built up within the WASP program will be the arena that Ericsson and Saab are jointly working for here in Linköping: Autonomous Research Arena, ARA.

“We will be able to test the connected city, we can connect all of Linköping and we can connect events like the Bråvalla Music Festival,” Torbjörn Lundahl said.

“We have had a strong collaboration with Ericsson for many years, especially in education. Close ties to the industrial sector are important for our students and our research, and it is valuable for us that we can now extend and deepen our collaboration,” said LiU Vice-Chancellor Helen Dannetun.

The strategic collaborative agreement is LiU’s fifth; in addition to Ericsson LiU has 10-year strategic agreements with VTI, ABB, Saab and Tekniska verken.